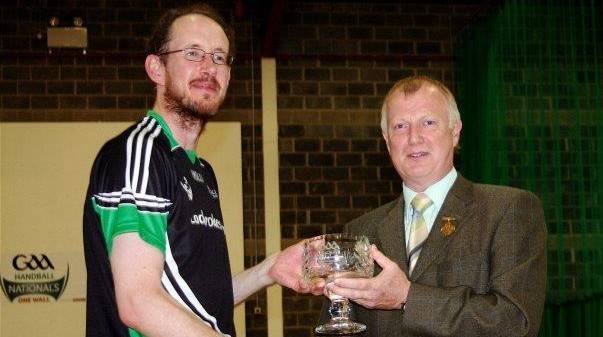 Eighteen English Fives players went to County Mayo for the Irish One-Wall Handball championships, writes Peter Cohen. Players entered a range of competitions, dependent on experience, and all matches apart from finals were timed at either 15 or 20 minutes, with the winner being the one with most points when time is called.

Play in the men’s Challenger and ‘C’ grades began on Friday, with Rich Price, Gareth Price, Simon Thomas, Luke Stradwick, Andy Pringle, Doug Foster and Stu Fautly all recording wins. Doug and Simon’s games were tight, but the rest of the matches were dominated by the English. Gareth also played his second round on Friday, and turned on the style, beating the former ‘C’ grade champion and second seed to reach the quarterfinals. Ryan Perrie and Ant Theodossi, meanwhile, lost close first round games to leave the English having won eight matches and lost just two by close of play – an imperious start.

Saturday morning saw the start of the Open grades, featuring Adrian Lee, Dan Grant, Peter White and Peter Cohen in the men’s draw, and Kerry White and Ashley Lumbard in the women’s. Lee recorded a 30 – 6 victory in his first round with notably quick feet, while Grant, White and Cohen fell to vicious spin serves that would prove to be a deciding factor in the tournament. Kerry had a comfortable win in her first round match, while Ash couldn’t quite match her more experienced opponent.

Meanwhile, Anita Ganguly, Emmalina Thompsell and Jess Lumbard began their campaign for the Ladies Challenger Cup, the players split initially into two round-robin groups. Anita and Jess played superbly in their half, winning most of their games, with Jess finishing top after a win over Anita to reach the final. In the other group, Emmalina couldn’t quite finish top, but did record a 21-20 win in her final game.

As Saturday progressed, Fautly and Thomas were eliminated from the Men’s Challenger, with Foster and Stradwick battling through for a place in the quarter-finals, where they clashed in the game of the tournament so far. It saw epic rallies with huge commitment from both, but Foster won through 14-13.

In the Men’s Open, Lee faced top seed Dessie Keegan and drew a big crowd. The Irish international was troubled by Lee’s footwork and retrieving from the start, and halfway through, Lee pulled off some outrageous winners to bring the scores level. Keegan’s experience and power eventually won the match, but Lee can feel delighted with his performance and improvement from last year.

Not to be outdone, Cohen, White and Grant all knocked out Irish players in the first round of the Open plate, proving they belong at this level. Cohen then faced Grant in an all England semi-final, with Cohen winning 15-12 after Grant drew the scores level with a thrilling comeback from Cohen’s early lead. In the final, Cohen faced Darragh Daly, who had narrowly beaten White in the other semi, and the Englishman won the competition with a grueling 16-15 win.

The quarter-finals of the Ladies Open drew together Kerry White and Marianna Rushe, arguably the top players in Europe. In rallies, White had the Irishwoman on the back foot for the majority of the match, but it was Rushe’s set-piece serve and return that eventually won the contest. Meanwhile, Ash Lumbard scored a brilliant victory in the ladies open plate, playing her best ever to defeat a strong Irish opponent. In the Men’s Challenger, Pringle battled to an impressive semi-final win, while Foster in the other semi was knocked out, preventing an all-English final. Pringle squared up against Creamer in the final, a best-of three-sets match, and swiftly established his authority and class to take the title two sets to nil.

The tourists’ final match featured Jess Lumbard in the Ladies Challenger final. After winning the first set, she struggled in the second as her opponent changed tactics to tie the score. The Irishwoman raced into an early lead in the decider, before Lumbard slowly crept back to level the scores, and went on to take the title in the most thrilling match of the tournament.

Over the weekend, the English played 53 matches, winning 31, and brought home three titles – a brilliant achievement and a sign of the huge improvements made since last year. Socially, too, the tour was a great success. Saturday evening saw the hosts, the Gaelic Athletic Association, put on a fabulous barbeque, and their hospitality and organization throughout the weekend was first-rate. We look forward to taking even more players to Ireland next year, and hopefully winning even more matches and titles. Next stop, Portland for the World Championships.