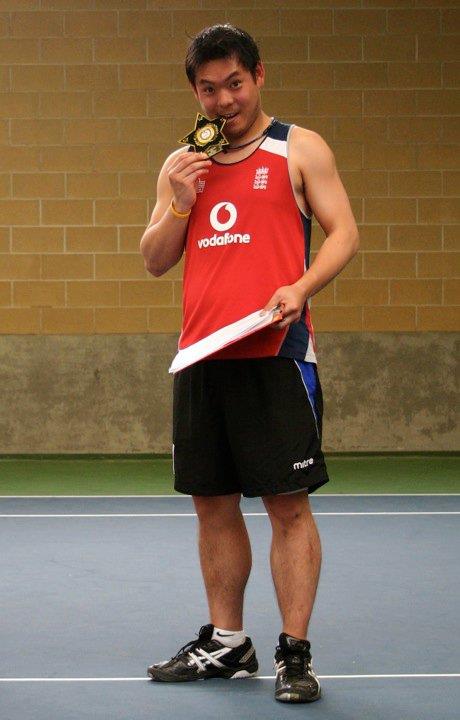 With players from as far afield as Wales, Ireland and Belgium joining the English handballers, there was a real international flavour to the 31 players in this year’s UK Open Handball Championships. In the end, though, it was home-grown players who picked up the day’s top trophies.

There were separate competitions for men and women, with the men’s split into two categories – Open and Challenger – but every competition began with a group stage, and the top players from each group qualified for the knockout stage. With every match played to a strict 15-minute time limit, the action throughout the day was fast and frenetic, with some players literally throwing themselves around the court in a desperate bid to return the ball.

The final of the women’s competition was an all-English affair, and saw Kerry White confirm her position as England’s top player with an emphatic win over Ashley Lumbard.

The Men’s Challenger category saw a real mix of players, and in the end, the final was played out between Irishman Fintan Creamer ( runner-up in the same category in the Irish National Championships) and top-ten-ranked Rugby Fives player Will Ellison, who was trying handball for the first time.

Perhaps amazingly, Will took the first game in the best-of-three final, only to see Fintan take a tight second game to send the match into a decider. Here, after a tentative start from both players, eventually it was Fintan’s greater experience that proved crucial, taking him through to a well-deserved win. Ireland was also the destination for the Men’s Open Plate, after Tadgh Carroll beat Anthony Theodossi.

In the Men’s Open, there was plenty of local success, with no less than five of the eight quarter-finalists coming from England: the country’s top four of Ady Lee, Pete Cohen, Dan Grant and Pete White joined by RFA General Secretary Andy Pringle.

The draw meant that at least two had to fall at this hurdle, though, and while England captain Ady overwhelmed fellow RFA board member Andy, the EFA’s Pete Cohen had to play his best to edge out Dan of the RFA. Also falling at this stage was EFA member Pete White, who lost out to Justin Evans from Wales. The last quarter-final, meanwhile, was an all-international affair, and saw Belgium’s Bastien Van Nuffelen knock out Welshman Keith Wilde.

Sadly, hopes of an all-English final were dashed when Justin beat Ady in their semi-final; and, for a while, it looked as if there might be no Englishman at all in the final, as Pete Cohen was 9-11 down to Bastien with just a couple of minutes to play in their semi-final. However, showing true grit and determination, Pete rallied at the crucial time, and managed to close the game out 13-11. It was this form that he carried through to the final, where his hard hitting and fine athleticism carried him through to a comfortable win over Justin.