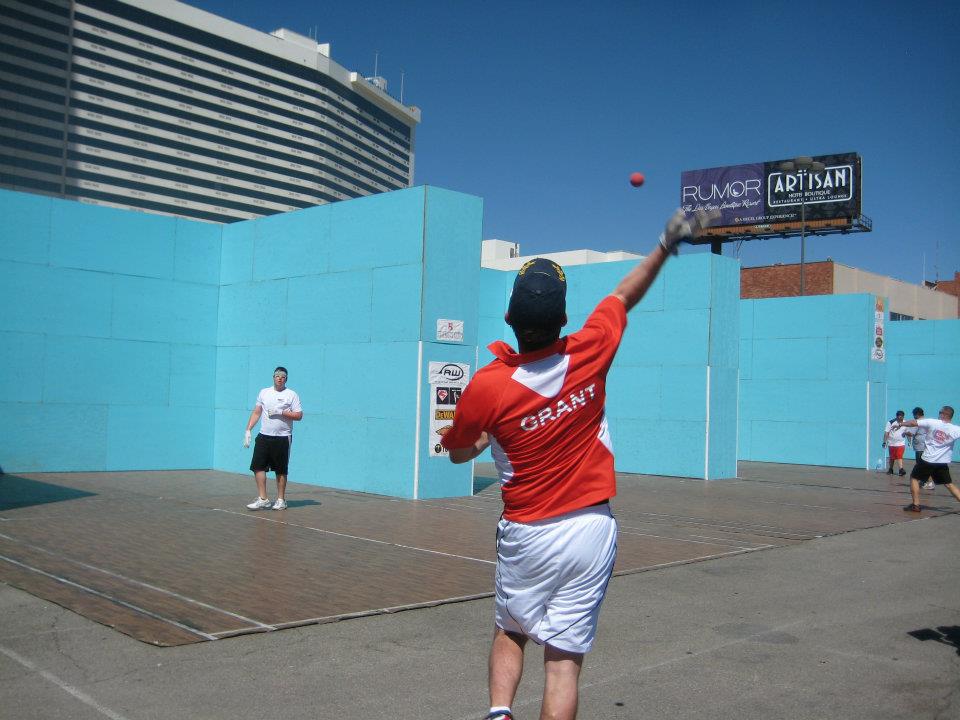 Every summer I travel to the States to gain invaluable 1-wall handball experience with the best players in the world in New York. However, this year I thought I’d mix it up. A couple of the Mexicans I met last year insisted I head West and play the WPH 3-Wall World Championship in Las Vegas; a tournament they referred to as the ‘wildest, craziest tourney of the year!’. How could I refuse an offer like that?

Of course, there were a few problems. The first being I’ve never played 3-wall handball before! The second being I had just started walking again on a mended broken foot and it was agony.  The latter had a simple solution though – American drugs, you see, are brilliant!  The former however, posed a greater obstacle.

I stayed with my old fives partner Freddie Sjostrom, now an actor in LA (‘A Cinderella Story: Once Upon a Song’ now available in all good stores…) and headed down to Venice Beach every other day to learn the 3-wall game.  And let me tell you, the sunny beach with the glistening ocean and fresh salty breeze knocks the squalid dank squash court I’m used to for six any day!

3-wall is an interesting code of handball. You play with either the big ball (like we do in 1-wall) or the smaller, harder 4-wall ball (something I’ve hardly ever played with before).  The courts are outdoors, about the same width as a squash court and slightly longer.  The side walls extend only half way.  Even though I’ve been told it’s a hard game to play, I felt at ease almost immediately.  Fives has taught me to read angles well and before I knew it I had the best players on Venice Beach keen to challenge me.  As in 1-wall I learnt that fives shots are remarkably effective – the rest of the world just hasn’t seen our side-on ‘tennis racket swing’ that we take for granted. 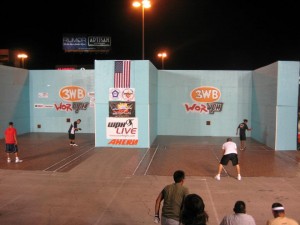 The courts in Vegas – functional Day and Night. What a sight!

With my confidence boosted I headed for Vegas where I’d be playing in the Small Ball C Grade and the Big Ball Pro Grade.  I figured I’d be knocked out of both incredibly quickly, but it’d be worth it for the experience.  My first match was, embarrassingly televised. I was playing against a guy who got to the semis last year.

My first lesson in Vegas was that when playing outdoors in 50 degrees you should never, NEVER, give anything 100%!! I was shattered and virtually dead after 4 minutes.  I took all my time-outs and drank a whole 2 litres of water before losing by a sum that shall not be repeated here, however I’d learnt how to play on these slow courts and that knowledge would prove invaluable as I dropped down into the plate.

The piercing blue courts were located outside the Stratosphere Hotel, down the more seedy end of the Strip. They were a marvel to behold and it was great to meet so many handballers and raquetballers (the 3-wall tournament was a joint one) all coming together for a mutual love of their favourite games.  Being the only European there I was taken under the boisterous and friendly wings of Team Puerto Rico – a bond which will see us through for years to come.

Mercifully, most of my other matches were at 1 in the morning when the temperature is only 30ish degrees – far more comfortable! I found I began to start playing well – really adapting to the 3-wall game. I won a couple of games in the Pro Plate before bowing out to Speedy Gonzales in the last 16.  Surprisingly for everyone, not least myself, I was actually winning the small-ball grade I’d entered. Even though I’d never played with this kind of small ball before, I actually found it easier to adapt to than the big ball (thanks again to fives) and although my semi-final was more of a walkover as, after a three hour flash-rain delay pushing play to the very early hours my opponent had sadly succumbed to the evening temptations of Vegas, the final was one I’ll never forget.

It was midday on the last day of play (hot, very hot) and I was playing against a guy who’d been playing for the last 6 years.  He got off to a good start and took the first set. Luckily for me, however, he only had his reserved father cheering for him, and I had team PR – a group of people who put Richard Price and Guy Matthews to shame! Remembering where I went wrong in my first game, I toned down my aggression and started to play more smartly. I took the second set in a nail-biter.  I managed a good start in the 3rd and very soon I had an unassailable lead.  I had won a 3-wall World Title!  Albeit it was only the C Grade, but I was thrilled nonetheless.  I was also delighted to receive my trophy – a Stella Artois Pint Glass – apparently well revered in the USA!  And I suppose that sums up Vegas well: presumed wealth, inherent tackiness, good times! 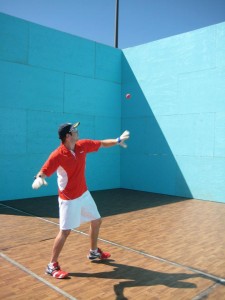 On my way to winning the 3-wall C small ball singles (say that in one breath!)