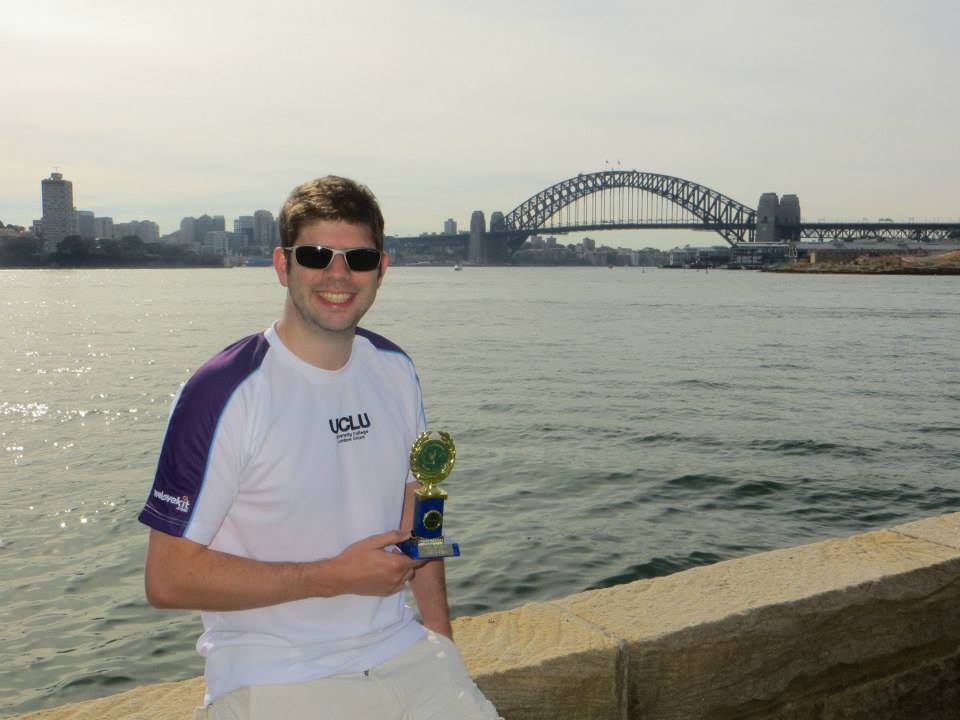 The best of Australian wallball was played in Sydney over Easter weekend, when the Australian 3-Wall Championships were held at the Heffron Park Courts.  It was another successful carnival. Friends met. There were battles. Actually there were great battles. There were rivalries, disappointments, victories and excellence. There were balls cracking from early in the morning until late into the sunset. There was wonderful catering and barracking and beers all night long. And it was a family carnival. There were kids and wives, brothers and sisters, every day. The New South Wales community came in big numbers and opened their courts with huge hospitality. 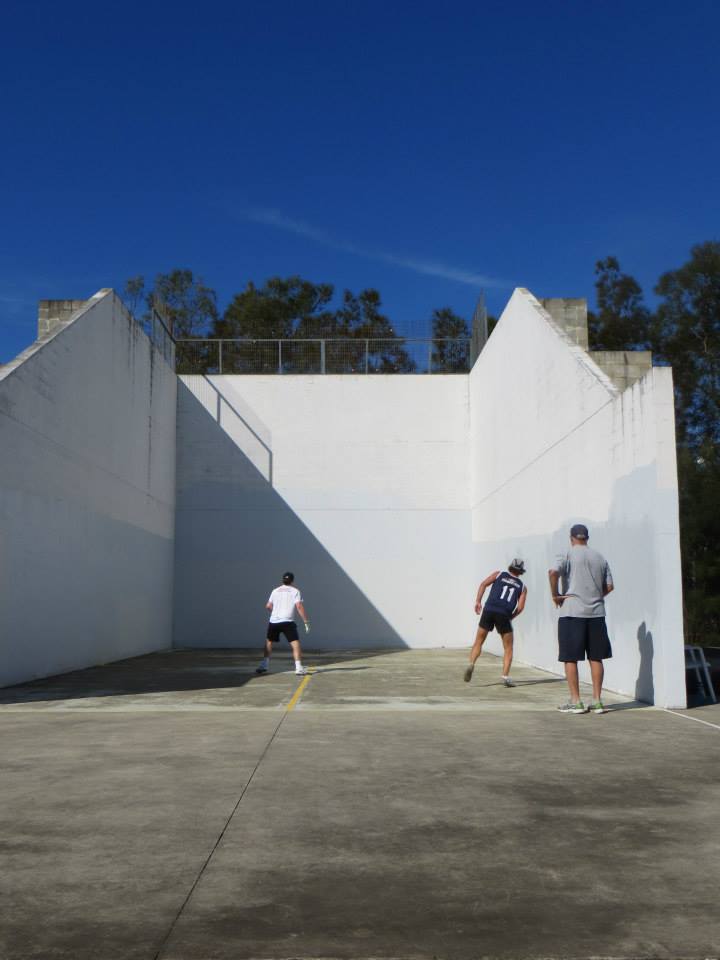 This year there were strange accents. The carnival became the most international in the history of Australian tournaments. Whilst Will and Kate were charming most of Australia from the Sydney Opera House, Daniel Grant was down the road doing his best, accompanied by his lovely sister. Dan has a disarming quick wit and unflustered determination on the court, proved by his status in Europe. Beware a relaxed opposition. It is why we love to play the Poms and he helped cement the Ashes rivalry with his victories. He was joined by the ever-polite, nimble and master of short shorts, Tommy Curtin, who had a personal cheerleader in the form of his beautiful wife Jules. There was also Lorraine and Richie from Ireland – Lorraine, the first female to enter our masculine arena. And of course there was the best in the world – Tyree Bastidas, haling from the New York Athletic Club. he left as the premier player of the tournament and also claimed the deep admiration of us all.

With over 40 players competing in the warm Sydney sunshine there were many events to get through. 3-Wall in Australia is played on a giant court. There’s singles grades, doubles grades and even the special O’Connor Cup – a rivalry between regions played for decades.

In the Open singles, played with a softer than usual small ball, Grant was thrown in the deep end. Not only had he never played with that ball before, but he’d never played on a court this big. His first match was therefore against the reigning champion and no.1 seed, Dylan King. Thrown in the deep end underplays it! The King brothers a legendary in Australia and their dad is a champion of the highest order. Dan decided to have fun.

Dylan got off to a poor start and Dan began to learn the game quickly. He (and Tyree) play the game completely differently from the Aussies. Instead of running a long way back and hitting for height and power (in the open grade there are no back-court restrictions!) he stepped in for volleys and kills – taking a 1-wall game to the a 3-wall arena. And it worked. Dan took the lead in the first game and actually managed to win it. Buzzing on a high and taking full advantage of King’s frustration, he then ended up closing out the game. Grant won, beating the number 1 seed and progressing in the Open. Fantastic result. 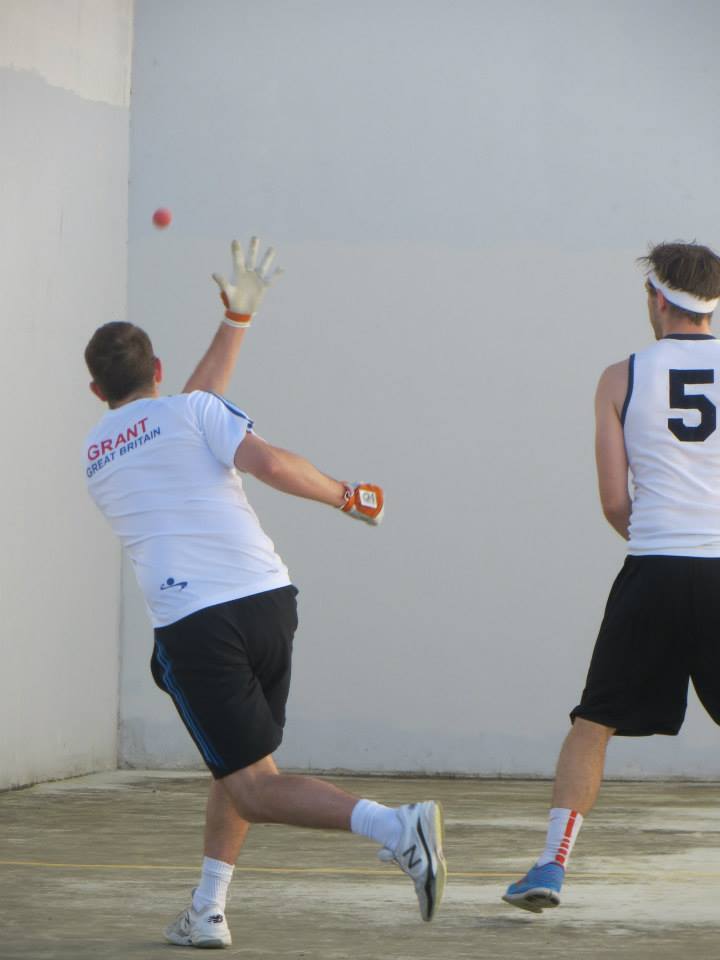 Grant in action in the singles

On the Saturday he played his semi-final against Sean King – Dylan’s brother. This was a real cracker. Sean came out hard and threw Dan heavily onto the back foot. He lost the first game badly, but rallied in game 2. From 9-4 down, he turned it around with swift footed kills and won the second game 15-9. Tie-break time! This was a real ding-dong affair and after a schedule breaking amount of time-outs in the hot weather, King came through to earn his place in the final.

Here Tyree, who was on mean form all weekend, dispatched Sean with ease. Tyree became the Open champion.

A few hours later the A-grade kicked off. This grade is played with the big ball, which we’re used to in the UK. Grant was also playing in this as the game-styles are completely different. He was joined by Tommy. Tommy hasn’t played wallball since moving to Australia several years ago, but now he’s found it he’s keen to keep it up. He’s clearly got the reactions and prowess of a sporty fives player and despite doing an Iron Man just a week before, he was as nimble as ever around the court. He played his best and showed the Aussies what true magnanimity in defeat involves. He lost in round 1 to Lorraine Havern. But she’s the 2nd best female player in the world, so no shame in that! 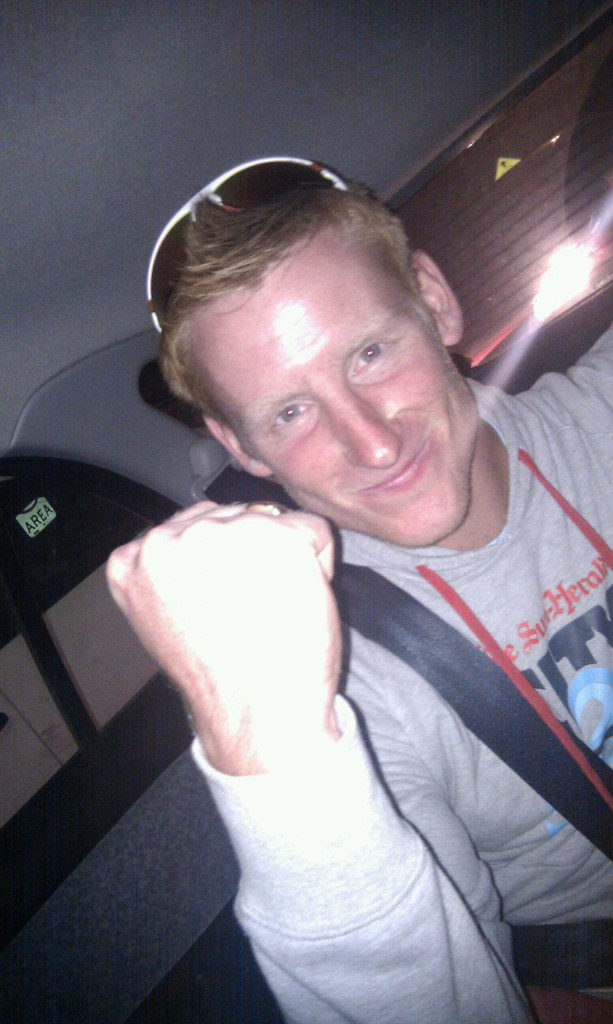 Tommy Curtin – champion in the making!

Double sadly he lost in the doubles too, again to Lorraine – joined by her boyfriend Richie. Tommy played really well in this game and his partner, D. Lynch, couldn’t quite get the timing right. The duo lost, but they lost in style!

It was in the A grade that Grant really began to find his niche. He dominated this grade and wiped away all the opponents to less than five points. He ended up winning the grade comfortably and walking away with his first Australian title.

In the doubles he teamed up with Gio Raimondo, a newly turned 15 year old with tenacity and bags of potential. Doubles in 3-Wall is tremendous fun and demands a good reading of the game. Most players take a front/back approach and the international pair were no different. Gio, who knows the game better and has mastered the Australian fist, took the shots from the back. Grant owned the front and stepped in for volleys and 1-wall kills. The tactic works well and the duo progressed in a couple of tight matches to the semi-final.

Here they faced Bob Winter and George Raimondo, Gio’s dad! There was pride at stake here and it showed. This was the game of the tournament (from a British perspective!). The established older pair took the lead and maintained it through the match until 17-14. But then the younger duo staged a comeback and took a slight lead. The crowd began to get restless with excitement as the game came to a nail-biting 19-19. George and Bob had their chance to win but some superb width kept them at bay. Then it was down to Gio and Grant to close it out and they did, earning their place in the final. 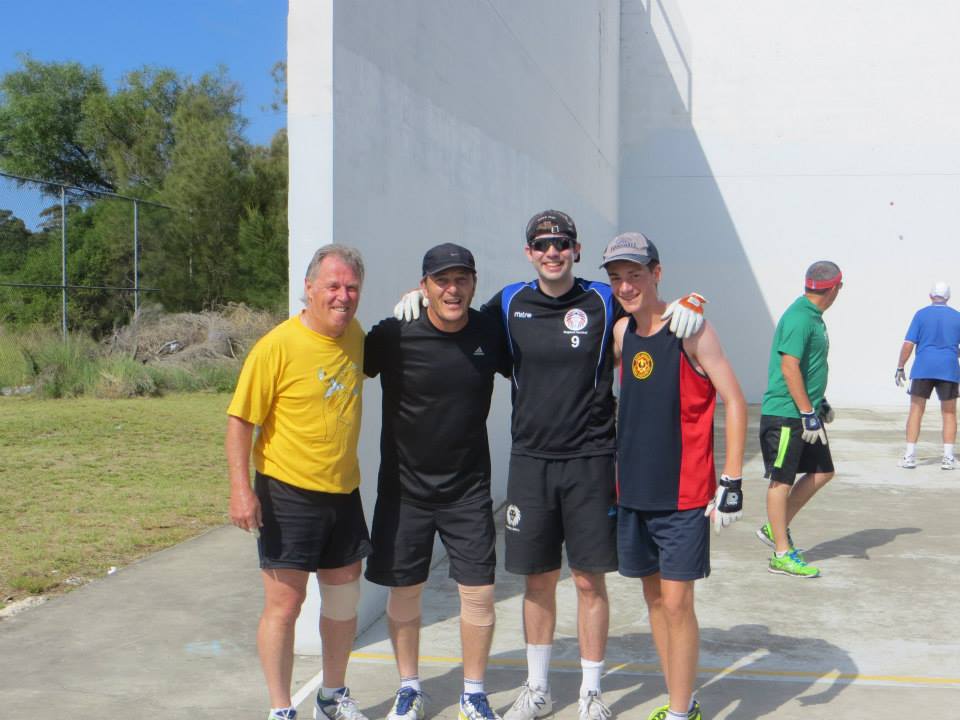 Bob and George with Gio and Dan. What a game!

The final event was the O’Connor Cup – a rivalry between the 3 main wallball regions in Australia: New South Wales, Victoria and South Australia. Grant and Bastidas were given the opportunity to take part and it was a tremendous privilege to play in such a historic event.  In the end it was Victoria who won in a quite remarkable display of doubles.

The crowd gathered for a drink and closing dinner on the Sunday night. Everybody had a chance to say thank you to the NSW Handball Association. There were many helpers that were involved who were part of making the Championships such a big success. We celebrated the international life of wallball and rhythm and grace of the 3-wall beautiful game. We celebrated fitness and athleticism and a chance to enjoy a tough competitive encounter. We celebrated traditions and the spirit of past players but also the potential of the next generation. We celebrated that the handshakes are firm in wallball and sportsmanship is important.

A wonderful tournament, tremendous hospitality and a fantastic insight into an age-old Australian tradition. Until next time!