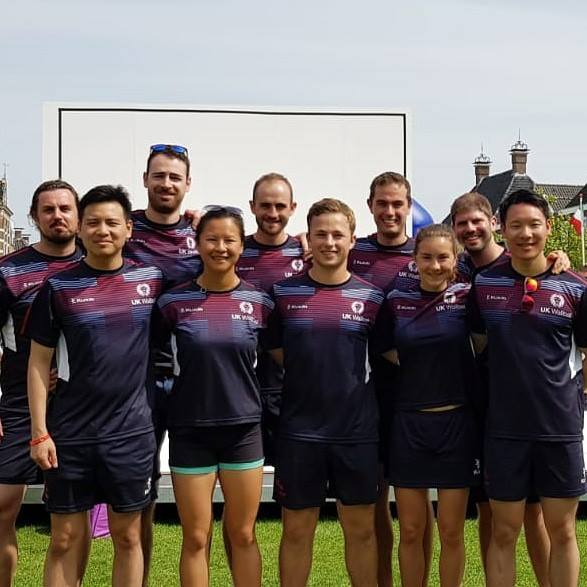 As the dust settles on another fantastic European Championships, Team GB can reflect on another successful campaign and maintain their status as one of the superpowers of this sport. Two bronze medals made their way cross-channel on Sunday evening at the finish of the CIJB (Confederation Internationale de Jeu de Balle) championships. Franeker, in The Netherlands, hosted a wonderful tournament which included thronged streets and packed stands, witnessing superb displays from all teams.

The International game was first up and Team GB ladies performed strongly with Shinan Zhang and Louise Mathias taking home the country’s first medal in the ladies game. The performance of the day arrived in a 6-1 victory over Italy in the third place play off. Zhang, taking up a back-court position used her impressive power to drive consistently into Italian territory. Mathias played a very aggressive front court position and finished many rallies with clever blocks.

The men didn’t have much luck and despite strong service games from Ian Chai and Luke Stradwick, they went down to strong Basque and Belgian sides. Penn Chai also performed heroically, putting his body on the line on several occasions to block opposition drives.

On the second day, the main event, the wallball championships took place at Franeker square. Dan Grant and Luke Thomson stepped up to take bronze, following entertaining victories over the Dutch and Basque pairings.

Llargues, an unfamiliar category for the British, was last up. Unfortunately the draw was unkind and the team were up against it, facing the Netherlands and Spain. A fantastic experience for the talented British team, but they eventually suffered losses. However, there were gallant displays. Veteran Gareth Price, rolled back the years, with some impressive serving in the first game, taking the man of the match gong. Best for the British, against Spain, was Ollie Arnold who, using his superior reach, returned everything in a strong defensive display

A great time was had by all and congratulations must go the welcoming hosts and CIJB for organising a meticulous event. All eyes turn to the upcoming European wallball tour, kicking off the new season, in Valencia in late September. The next CIJB event will be the World Championships – Belgium 2020.