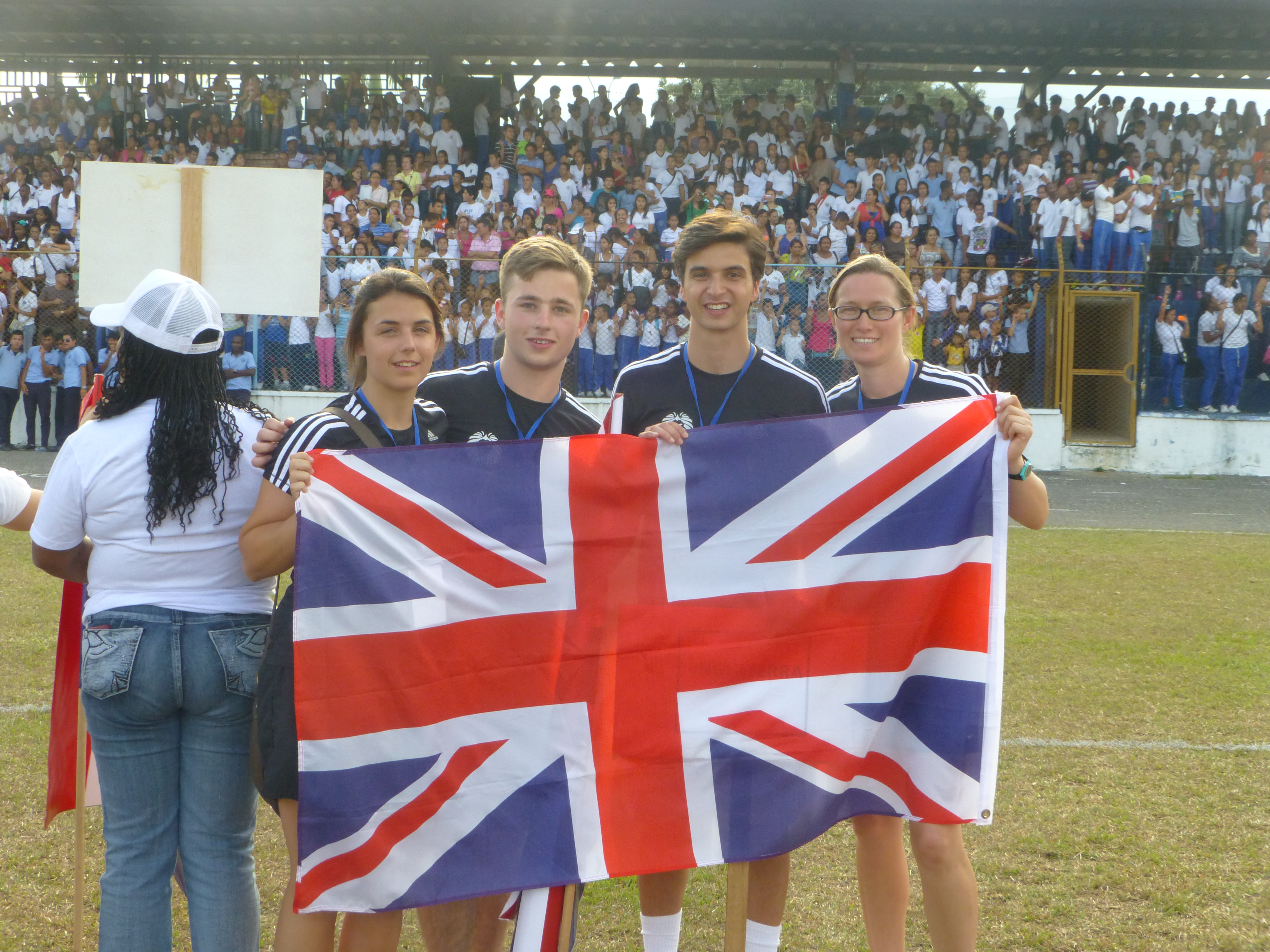 [tab]Men
– 4th in group stage
– 7th overall
– Notable results = to the wire vs. Ireland, Mexico and Argentina. Read the report below for details.

At midday on Tuesday 23rd July, the enthusiastic duo of Dan Tristao and Luke Thomson met at Heathrow Airport to go to Colombia. The girls – Kathleen Briedenhann and Tessa Mills – had already set off. Little did they know the hell they would all put themselves through over the coming week. 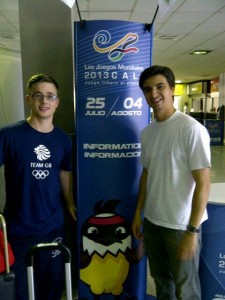 For readers who don’t know, the World Games is a global sports event, and is essentially the “Olympics for non-Olympic sports” – the 2nd biggest sporting event in the world. There were 120 countries represented and 31 sports contested, including squash, rugby sevens, waterskiing and tug of war. Events are divided into the main showcase sports and “invitational” sports. Wallball was part of the games for the first time as a demonstration event with a view to being considered for formal inclusion in the next games and then a push into the Olympics after that.

As a demonstration event the Wallball was being held in the small but lovely town of Jamundí, a short drive from Cali. We were taken directly to the courts, or the “Coliseum” as it was called, where the walls were still being painted ahead of play starting the following morning. Perhaps a little late in the day, but by the time the tournament kicked off, everything was looking as professional as ever. 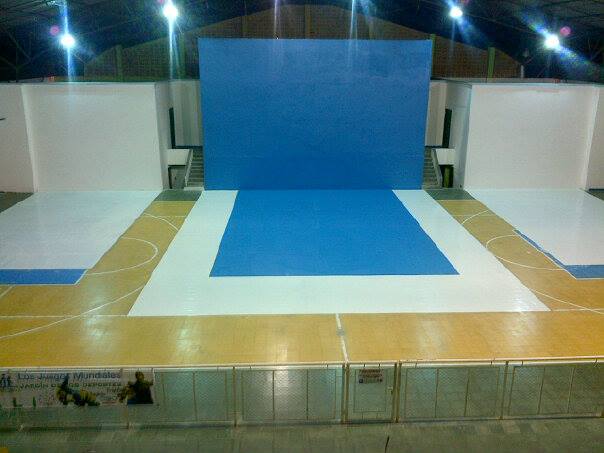 The Wallball kicked off on the morning of the 25th July. The format of the men’s event was 2 groups, each with 5 teams, with the top 2 from each group going through to the semi-finals. Doubles only, with matches to be 2 games to 15, with a deciding tiebreak to 11. In Great Britain’s group, Thomson and Tristao came up against the USA, Mexico, Ireland, and France. The other group featured Puerto Rico, Colombia, Basque Country, Argentina, and Ecuador. The matches took place in front of a packed crowd thanks largely to an influx of local schoolchildren whose presence made for a great atmosphere. Kudos on a superb job by the organisers in gathering local interest and support for the event. In their first match against Mexico, GB got off to a flying start, storming to a convincing first game win. However, the Mexicans rallied and with some somewhat unsporting crowding of the referee and disrupting of the game, eventually won 11-9 in a nail-biting tiebreaker. Fortunately this wasn’t to be a theme of the competition, and matches were largely played in great spirits.

Next up, the Irish. This proved to be another cracker, again going to a deciding 3rd game. This time, Team GB went 10-3 down. Then, after a patch of strong serving, and several match points saved, they were serving at 10-all! Their first match point. An incredible rally followed, until Tristao finally got a mid-court ball which he took on the volley, aiming it towards Thomson, who had been blocking very effectively over the course of the match. The ball was heading towards his right hip, but was too close to him by a matter of millimetres! He had to move, forcing a replay. Following a miscued serve, the Irish had their 5th match point, which they took. An 11-10 loss to a highly-rated Irish pair. The Brits were performing well, but still looking for their first win, having come agonisingly close in both matches.

Emotions were riding high after the first day’s play, and they were certainly not lowered by the evening’s events. That evening the Jamundí opening ceremony took place. This proved to be a marvellous spectacle, and not one the team would forget any time soon. This took place in front of a packed stadium crowd, with appearances from the town Mayor, and interviews for local television. There was also a brilliant show put on featuring an amazing display of salsa dancing; certainly something the team needs to work on before ever returning to Colombia. That and Spanish. 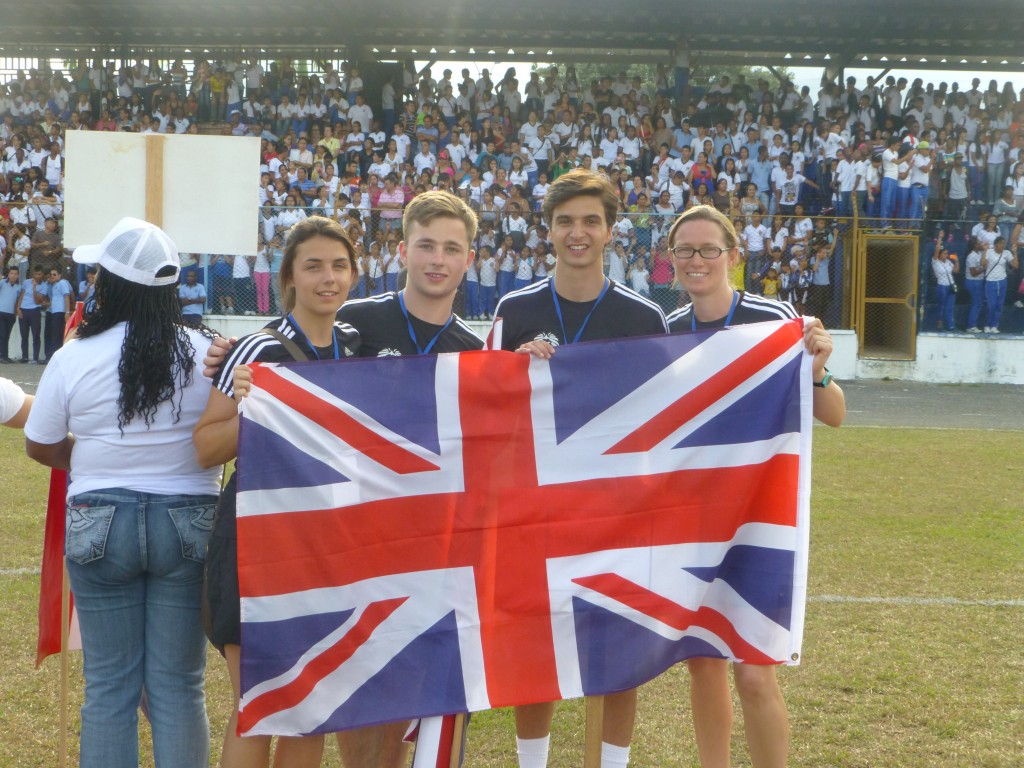 Team GB at the Opening Ceremony

However, it was the end of the ceremony that was the most surreal. The crowd was allowed onto the pitch, and essentially mobbed the athletes. What followed was about an hour of constant photos and autographs. This became a theme of the week as athletes had the pleasure of dealing with adoring fans in between matches at the Coliseum! But nobody could have predicted the frenzy that would surround our very own Luke “Tekkers” Thomson. As it turns out, the pre-teen girls went pretty crazy for his boyish charm and beautiful blue eyes. The result? Many of the players were delayed at the courts for about 30 minutes while the organisers decided how to deal with the crowd of girls that had blocked the door chanting his name…

In the end, the solution was a police escort out of the back exit. So, this was Luke’s first taste of what it’s like to be Wallball’s Justin Bieber. Presumably he has been treated the same way since his return to the UK.

Come the second day it was back to business for the wallballers. The girls were kicking off their campaign. The format of the women’s competition was 1 group of 4 teams, playing a round robin to decide the draw for the semi-finals. They were up against Puerto Rico, Colombia and Ireland. In their first match, the girls battled hard against a very strong Irish pair before losing in 2 tough games. Their second match was against the favourites and World Champions Puerto Rico. In this match the girls played brilliantly, leading 10-5 in one of the games before bowing out in 2. Their last group match was against the local favourites Colombia, a pair carried by Jojo Parra (one of the top players based in New York). Team GB lost this match narrowly in 2 games, coming fourth in the group.

Back to the men’s event and Team GB faced the USA, a team comprising 2 of the top 4 players in the world. Clearly there was not a lot between the two pairs. The quality of play was through the roof, but a few lucky shots here and there meant the Americans came through in a 15-4, 15-3 epic that had the crowd on the edge of their seats. Seriously though, this was a lesson in Wallball that showed that despite the progress made by British wallballers in the brief period the UK has been involved in the sport, there is still some way to go to match our counterparts across the pond. A real privilege to be learning from the World’s best.

Next came the French. These players were not traditional wallballers, with Frontball being their sport of choice. However, they proved to be an awkward pair, playing with a lot of power from quite deep in the court. After a sluggish start, going 11-4 down, Thomson and Tristao adapted to their unconventional style and came through 15-11, 15-6. This victory meant they qualified for the 5th place play-off. First up there was a similarly awkward, but more experienced Argentinian pair. After losing the first game, the British pair really dug deep and played intelligently, using lobs to great effect – pushing their opponents deep and taking up a dominant position in the court. After a long battle, Team GB won 11-7 in a tense tie-break.

On the third and final day of the Wallball competition, the guys kicked off against a very strong Basque side. The Brits performed well but struggled to convert on serve and fell 15-4, 15-4. The Basques ultimately came 5th, and Team GB finished a respectable 7th place.

Meanwhile, the girls prepared to play Ireland in the 3rd place play-off in front of a packed crowd. This was certainly their best performance of the tournament, showing that they had grown in confidence and had adapted to the courts. After 2 hard-fought games, they came away with 4th place, but picked up a lot of great experience against some of the best players in the world. 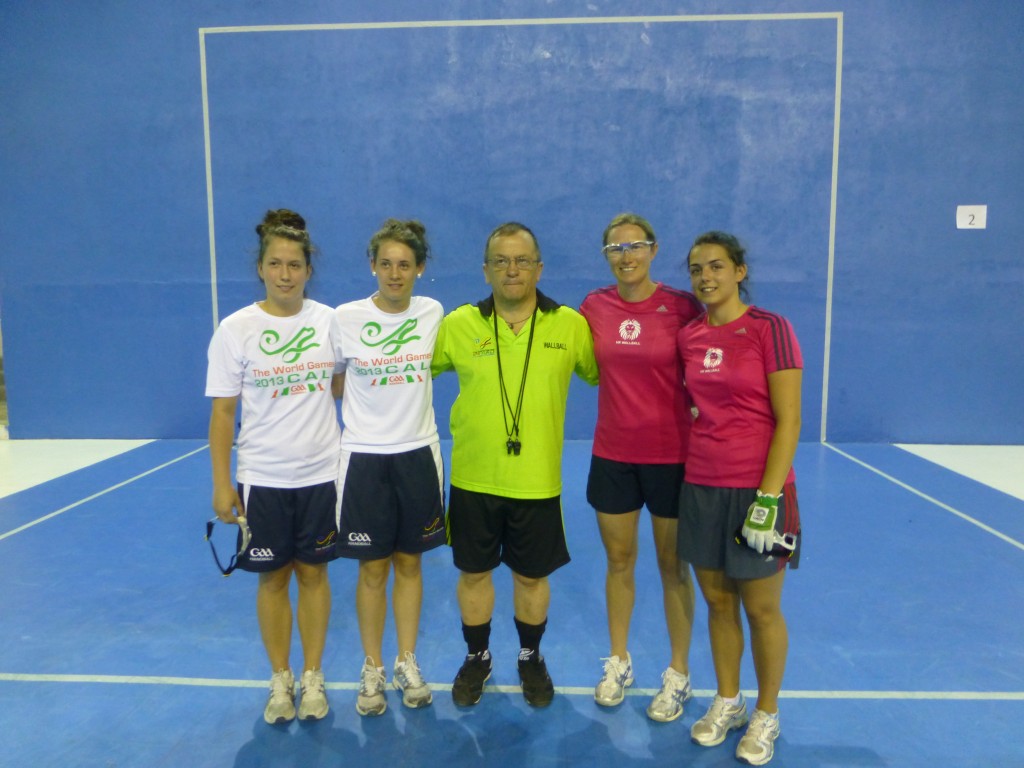 Tessa and Kathleen with the Irish team.

In the women’s, the final results were… 1st place: Puerto Rico, 2nd: Colombia, 3rd: Ireland. The final was very tense, and eventually won in a tie-breaker by a deserving Puerto Rico team.

In the men’s, the final results were… 1st place: USA, 2nd: Puerto Rico, 3rd: Colombia. The final (Timbo Gonzalez & Tywan Cook of the USA vs Wally Amaro & Baseball Chris of Puerto Rico) was absolutely spectacular. A cracking 3-gamer that was truly a privilege to watch, and a fitting end to a fantastic tournament.

The last couple of days consisted of the Frontball event. Nobody in the UK had previously heard of this, but the team was keen to give it a go. Essentially the sport is played on a Wallball court that is slightly wider, longer and taller, and there is a bar that players must hit above during the rally. The ball is a heavy leather ball that plays similarly to a fives ball in terms of spin off the glove and wall. Those more seasoned seemed able to play bare-handed by hitting the ball with their fists but the Brits didn’t want to risk trying this at the first attempt. Fives gloves it was then. And so it began… nobody could have imagined the drama about to unfold in the men’s event. To keep the suspense, we’ll kick off by reporting the women’s…

Only Kathleen entered from the Team GB girls, and made a seriously good account of herself. After a brilliant win in the first round against Sophia Murphy of Puerto Rico, an established Wallball player, Kathleen took on the reigning Frontball World Champion, Maritxu Housset of France. Having never played the game before, Kathleen did not look out of place against the Frenchwoman, eventually losing after some gruelling rallies. Maritxu went on to win the event.

In the men’s, the pick of the draw was the first round match between… wait for it… Thomson and Tristao! The pundits couldn’t believe that these two heavyweights would face off in the very first round, and the crowd could scarcely contain their excitement. The match was neck and neck throughout, with no player having more than a 2 point advantage at any stage. Thomson’s skilled attack was being matched by Tristao’s nimble defence and subtle touch. Suddenly, Tristao found himself 14-13 up (the format was a single game to 15), match point. Mid-rally, he threw everything into a cross-court right hand kill, only to see it go miles wide. 14-14, sudden death. Thomson couldn’t hold his nerve, and spooned his own right hand wide of the court. Tristao took the victory.

Dan went on to claim three further victories against an Irishman and 2 Puerto Ricans, before finding himself inexplicably in the quarter-finals, where he would face Nico Comas of Argentina. The quarter-finals were a spectacle in themselves, with large crowds and entrance music for the players, which was a novel experience for those more used to the more modest setup at Fives tournaments. This match proved to be the pick of the quarters; again it was nip and tuck, until Tristao found himself once again at 14-14! This time an error cost him the match, ending his Frontball campaign. But this was certainly a result he could feel proud of. The tournament was eventually won by Mexico in a great final against France. The Frontball event was really quite a show, impeccably organised, and is a sport that we hope to showcase at the upcoming UK Open in February.

So that concludes this report. The last thing that we can do is offer an enormous thank you and congratulations to all the organisers for putting together an unforgettable event that we certainly won’t forget. In particular, thanks to Willie Polanco and Vlad Klym in the Wallball, and Jean Michel Idiart and his team in the Frontball. Dan, Luke, Kathleen, Tessa, and UK Wallball are forever grateful for your efforts.

Finally, massive thanks to the people of Jamundí for the wonderful hospitality and for making it such a special trip for us. We hope to be back soon! 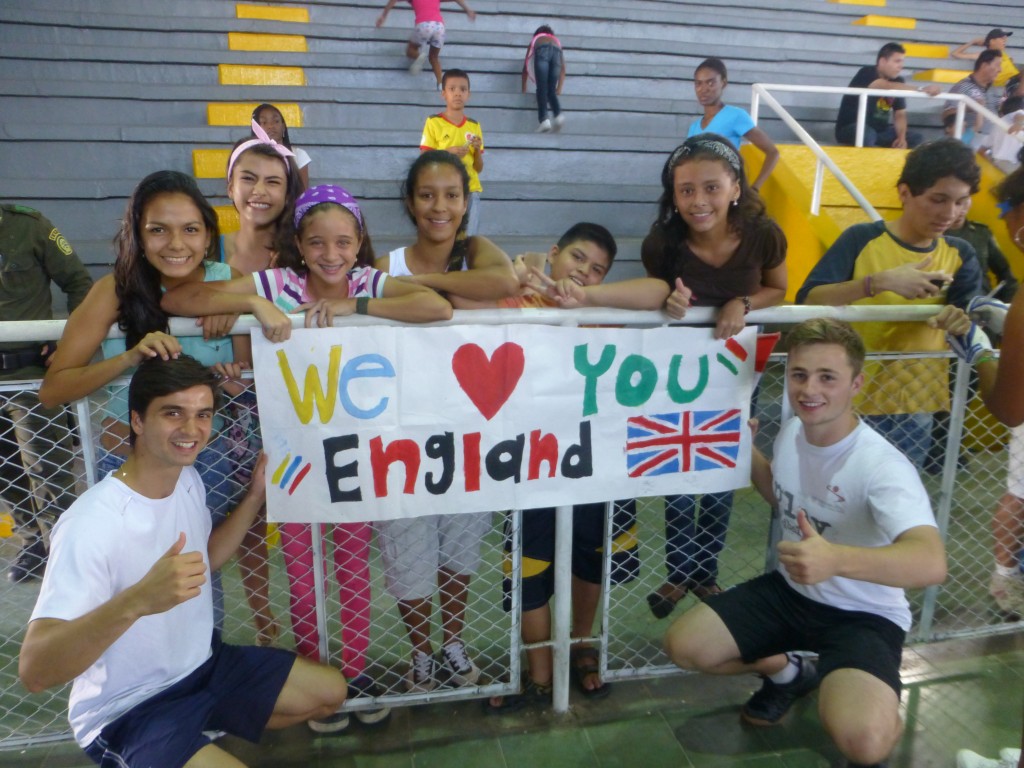