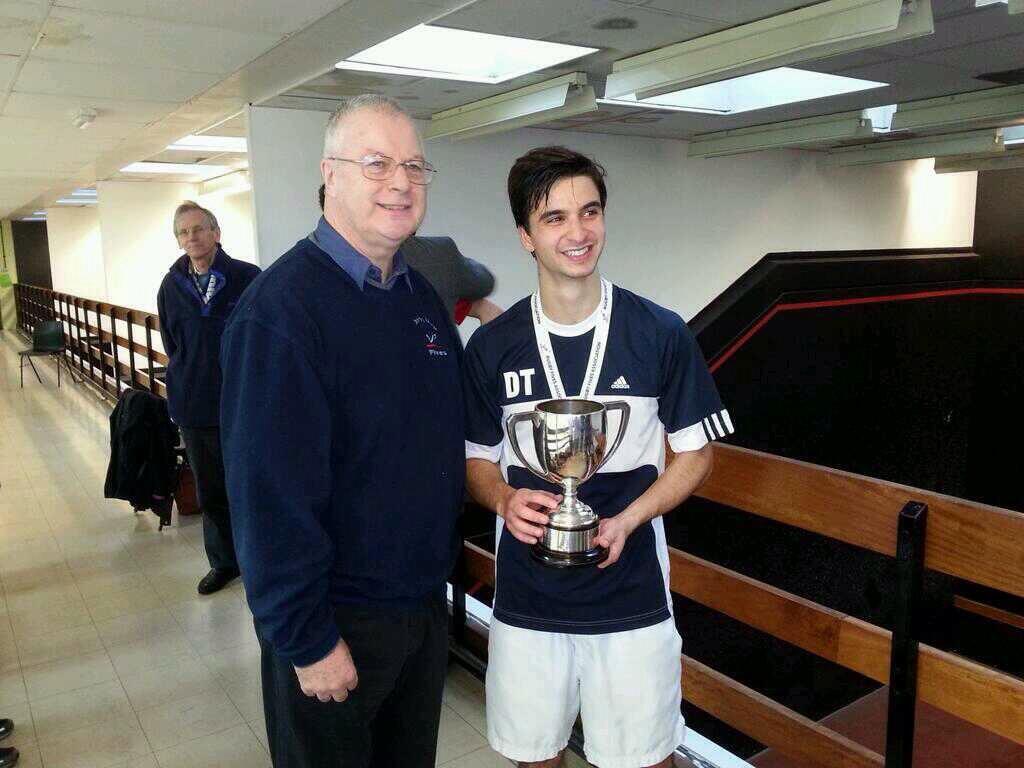 Dan Tristao won his first National Singles title today, with a win over Will Ellison in the final, making Dan the first Old Pauline national singles champion since John East in 1969. It was a fitting culmination to a wonderful couple of days’ play, which were notable for many reasons: the number of young players reaching this stage of the tournament bodes well for the future of the game, while this was the first time for six years that James Toop did not reach the final. Mind you, he came agonisingly close, only being knocked out by Will Ellison, who had lost to James in the last three finals, but came back from 5-11 down and saved some six match points before taking the third and deciding game of their semi-final this year 16-14.

The long battle took some of the energy out of Will’s legs, but it was an irresistible start to the final by Dan; with a combination of deft hands, reverse angles and punishing line and length, he pushed his opponent all over the court to take an early 8-0 lead. Will managed to slow down the charge by capitalising on the few errors that Dan was making, but the deficit was too great and Dan took the game 15-4. At the start of the second it looked as though the match might turn into a classic, with the scores locked at 7-7 after some coruscating rallies, but Dan raised the bar again and marched on to a 15-7 victory and with it the Jesters Cup.

Once again, it was the semi-final between the second and third seeds that was the most exciting encounter of the tournament, and for the third time in a row it was Will who came through by a whisker in the final game. However, this year his opponent was James rather than Dan, who had a slightly easier route thanks to his number one seeding. Will got off to a storming start again James, racing to game ball for the loss of only two points before James fought back. Although he lost that opener, it gave James momentum going into the second which he took relatively comfortably. Both players then showed the fighting qualities that have served them so well over the last few seasons, with the decider going this way and that; the closer the winning line got, the harder it was for either player to score points, culminating in six match points saved by Will before he eventually managed to eke out the final point well over two hours after the match started.

The first two rounds had gone more-or-less according to the seedings – the exception in the first round was Tom Maconie (9) edging out Ed Kay (8), and in the quarter-finals Dan Grant (5) beat Matt Cavanagh (4). The latter result looked unlikely after Matt won the first to 5, but Dan managed to change tactics effectively to reach his first National Singles semi-final.

As ever with the National Singles, the plate competition was of a very high standard with some cracking matches taking place. It was won by Ed Kay, beating Matt Shaw in the final, who had scored notable wins in both the qualifying tournament and the plate. The plate was remarkable for the fact that every player is currently a student!

Finally, many thanks to those who organised the regional qualifying tournaments in Durham, Bristol and Cambridge – in doing so they helped to attract the largest entry to the tournament ever.