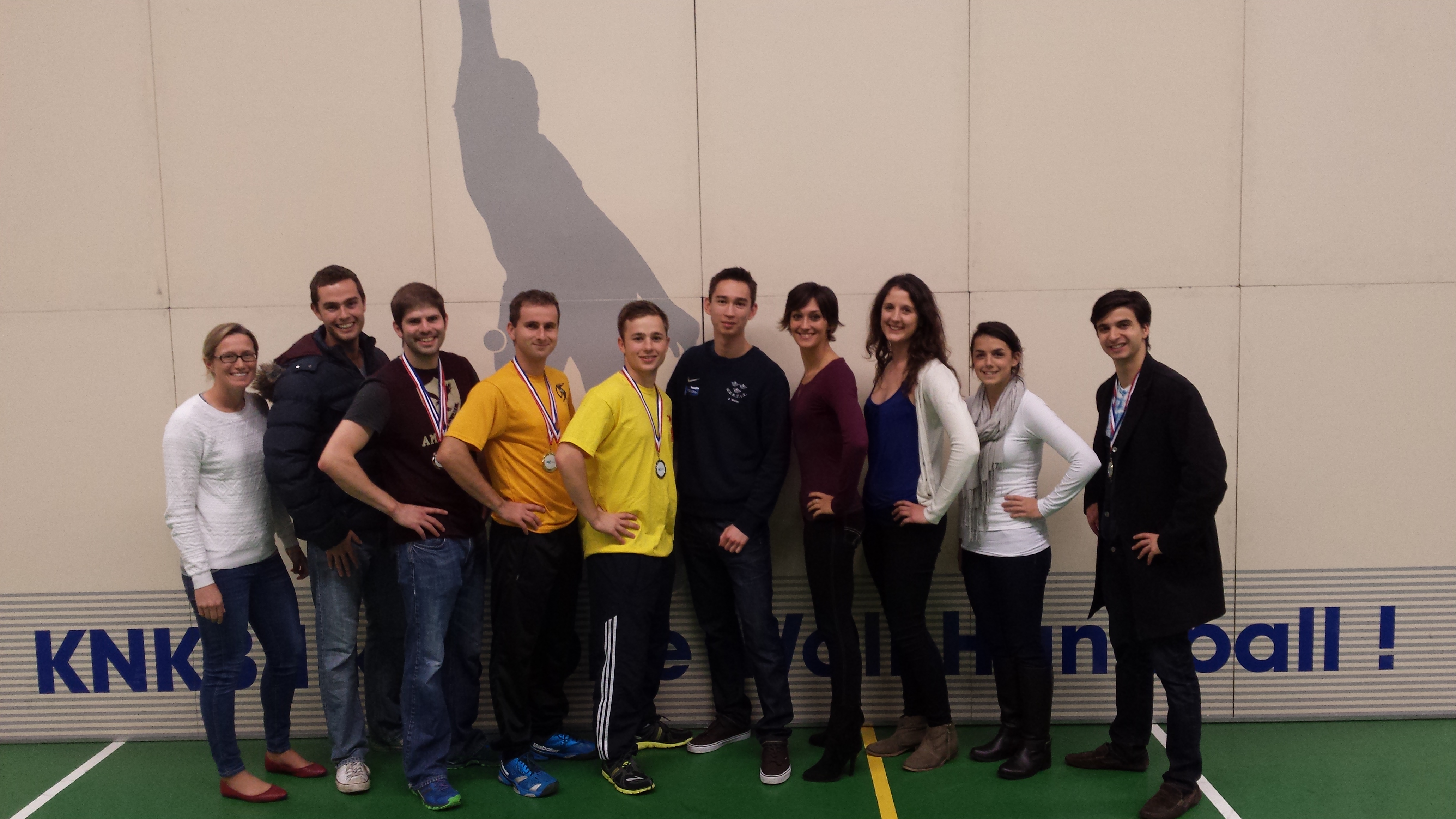 On the 8-9th November a sprightly group 11 UK Wallballers headed to the picturesque town of Franeker for the Dutch Open. Following on from Thomson’s triumph at last weekend’s Belgian Open the group felt inspired and when the matches started they really delivered, making this the most successful Open from British players to date.

Details below, but in a nutshell the top male players hit their targets and walked away with a second doubles title in as many weeks. The women cleared up the plate and our newest player, Chris Waller, won his first ever wallball match. We hope it’s the first of many!!

Full report below, but first a quick first hand account of the tournament from Chris himself:

Having always been a Rugby Fives player, I finally decided to give Wallball a go after being enticed by the prospect of playing for Great Britain in Holland. What stood out most for me was how close-knit the sport is and the festival atmosphere surrounding the tournament. With 150 players descending on the small town of Franeker, this was instantly noticeable on Saturday when I entered the sports hall to find music pumping out and men and women players of all ages from across Europe and the US.

Saturday was the singles tournament and having only played Wallball once and without any singles experience I was hoping that my Rugby Fives skills would be quickly transferred across. Luckily this was enough for my first game which I managed to win. Having assumed the title of One-Waller, I was able to eventually progress to the last 16. Yet the day was far from over after the last match had been played.

With most of the players staying in the same hotel, the organisers put on a night which featured a dinner, speeches, drinks and (unofficially) a trip to the local pub. All in all it was an eventful evening to say the least. Waking up on Sunday proved to be difficult, but I had a good doubles tournament, losing to the eventual winners in our group but winning our other matches before narrowly succumbing to the other finalists in our second knock-out match.

Overall, it was a successful and enjoyable tournament for the whole of Team GB and I’d certainly encourage people to give the game a try. Thanks to everyone who helped organise it and bring on the UK Open![/box]

As is tradition now the majority of the singles was on the Saturday and the doubles on the Sunday. Four UK Wallball players competed in the Open this year – Daniel Grant, Luke Thomson, Daniel Tristao and Luke Stradwick.

Stradders pulled the short straw and entered the group of death with last week’s Belgian Open winner, John Melo (USA) and junior superstar Metayer (FRA). Needless to say he walked away from both matches with a 30-3 aggregate, which saw him collapse into the plate where the only way was up!

Thomson & Tristao had the unenviable task of playing each other in the fist match! Thomson’s seeding held strong here and despite a nervous start he gained the confidence which was imbued in him over a summer in New York and closed out 15-10. Thomson went on to top the group and Tristao came second. Both therefore progressed to the Last 16 knock-out.

Grant, quite uncharacteristically managed to progress through his group without any narrow score lines or drama whatsoever. Most peculiar. He joined the other two in the last 16.

Then came the knock-out stages.

Luke Stradwick, battling in the plate managed a crushing victory over Van Abeele in the plate first round, before going on to lose both the semi-final, followed by the quarter-final in a bizarre clerical error.

Tristao fell in the last 16 of the Open to the second junior superstar of the tournament – Steve Sorquette (BEL). The kid with a killer spike and lots of intelligence. An overindulgence of Frikindel probably didn’t help affairs either.

Thomson came through the last 16 by beating Pozzebon (BEL). He had a shuddery start going 9-3 down, before turning it around impressively to win 15-11. This set up a quarter-final face-off against his rival, Vlad Klym. You may recall Vlad beat Thomson in the final of the UK Open last February, but Tekkers got his revenge last week in Belgium. It was all to play for this weekend.

The quarter-final was a terrific match. Luke got the stronger start and went 7-1 up, but a smart time-out from the American broke his rhythm. The score was then 9-6 and finally, with a punishing drive down the right hand side, Klym won to 10.

This left only Grant in the tournament. He had progressed into the quarters relatively easily where he would play John Melo of the USA, who had won Belgium just last week. The stocky American has powerful drives, excellent blocking and rivals even Guillaume Dumoulin for diving prowess.

Despite both players hitting lovely kills it was Melo who began to pull away after a flurry of aces by Grant. The American went 10-7 and looked to have the advantage. But Grant dug in deep and went for consistency. It was apparent that Melo was becoming more hot-headed and stopped aiming for kills. Grant weathered the storm, turned things around and won 15-10. What a result!

He then moved into the semis where he faced Sorquette, who had felled Tristao. Exploiting the young Belgian’s weaker left hand Grant was never really troubled and made it to the final by winning 21-13.

In the final he would play Klym, who had overcome home favourite, Wassenaar in the semis. Grant got off to a shaky start and managed to improve as the game went on, but on this occasion he was outplayed by Klym, who seemed to be going from strength to strength. The American hit some fantastic rollers and drove accurately and intelligently. In the end Klym won 21-12 and Grant walked away with the silver medal. This result, however, sees him overtake Dumoulin to top the European rankings once again.

Kathleen Briedenhann and Tessa Mills were flying the GBR flag in this tournament this year. Both had tough groups and despite some strong play – especially Briedenhann vs. Siegersma, neither made it through to the knock-out stage.

In the plate the Mills fell early, but Kathleen found inner strength and without too much challenge collected our first title of the weekend – the Singles Plate. Great achievement. That’s 2 Dutch Open plates in a row for Kathleen. We’ll look forward to her upgrading next year.

In the end it was Miranda Scheffer of Holland who walked away with her third singles Open title in a row and consolidated her place as the top female player in Europe.

In the men’s B division a sparkly fresh Chris Waller (#onewaller) was taking part not only in his first ever tournament, but his first even competitive game. What great spirit!! Despite losing his first group game he managed to win the second one, rather convincingly. Learning every step of the way he played incredibly well before losing in the quarter final 15-8. A future talent to be sure!

In the women’s division Alex Steel and Sarah Greasley took part as two of the strongest players in the draw. Alex dominated her group to come top and Sarah wasn’t too far behind. This led to an eventual match up of the two girls in the semi-finals. We were guaranteed a finalist.

Sarah has a 100% record against Steel in competition, so the crowd had a feeling is would go Greasley’s way. But oh, they were wrong, Steel really played excellently this weekend and took it to Sarah hammer and tong. With a solid left hand she managed a worthy victory and made it to the final, where sadly she was runner up to Lettinga of Holland.

A quick shout out to the O’Sullivans too. Fionn was supposed to compete this year, but has suffered a horrendous hurling injury and has a smashed thumb. He’ll be back in 6 months. His father, Oli, competed valiantly in the over 50s and won one of his matches, which is a new record for the man. Onwards and upwards!

We fielded 3 pairs this year (or semi-pairs). Grant & Thomson were fully GBR and were hoping to capitalise on their success from Spain only 2 months ago. In the hybrid pairings Stradwick would partner Melo of the USA and Tristao would partner the frustratingly good Klym.

Tristao & Klym and Grant & Thomson both progressed easily out of their group stage as the top pairs. Stradwick and Melo didn’t enjoy such good fortune sadly. Melo’s good ol’American motivation of shouting aggressively at his partner for errors didn’t do much to bolster Stradwick’s confidence and the pair lost all games. Stradwick withdrew from the plate (and we’re not sure we blame him) but a defiant Melo went on take on everyone 2 on 1. Amazingly he won.

Tristao and Klym progressed healthily in the main competition knock-out and despite a few scares here and there, made the final with relative ease. The same is true for Grant & Thomson, but notable mention must go to Hoekstra and Van Der Schoot for a hugely competitive and entertaining semi-final. During one rally Hoekstra and Grant traded a dozen volleys in a row to the rapturous applause of the crowd.

This meant that we were guaranteed a British Winner in the doubles this year. The final started just a few minutes after Grant had fallen to Klym in the singles, but all the players jumped on court eager to claim the title.

Grant & Thomson started horrendously. A mix of nerves, poor shots and clinical rally termination of Klym. They went 10-1 down. It looked like a foregone conclusion and at 16-7 you would have put money on Klym/Tristao. But after a tactical time-out Grant/Thomson upped their game, cut out the errors and began to play proper wallball. The pair pulled out all the stops and managed to draw it level before taking a 19-17 lead!

But Klym/Tristao wouldn’t let the title slip away that easily. They capitalised on a couple of close errors from Grant and then, at a crunch time, Klym served an ace! The crowd let a collective shocked exclaim as the communication error brought up match point for the hybrid pair.

A front court scramble ensued on court before Klym found a winner to grab his second title of the weekend, and Tristao’s first. Tremendous finale to an exciting doubles final, which closed proceedings for the weekend.

Steel/Greasley played well, but seemed over-pressured by the situation as uncharacteristic mistakes began to sink in. Despite some strong play the pair lost in the semi-final of the open plate.

Briedenhann/Mills fought hard. They agonisingly lost out on qualifying for the knock out after missing out by just one point in the group stage. Every pair lost a game and it went on score. Frustratingly the pair that progressed – Siegersma/Broersma, had falled to Kathleen & Tessa in arguably the best doubles they’ve every played. The pair demolished the Dutch 15-7. Had they done so 15-5 it would have been them progressing – but these are margins of wallball!

In the plate the pair were never really troubled and jubilantly marched all the way to victory – Kathleen’s second plate title of the weekend and Tessa’s first. Congratulations girls!

It was once again the international superstar pairing of Scheffer and Beckers who dominated the grade to win the Open title.

It was a lone wolf battling here – the black widow himself, Chris Waller, pairing with a Spanish counterpart. The pair played well and really adapted to the game as the day went on. They didn’t walk away with any titles, but certainly walked away with a wealth of experience and inspiration for the future.

Huge thanks as always to the organisers and hosts of the event. Geert Vandervelden and Bauke Frans in particular – the ringleaders of a fantastic group of volunteers and helpers who made such a huge international event possible. Tremendous stuff – see you next year when the Dutch Open will be part of the new European ProTour!