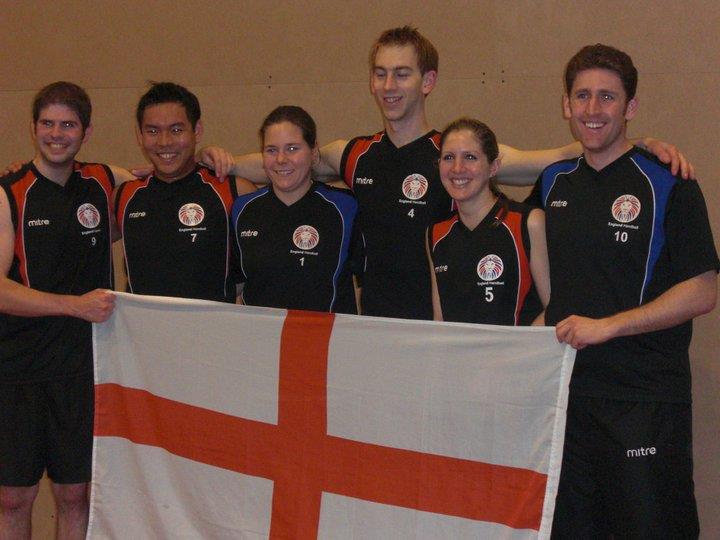 After England Handball’s groundbreaking year in 2009,writes captain Adrian Lee, I did wonder whether 2010 would prove to be a much tougher journey on the way to challenging for honours in the top international competitions. This year’s progress has taught me I must not doubt myself or my stellar group of England Handball charges in our quest to be become the top handballing nation in the world. We may not yet have the high levels of talent on court that the Americans and Puerto Ricans display, but you’d struggle to find a group of players outside Team England who crave success more than us.

Team England flew out on the Thursday from a miserably cold and wet Heathrow Terminal 5 and arrived on the balmy French Riviera at Nice airport in the early evening after a briefly delayed flight. The objective was to break through the glass ceiling and establish ourselves as minimum fourth in the world after this tournament. After some brief confusion as to where our Rugby Fives Association official spectator Dick Warner was (Nice has two terminals!) and rather embarrassingly holding up the Belgian and Basque teams, who’d been waiting a few hours for us, our bus set off for Imperia, northern Italy, in the region of Liguria. What should have been a delightful drive through the mountain roads much-loved by Top Gear presenters was sadly ruined by the darkness, but I’m assured it really is a cracking hour-long drive. We arrived just in time for a quick bite to eat and a catch up with our American counterparts who’d flown in 24 hours earlier.

The next day was supposed to be spent training in earnest for the weekend ahead and playing our traditional Ashes fixture against the Australians, but unfortunately the three venues where the Fed Cup was to be held were being hosted by three local schools. It being a Friday, our battle grounds were being used by swarms of Italian children, so we were forced to seek alternative entertainment for the day before the opening ceremony in the evening. The English squad took the time to explore Imperia and discovered a delightful coastal town resplendent with its own cathedral high up on a mountain. Handball tours don’t normally allow players enough time to fully explore the cities they’re playing in, so this was a nice change from the norm.  Highlights included discovering what very much looked like two-thirds of an Eton Fives court on the back of Imperia’s cathedral, as well as Dick spotting a new mountain swift he’d never seen before.

The evening’s opening ceremony allowed for an introduction of all the teams and also a brief discussion as to the first steps needed to gain handball inclusion into the 2016 or 2020 Olympic Games. At this point, Dick gleefully discovered he could suddenly understand Italian and helpfully translated everything our hosts were saying straight into a microphone for Irish TV to be broadcast at a later date. Peter Worth from the EFA also arrived at this point to support Team England’s cause. The full roster of teams for the men’s tournament was USA, Puerto Rico, Ireland, England, Mexico, the Basque region, Netherlands, Canada, Australia, France FFJP, France FFJB, Belgium FRNP-KNK, Belgium WBF and two host Italian teams. The women’s tournament included USA, Puerto Rico, England, the Basque region, Netherlands & Italy. The draw pitched England’s men in Group D with France FFJB and Belgium FRNP-KNK and our women in a group with USA and the Basques. For the men, the three other groups each contained four teams, which meant England would have to beat each team in Group D twice to be able to progress.

Play began in earnest on Saturday morning with an easy victory for England men against France FFJB and Cohen and Grant secured easy singles wins before Grant and Lee paired up to secure a win in the doubles fixture for a good start and 3-0 whitewash in our first fixture of the tournament. This result was replicated in the repeat fixture later in the day where Cohen and White won their respective singles matches before Cohen and White wiped the French aside in the doubles too. The men followed this victory up with a similar score line against Belgium FRNP-KNK, but it was evident now that the courts were playing like glass and it was proving particularly hard to change direction without losing one’s footing. The repeat fixture saw England drop their first game as Cohen showed a rare temporary loss of form coupled with a frustrating loss of footing to lose a tight singles game against the Belgian no. 2. He did however avenge this defeat by pairing up with White to convincingly beat the Belgians’ top doubles pair. The important point is that England had qualified top of their group to reach the quarter-finals of the Fed Cup. 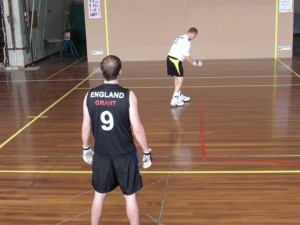 Grant on his way to taking out Van Impe of Belgium

England’s women had a similar result in their first round, as White and Rees rolled over the Italians with ease. There then followed a tough fixture against the Americans, who lived up to their top seeding and beat England, leaving us with a must-win fixture against the Basques, a team we’d never beaten in all three years of international play. White won her singles convincingly to get England off to a great start, which meant that if Rees won hers, a quarter-final berth was assured. Unfortunately, she went a few too many points down at the beginning of her match and, despite a late comeback, she was defeated by the tightest of margins, meaning it all came down to the doubles match. Thankfully, the girls held their nerve and walked out comfortable winners to ensure their place in the next stage of the main competition.

England’s next fixture was against the other rival Belgian side, Belgium WBF, which gave us the bizarre record of having played a Belgian team at an effective world championship no less than three times in one day!  Grant gave his teammates a few scares by going 6-0 down to the Belgian’s elder statesman, but then went on an unanswered run of points to close the game out 15-6. Cohen was keen to prove that his blip in the previous match was a mere anomaly and showed all his power, poise and guile to put away his tricky Belgian opponent. One spectacular point in particular to set up match point springs to mind and demonstrated just how important the match was to Cohen personally. A semi-final berth secured and a minimum world ranking of fourth, Grant & Lee then went ahead to put the icing on the cake by totally blowing away a vanquished Belgian doubles pair.  The result meant that, for the first time ever, England would have both their men and women competing for the top prize in team handball. 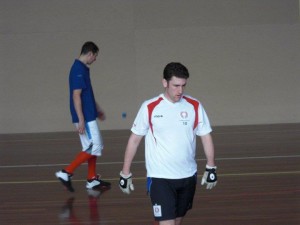 Both men and women’s teams were lined up against Puerto Rico, with the other semi-finals lining up as USA vs Mexico (men) and USA vs Netherlands (women).  While the results of these semi-finals may read as one-way traffic as Puerto Rico came through with two wins, much was learnt by both our men and women’s players for whom it’s rare to be able to step onto court with such talented athletes. Realistically, we were never meant to challenge the no. 2 seeds on paper, and there was no shame in the final result against them.  Importantly, though, the respective defeats set up a 3rd/4th playoff match against Mexico for the men and the Netherlands for the women.

England women were off first and White streaked into the lead in her match against the Dutch no. 1 with a string of strong serves and “1-2” kill shots which delighted the crowd. However, in a classic case of the game of handball never being what it seems, the Dutch player than started a ferocious comeback, and if it hadn’t have been for Kerry’s experience from the Fives world that pulled her through to win, she may have come second best. Rees unfortunately started slowly in her singles match and, perhaps wary of the Italian TV crew behind her, seemed a little nervous, but slowly started forcing her grip on matters. Sadly, though, a late surge of points from the Dutch no.2 meant that the playoff win would be decided by the doubles fixture. The girls gave it their all and showed great retrieval to keep things tight, but were edged out in the end by a jubilant Dutch pair, who perhaps on the day played a little better than our girls.

It was the men’s task to try and exact revenge for our women – and it was against the much-fancied, but largely unknown, Mexican team who were exclusively three-wall handball players, and unbelievably had never played 1-wall handball before the Federation Cup. Grant was up first against their 20 year-old wonderkid and for the first 10 points was completely blown away by the Mexican hurricane. This was nothing to do with Grant’s play, but more a sign of quite how special the Mexican player is. After a strategic time out followed by some crowd interaction skills from Grant, he slowly began to work his way into the match, and the final score shows both respectability and also some of his own flair. Cohen’s secondary singles match was a much more close-run affair, as he mixed up outrageous attack with stubborn defence to eventually go down by a mere handful of points. His opponent, while not quite as mobile as their no. 1, still possessed an ingrained know-how as to how to kill the ball from various court positions that he’d picked up from his many years on the three-wall court. By this point, the spectators were settling into their seats in preparation for the final of USA vs Puerto Rico in both the men’s and women’s competitions, but they had one last treat as Grant and Lee – along with the Mexicans – treated them to a flair-filled doubles match. Despite the best efforts of the Italian referees to close out the game early so the final could go ahead, the players persevered, much to the delight of the crowd; and, as the Mexicans finally closed out the match 15-10, both Mexicans and English were happy with their weekend’s work. The women’s final was eventually won convincingly by USA 2-0 while the men’s final went the other way as Puerto Rico defeated Team USA. 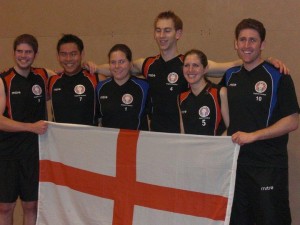 There was nothing left to do in the evening, but to go and celebrate England’s new highest-ever world ranking by furthering international handball relations in the nearest watering hole. Regardless of our performance on-court, Team England has always found a ready ability to excel at this particular part of international handball tours. Many thanks to Dick Warner and Peter Worth for attending the tournament as respective RFA and EFA spectators, and also to my hard-working and hugely talented squad of players – not only those that were selected for the tour, but all those that have trained with us this year. Special mention also to Marianne Rees for successfully embarking on her first representative international handball tour. Everyone can be very proud indeed of Team England’s most successful year to date. 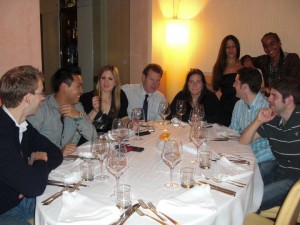 The Team enjoy a nice dinner out