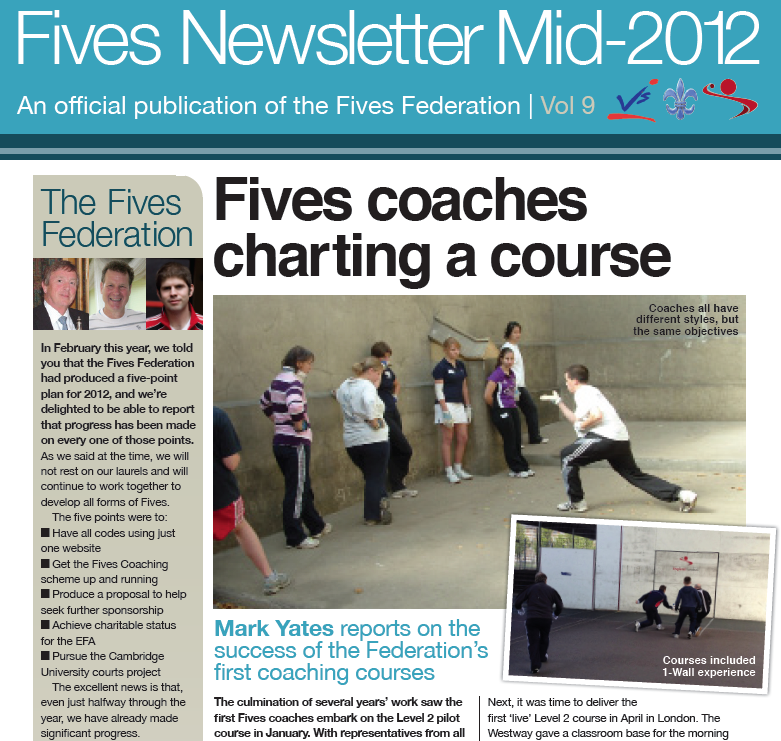 You can read the Sep 2012 President’s (Daniel Grant) report below, and you can download the full newsletter here:

This has been an interesting six months for England Handball. For starters we’re not called ‘handball’ anymore. We’re fully behind the initiative to see 1-Wall make it into the Olympics and so, in line with the rest of the world, we’re transitioning to ‘WallBall’.

So let me start again. It’s been an interesting six months for UK WallBall (that’s right, we’re not just ‘England’ any more – we’ve expanded!). There have certainly been ups and downs, but I’m pleased to say the outlook is very bright indeed.

1-Wall has suffered from something of a temporary slump and we’ve seen adult numbers fall. 1-Wall is a tremendous game and it presents many chances that Eton and Rugby Fives don’t – so I would encourage everybody to give it a go.

The sport in general, however, is beginning to gather speed. After several meetings we’ve now gained the backing of the MP of Enfield, University College London and Camden Council. We’ll also have a proposal on Boris Johnson’s desk once he’s done with the Olympics and we’ll attempt to mirror the New York model where there are currently tens of thousands of people playing on more than 2500 courts.

We’ve also partnered with the charity StreetGames, which brings sport to more deprived communities across the UK. Needless to say, WallBall is a perfect fit and we enjoyed great success at a fundraiser at the Kia Oval in May (see previous page). We’re now looking to run a pilot programme with the charity in the autumn and then expand in 2013.

It is also an exciting time for Team GB (that’s right, not ‘England’ any more, either!). We’ve got the World Team Championships in Holland in August and the World Individual Championships – the biggest event the sport has ever seen – in Ireland in October. It’s still not too late to come if you fancy a fun tour to Ireland playing the sport. You can enter the novice grades, have a great time and meet thousands of like-minded people from around the world!

In short, the future is bright, so if you can, get involved!