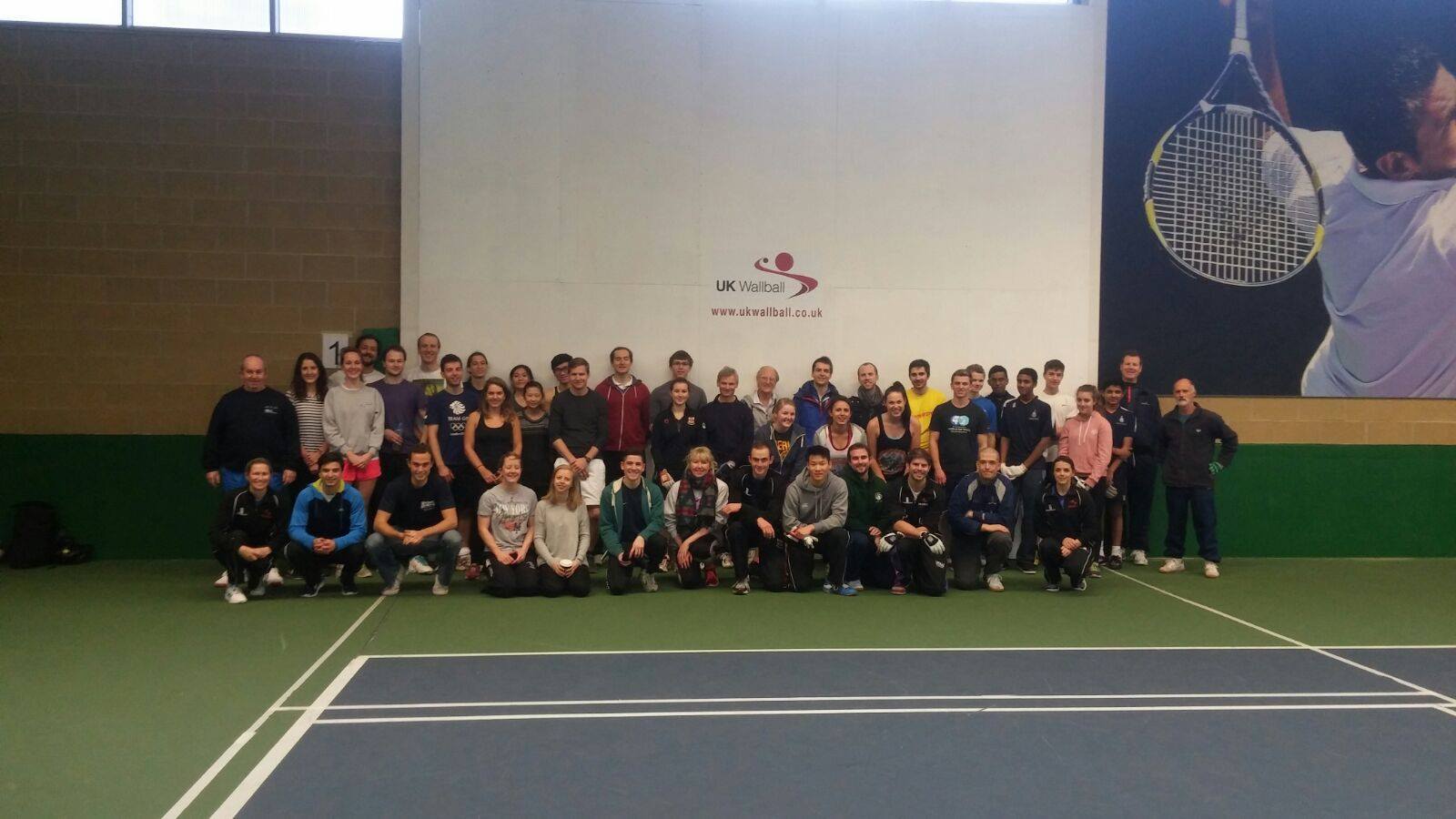 With over 70 novice competitors, including 15 school girls aged 10-13, this year’s inaugural Wallball UK Nationals was a resounding success.

[/tab]
[tab] 88 competitors across the weekend

17 hours of solid play on 4 courts

Over the weekend of 21-22nd November almost one hundred men & women, boys & girls – many of them novices, took to the wallball courts at Westway for our first ever Nationals.

The emphasis of the weekend was certainly on “fun” and “giving it a go” and all our competitors lapped up these sentiments in aces. The idea was introduce beginners to the game and it was superb to see how people went from never having hit a ball in the morning, to being a rallying superstar by the afternoon. We thank everyone for their enthusiasm and their delightful open mindedness. 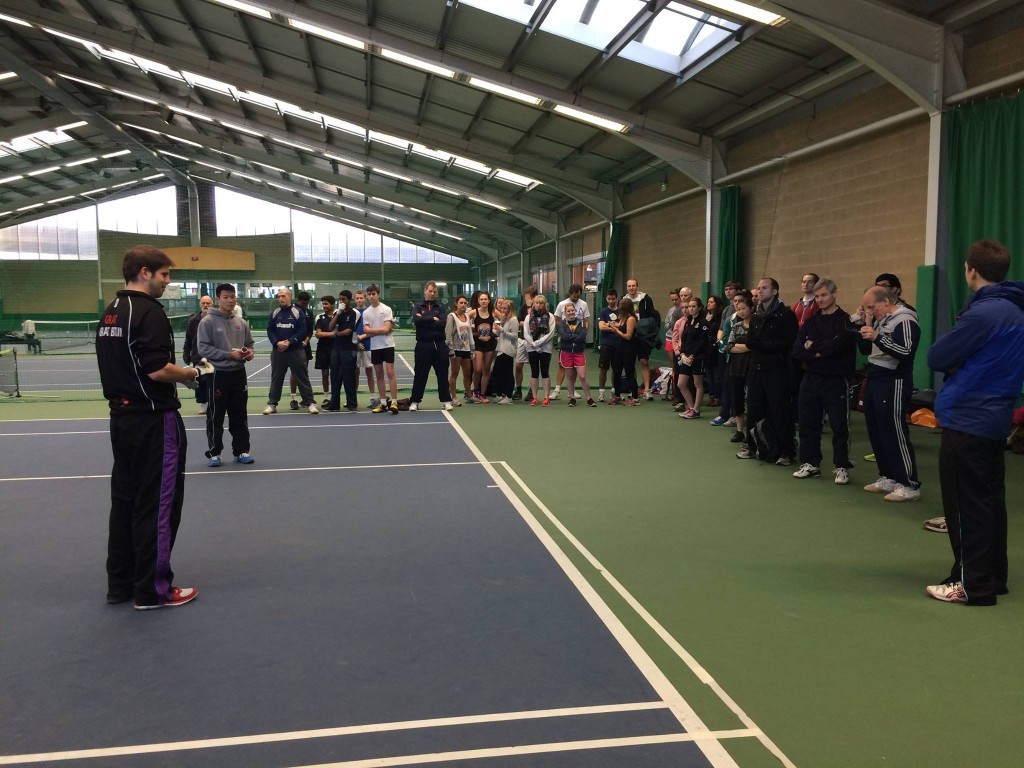 Doubles competitors get ready for a day of fun

Saturday saw people take to the courts for singles and, accompanied by some serious 90s dance music from our random music generator, players swarmed the courts.  In the men’s grades it was no surprise to see the cross-over players from Rugby Fives take to wallball like a fish out of water. They dominated the brackets and the final between Ed Kay and Theo Parker was something special. It went right down to the wire and it was Ed, at the last minute, who nipped the victory with a glorious right handed cross court kill. 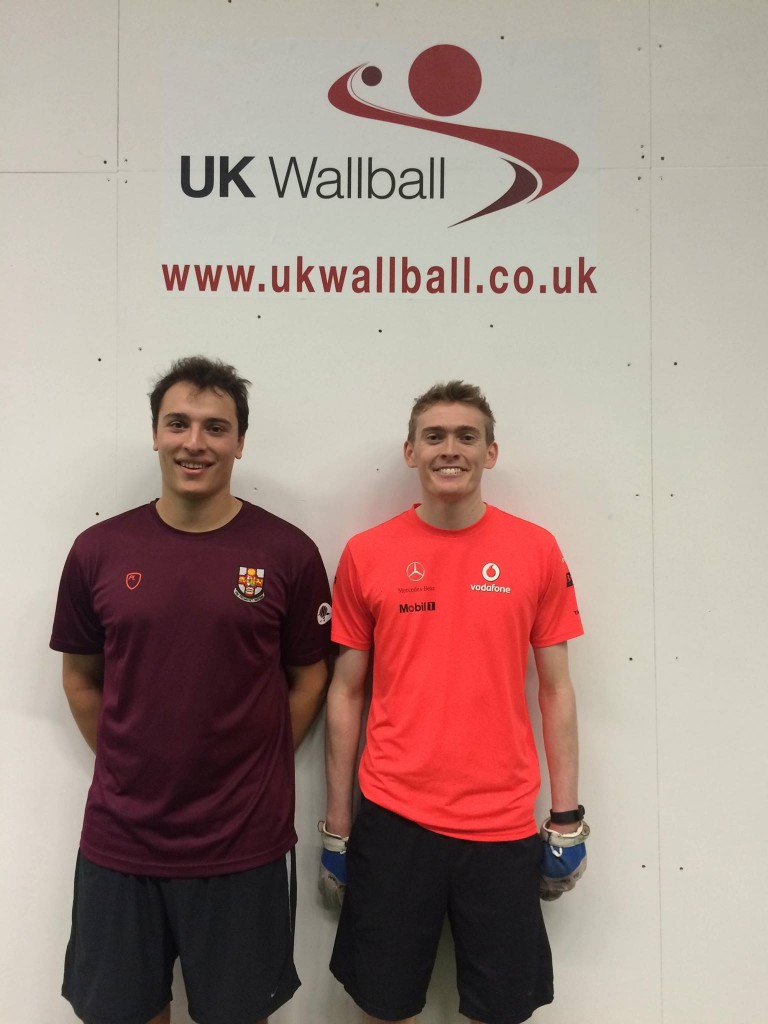 Ed on the right, flaring his nostrils at his first wallball victory, over Theo Parker

In the Over 45s it was Dick Warner who triumphed – and as the Dutch Open Over 45s champion from 2 years ago, we would expect no less. More impressive is that Dick could play in the over 60s if he wanted to! He played the final against his doubles partner, Tony Hamilton. But all was not lost for Tony, as he went on to win the Beginner’s Plate. 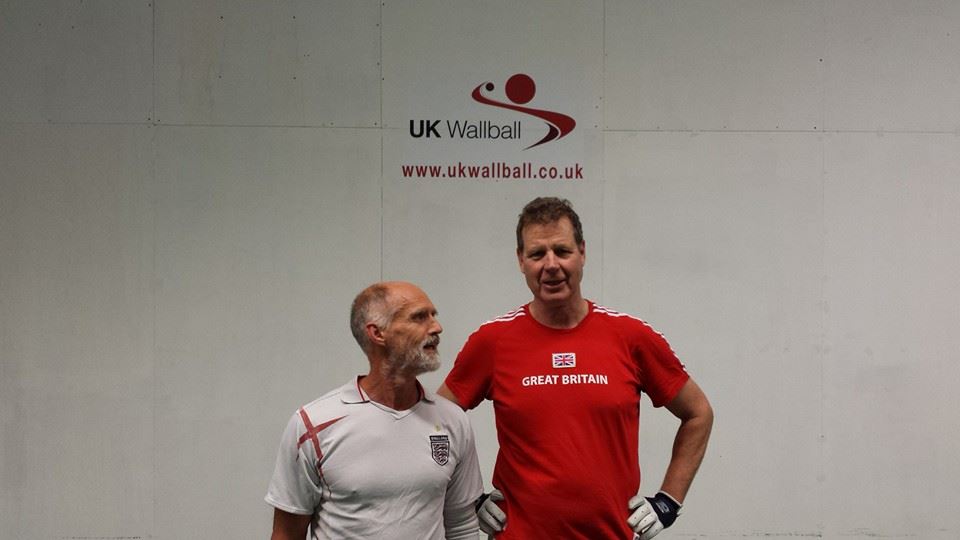 Tony looks up to Dick after another famous victory

The women’s beginners saw 14 school girls and their teacher, Liz, from Streatham & Clapham High School take on a few new fresh faces. The girls were exceptional, ducking and weaving, using both hands and occasionally diving for the ball. Issy Mickley was most impressive and came out top of the pupils, but sadly couldn’t beat her teacher, Liz Basson in the final. Liz dominated the day with fantastic hand eye coordination and destroyed both physiotherapists from UCLH and her own pupils on the way to glory.

The Women’s Open was a spectacular affair between our GBR girls, Kathleen and Tessa. Could this be the turn of the tide? Both women played the best we’ve ever seen them play and it was Tessa who was simply on fire. She took a big lead in the final, dominating with her impressive hammer-like right hand. Kathleen had no answer and Tessa went on to claim her first UK Wallball title. 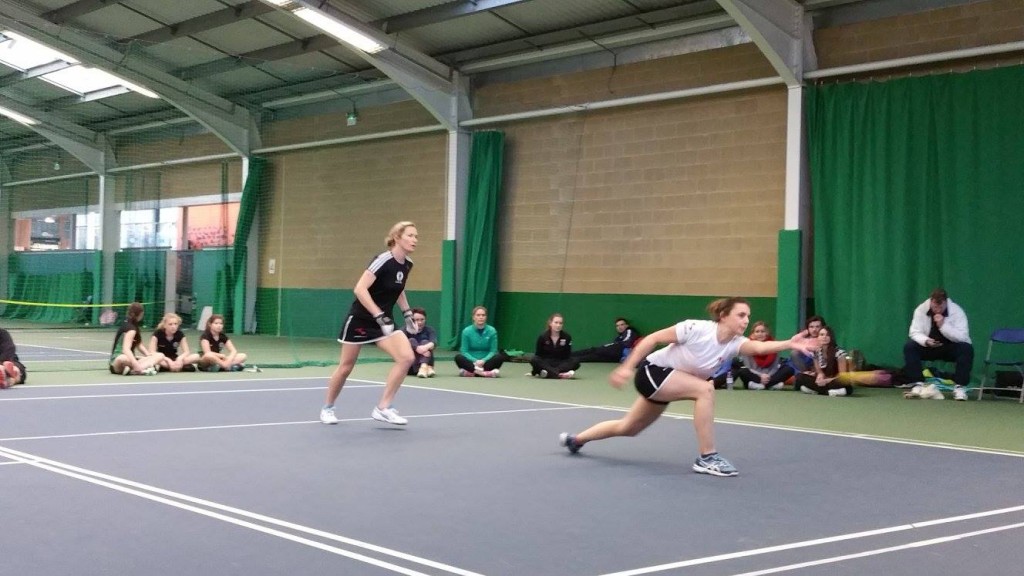 Tessa on fire this weekend cracks out another kill

In the Men’s Open again it was no surprise to see Britain’s no.1 & no.2 in the final – both of whom had had recent impressive results in the European ProTour. Daniel Tristao and Daniel Grant battled it out in a real classic. This year we pioneered a new scoring system – instead of scoring points only on your serve, we wanted to champion the ‘all-round game’ and use rally points – tennis tie-break style. This system proved a resounding success and the game was nail-bitingly close. Tristao took the first game 21-14, but Grant came back in the second and saved 2 match points to win 22-20 (by 2 clear points). In the third game tie-breaker it was neck and neck for a long portion until Grant made a couple of hand errors and Tristao capitalised. He took the game 11-6 and closed out a famous victory. 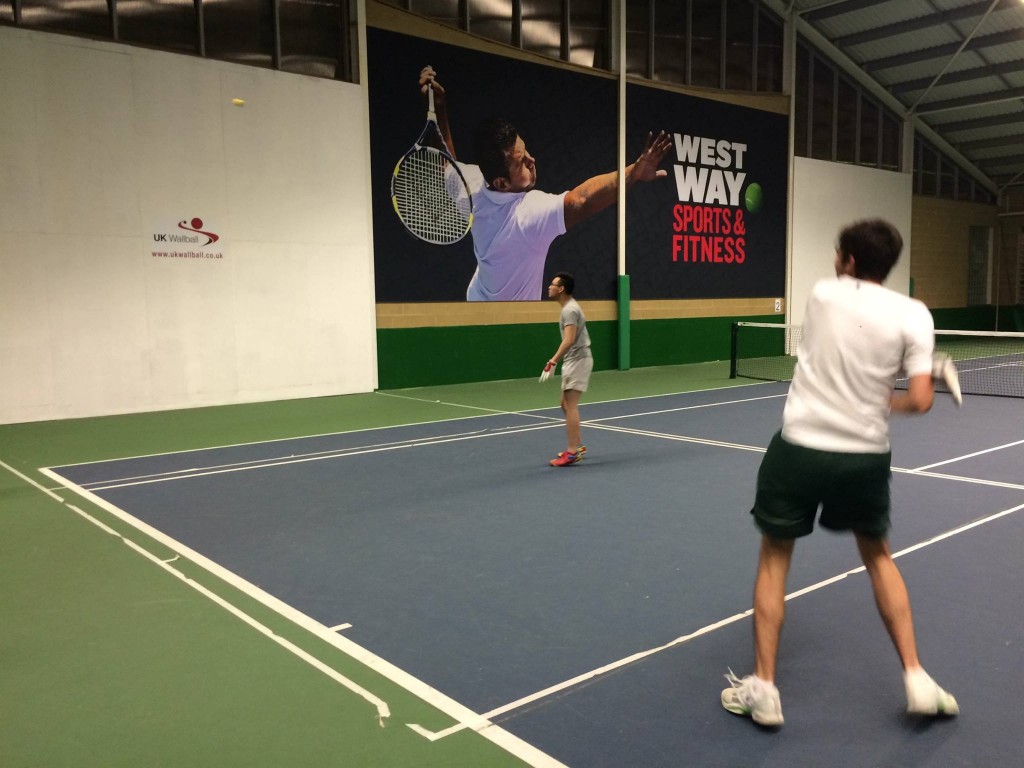 Jonti takes on Ian Chai in the plate

On Sunday we had the doubles and even more novices took to the courts in a sociable and engaging day. Once again, the beginners really surprised us with how well they both took to the game and how downright impressive they were by the end of the day.

In the Ladies Beginners Doubles there was no stopping the school-girl Rugby Fives Champions. Louise Mathias (who won the u18s last year) partnered Katie Sumner (current u13 champ) to impressively defeat all opposition. In the final they came up against Sarah and Sarinka who battled valiantly all the way to the end. In the plate competition there were some great games. Linda Mao and Angel Chang improved doggedly over the day and the girls from Imperial did really well. The final saw Alex Barry & Maria Nelson defeat Sioned Read & Melissa Swain in a classic encounter. 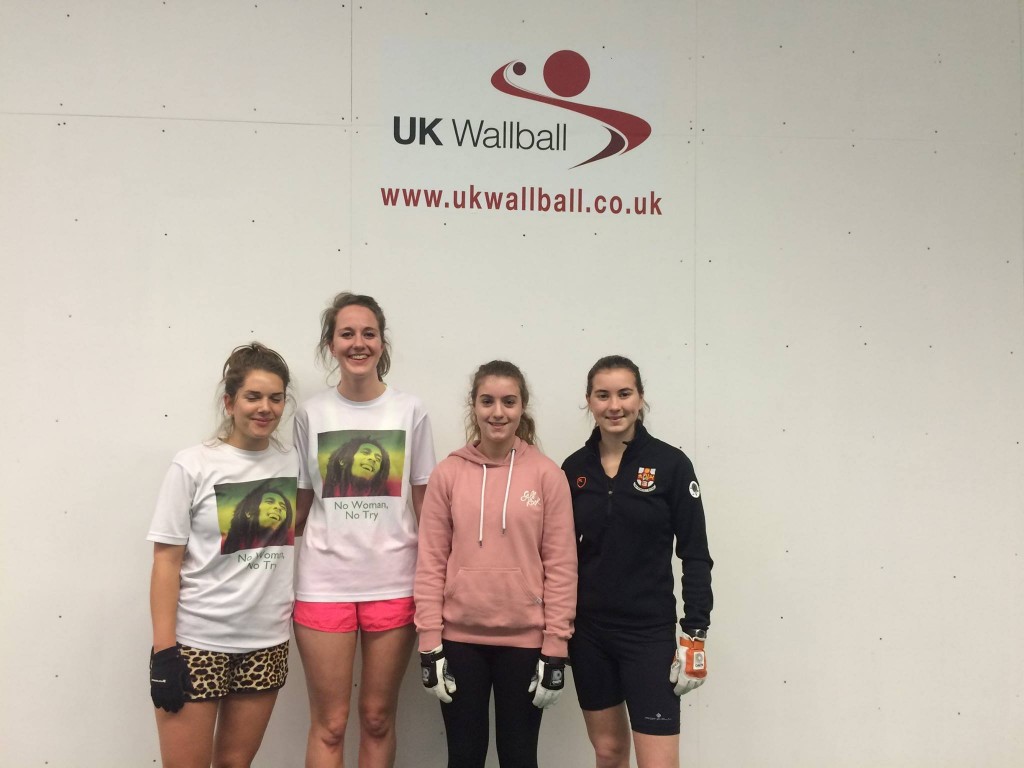 Success on the right for Louise and Katie, over Sarah & Sarinka

The Men’s Beginners featured some great competition. Jonti Davies & Matt Holliday, who took up the sport only a few weeks ago, gave it their all and approached the game with the kind of camaraderie and sportsmanship we love to see. Jez Fabes and Ed Ronan seemed so good until they were undone by the the tenacity of Warner and Hamilton. In the end it was James Tilston who was seemingly unstoppable, carrying his injured partner all the way to the final where he took them apart with precision and skill. 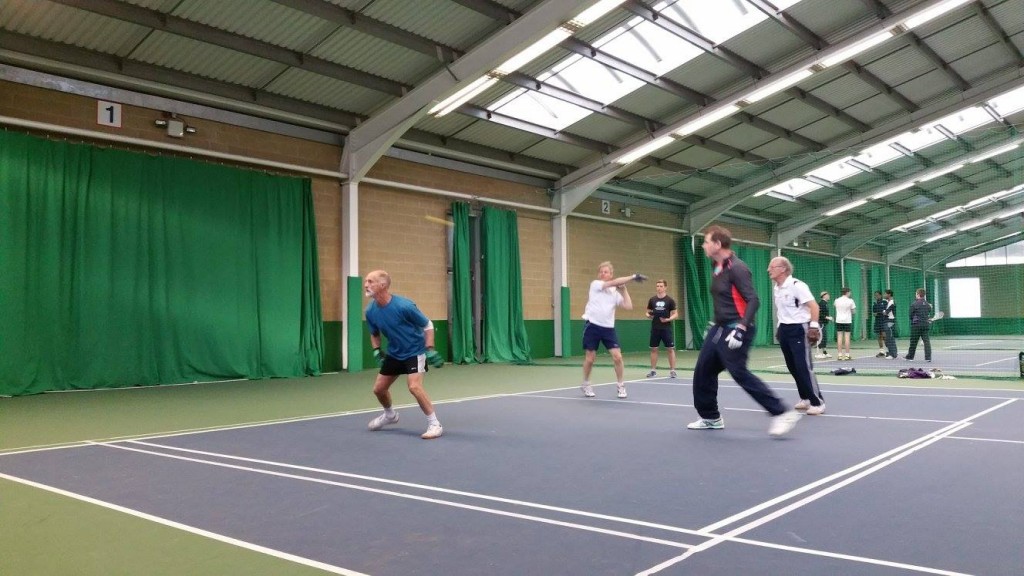 Proof that this really is a game for all ages!

The Men’s doubles plate was won by two school boys from Whitgift – Cameron Low and Sarath Prakash, who have been coached by ex-England player, Dave Mew. And it showed.

Finally the Men’s Open. Here the strong pair of Daniel Tristao and Will Ellison comfortably made the final. They looked as if they would play either Daniel Grant & Ollie Arnold or Luke Thomson (returning after a 6 month sabbatical) & Penn Chai, GBR’s newest development player. In the group stage Luke & Penn cut a famous victory over Dan & Ollie and it was that result that saw them make the final.

The epic game to 25 was something special to see; both pairs showing serious skill and determination. Tristao’s smart play and quick footwork, combined with Will’s exceptional right hand and back-up (and one stage running off the left side of the court to retrieve a ball Dan had missed, scooping it in from 20 feet away) paired up nicely against Thomson’s inimitable left hand kill and Penn’s solid drives. Penn proving the one of the most effective doubles tactics is a safe and reliable blocking side, whilst the power side kills and attacks – tired and tested in New York! However, as Tristao & Ellison grew clear it became obvious that their victory was never in doubt and they closed out the game in style. 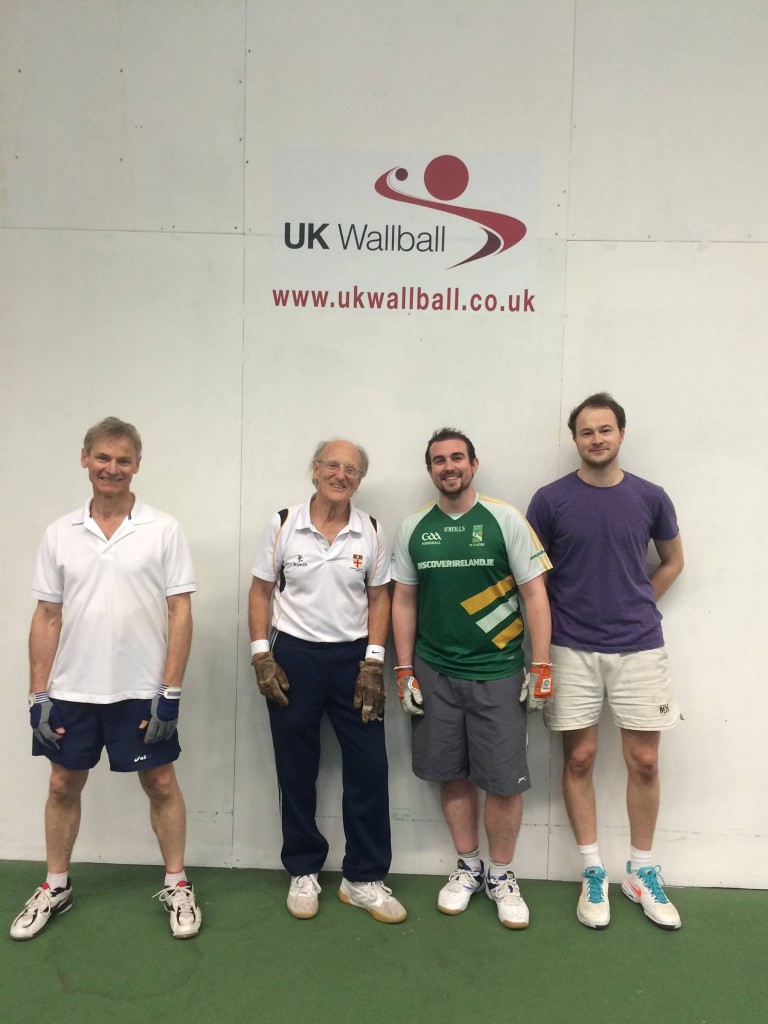 Atkinson and Passey – left, take on Dyke and Wall

Thank you to everyone who played, everyone who refereed and everyone who helped volunteer to organise such a splendid tournament. Luke Stradwick, in particular, deserves a special mention for all the hours put in behind the scenes (and up the wall with a ladder). We’re delighted with the weekend and we hope to see many of the novices back on court in the new year to take up the sport on a more regular basis.

The UK Open is in February and the Adult club will start again in January.