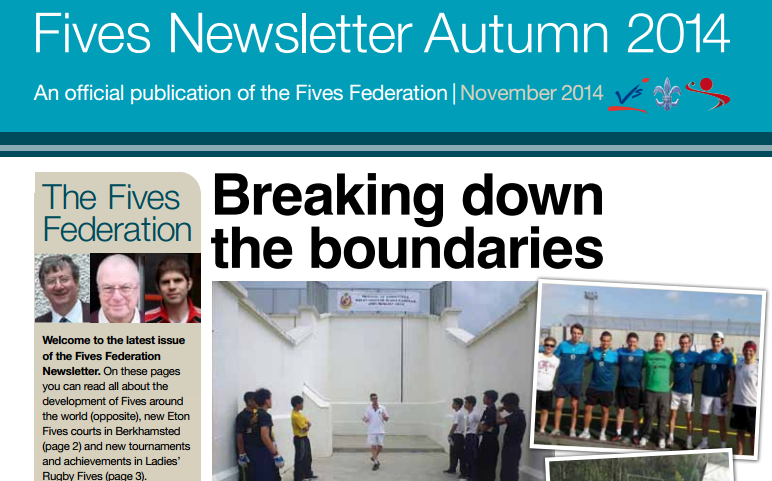 You can read the Nov 2014 President’s (Daniel Grant) report below, and you can download the full newsletter here:

We’ve had an impressive six months at UK Wallball, both on and off the courts, which can be summarised in terms of walls.

Building walls:
We’ve really upped the wall quota this year. After seven years, the Westway Centre has agreed to build some walls. Two beautiful regulation courts are now available indoors at the Westway Centre and we’re hoping to run sessions hand-inhand with Eton Fives outdoors. Meanwhile, in Kent, Luke Thomson has worked tirelessly to get two walls set up in Gravesham. He ran several taster sessions in the summer and a small club has now launched. In recent developments we’re also in planning meetings to have some free-to-access outdoor courts built in the Olympic Park.

Playing on walls:
The last newsletter came out on the cusp of the UK Open and what a tournament that was. Unbelievably squashed into two days, a tireless band of volunteers ran an exceptional championship featuring more than 110 players and 234 games. What’s more we managed to run a clinic at the event for younger players featuring some of the top players from around the world and we used the event to create a fantastic new promo video, which I encourage you all to watch! Later in the year Dan Tristao performed valiantly at the Italian Open, I was lucky enough to compete in the warmth of Australia and to top it off I was humbled to captain a remarkable young GB Team at the World Championships in Valencia back in September. GB got the bronze medal and we’re officially the best team in Europe.

Coaching on walls:
The UCL Volunteering is up and running and last year we trained up nine students to coach wallball at Kentish Town and UCL Academy. We hope this year the project will go from strength to strength and at the same time bolster the UCL Fives Club and get them some much-needed funding from the union.

Walls being a tenuous link:
Okay, couldn’t really think of clever segue there, but crucially there’s a few other bits of news to know about that don’t appear on these pages (but do on www.ukwb.burrowsca.com). We’re introducing membership in January, when we’ll also be launching an online shop for all your Wallball needs and we’re launching the new European Pro Tour in 2015 at the UK Open on 14-15 February. Save the date and come along and play in the beginner grade – it’s designed for people who’ve never played Wallball before – and that’s most of you. See you on court!