British Success at Last! It was Valentine’s weekend in 2016 and Daniel Tristao gave all his time to his one true love – smacking balls. This year he did it spectacularly and having shown immense promise over the past 6 months – both winning the B Singles at the World Championships and more recently narrowly losing in the final of the Belgium Open, it was almost inevitable that he would contend strongly for the UK title. He came through second in his group, losing ground to Torres from the USA, but pipping Thomson to the post in a nailbiting and crucial group stage match. He then cruised his quarter final before coming up against his compatriot, Grant, in the semi-finals. This match was neck and neck for almost half an hour before Tristao gained the edge in the closing stages.

The final was against USA’s Mike Ngai, who had won the French Open last year – beating the great William Polanco. The match was astounding. Mike is a clear Open player in the USA now and it showed as he put away shot after shot into the bottom left hand corner. But Dan is a retriever of the highest order – without a doubt his speed and change of direction is amongst the best in the game and time and again he forced Mike to play an extra shot and eventually forced an error. He got a good lead on Mike, but then the American took his precious one time-out and came back in “beast mode”. He closed the gap to the narrowest of margins and what had looked like Tristao’s game now lay in the balance. It was 19-17 to DT. Fortunately for our plucky Brit the Yank made an agonising error and as Dan came back in he played the slow down lob game that had worked so well against Grant and Marcus Bate and came through in a historic victory. The first GBR player to win a European Open since Grant way back in 2011. 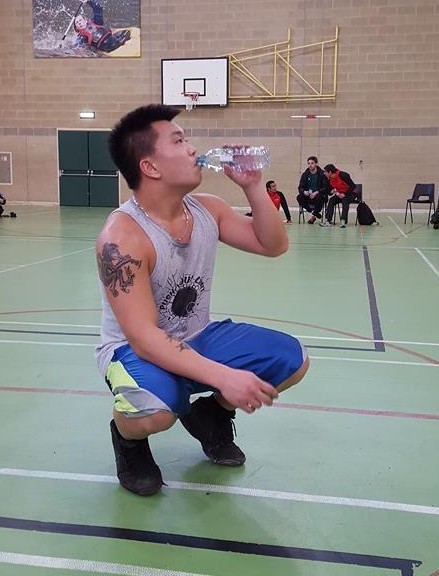 In the Women’s Open the two top seeds cruised to the final as Lorraine Havern of Ireland took on women’s no.1 Miranda Scheffer. Nerves abounded as Lorraine is a dark horse, rarely playing the European ProTour, but has world titles to her name. Miranda has never won the UK Open – the only title which eludes her. She got a great lead as Lorraine made some uncharacteristic hand errors but when she was moments from victory mistakes crept into Miranda’s game. A wide shot here. A double fault there. Could she blow it!? It was not to be. Lorraine hit a shot wide and Miranda screamed in ecstasy as she completed her collection of at least one title from each European stop.

In the B Grade the two players who really shone were a much improved, dangerous and consistent Daniel Kavanagh from Ireland (this guy is going places!) and the new player from the USA, John Sese. The final was a close fought affair and despite Dan’s best efforts it was John’s New York driving power that scored him the win.

The Beginners Grades for both Men’s and Women’s divisions were full to the brim of fresh players and it was wonderful to see so many people giving the game a go for the first time or taking the big step into competition from social play. Particular mentions here must go to two British players who had barely hit a ball before today. Shinan Zhang of Southampton University made the semi-finals of the women’s division with immaculate hand-eye coordination and Cameron Lowe, the schoolboy from Bedford, was on unbelievable form. Not only was this the 2nd time he’d ever played, but he dominated many of his matches, retrieving and killing like a veteran. In the final he was undone by Boomsma from Holland who lived up to his name by booming the ball at a pace too fast for poor Cameron. 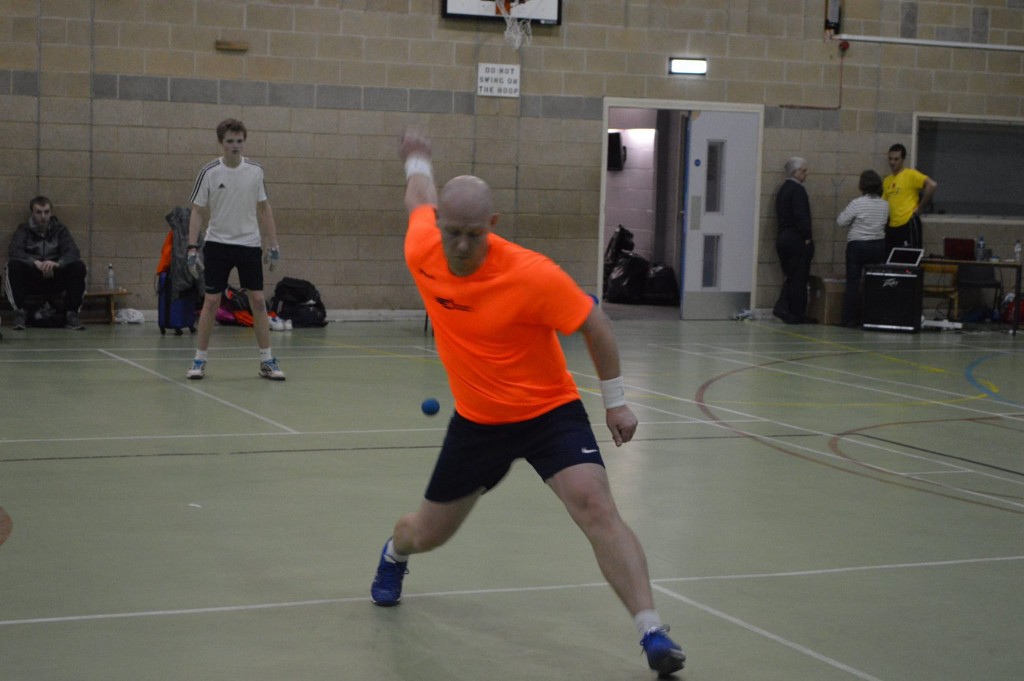 Boomsma booms a serve to Cameron

In the women’s division Cailosa Ni Dhuill outplayed a young Siobhan Prentice to win her first (of many we hope) UK titles. 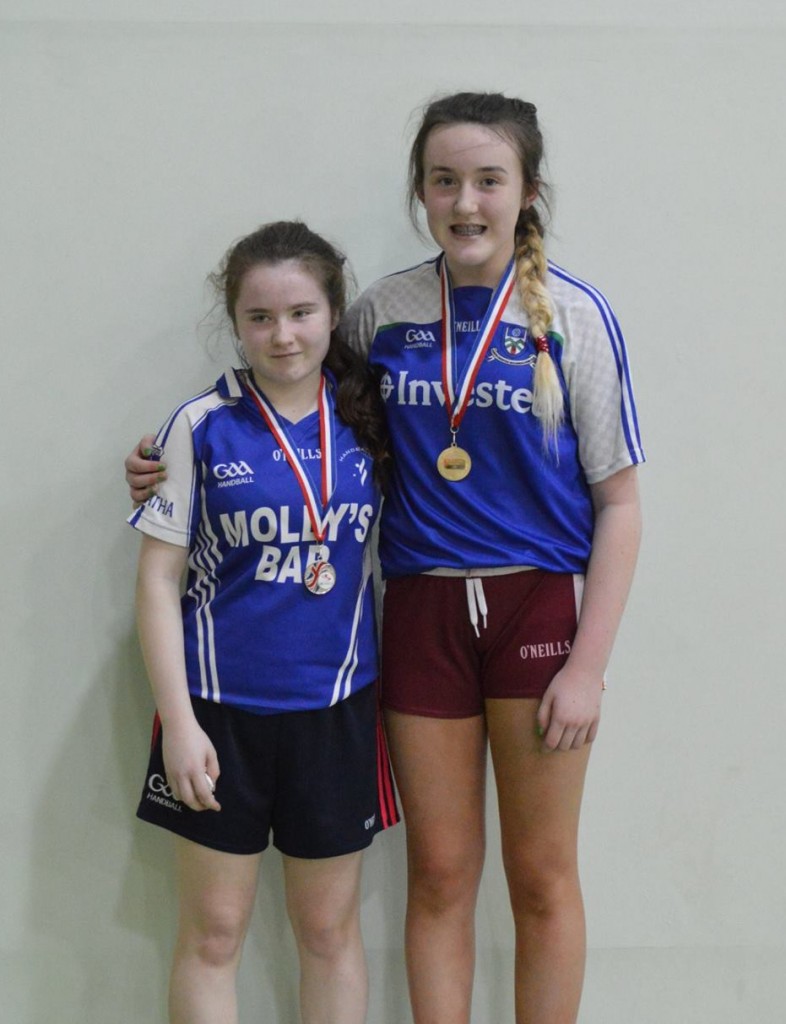 The doubles showed another great display of athleticism, sportsmanship and camaraderie from all players on show. Once again the beginners grades had some great matches and it was fantastic to see our first ever contingent from Portugal coming over and competing in the Open. Much improved from last year when they started out, the Portuguese have real potential and we support their expansion with all our good will.

The highlight of the doubles was probably the group stage of the Women’s Open. A big round-robin saw all pairs play off against eachother and on paper you’d have to say that Scheffer and Siegersma from Holland, and Havern and Mcelduff from Ireland were hot favourites to make the final. In the end, anti-climactically, they did, but it was oh so close to a different story. The spritely, fun-loving, karaoke singing, unnecessary diving champions from Holland, Marrit Zeinstra and Anne Monfils almost caused two huge upsets. The pair were the youngest competing but they’ve come so far in the last few years and we have no doubt they are the champions of the future. They took both the top pairs all the way and indeed had match points against them both before agonisingly losing them at the 11th hour. The games were so close and so magnificent that play unintentionally stopped on the neighbouring court to watch the conclusion!

The final was a hard fought affair but the Miranda and Harmke from Holland are now specialists in power and consistency. They have adapted well to the 1-wall game and hit it straight and accurately. The Irish still have a tendency to hit a side-arm shot and while when it works it works, sadly their unforced error count was a little too high. Miranda Scheffer achieved her dream and did the double. 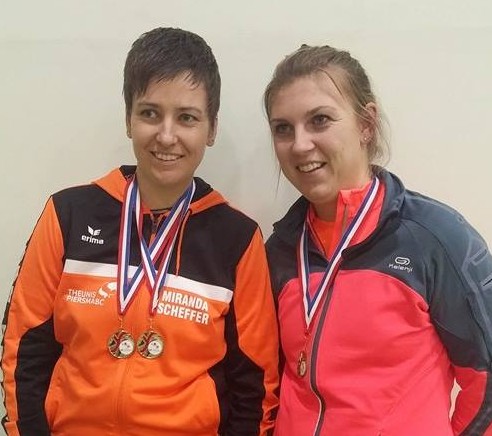 In the Men’s Open the top 4 pairs fought it out in the semis as per expectations. The Irish pair of Kavanagh and Quish had some magnificent runs against the Brits, Grant & Tristao, but the latter pair proved too strong in the end. The other semi was a hot headed affair – 3 New Yorkers and Luke Thomson (playing with Ngai) went at it hammer and tong. Hard hitting Danny Torres and super consistent John Sese were always a nose ahead. Ngai’s frustration began to show by the end of the match and errors abounded at just the wrong time.

The final was a solid match but the Americans were too strong for our Brits, playing at a pace we’re still not quite used too. Strong and efficient, it was great to see Danny and John place, kill and split the opposition. There were some good moments from our boys though – Tristao showed why he won the singles by killing in front of him wonderfully and Grant’s deft touch on the lobs won some crucial points. In the end though, Torres and Sese won a well-deserved title.

In the Men’s B grade it was superb to once again see father and son pairing of Brian and Eugene Kennedy make the finals. They lost last year but you can tell these guys are related as their seamless play has the air of a pair who know each other inside out. They played fresh pair Colm Grace and Jelmer Siegersma in the final and Brian’s immense power and Eugene’s consistency were too much for the others. The Kennedys did one better than last year and scored a famous victory. The stress levels were all the higher as Eugene needed to leave almost immediately to catch his flight. We hope he made it….

In the Beginner’s we once again saw the appeal of Wallball as a sport for all as everyone took to the sport with a smile on their face. In the men’s it was Cameron Lowe again, this time with his partner Hijane who made the final and sadly again Cameron was pipped to the post by a slightly more experienced pair. Dan Breen and John Bosco Hurley from Ireland took the title and played with the kind of respect and good humour that we’ve come to love.

The women’s division saw our very own Maddy Raynor emerge victorious with scratch USA partner Crystal Kwok (roped in to play at the last minute). They beat Mary Havern and Siobhan Prentice in the final. This was another tremendous game from all players we were thrilled that this capped off an incredible women’s entry this year. 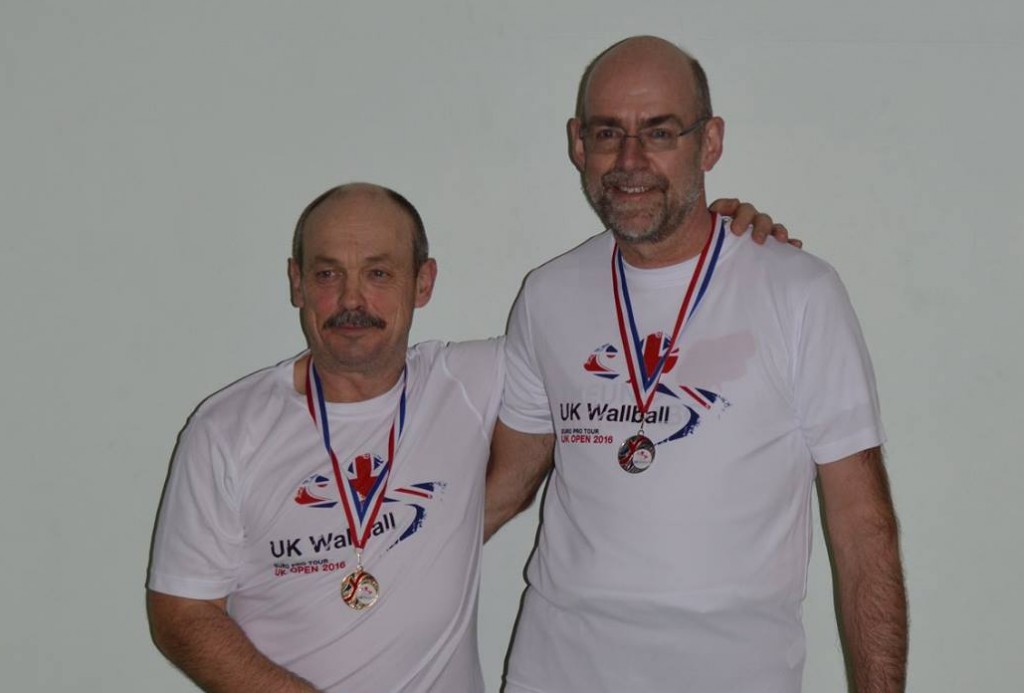 Winner Brian, on the left, with runner-up Theunis

Last but not least was the Over 40s. This division has typically been dominated by the brilliance of the Great Dick Warner, but alas this year his cries of passion were in vain. With some quite remarkable play in the singles it was Brian Havern who came to form – finally winning a gold for the Havern family, and in the doubles the years of Westway Club practice paid off in spades for Freddie Rowe and Gavin Denman as they conquered Theunis Piersma and Sijmen Scheffer in an epic final.

As always huge thanks must go to everyone who made the UK Open possible. Not only the players who have travelled far and wide and conducted themselves with the good spirit that makes us all feel like family, but also the volunteers who refereed, manned the desks and helped with food. Chris and Julie once again were the saviour of the catering, with Gareth Price out and about to pick up the supplies. And finally Luke Stradwick – turning 30 and spending his birthday running the smoothest UK Open to date. Thank you and see you next year! 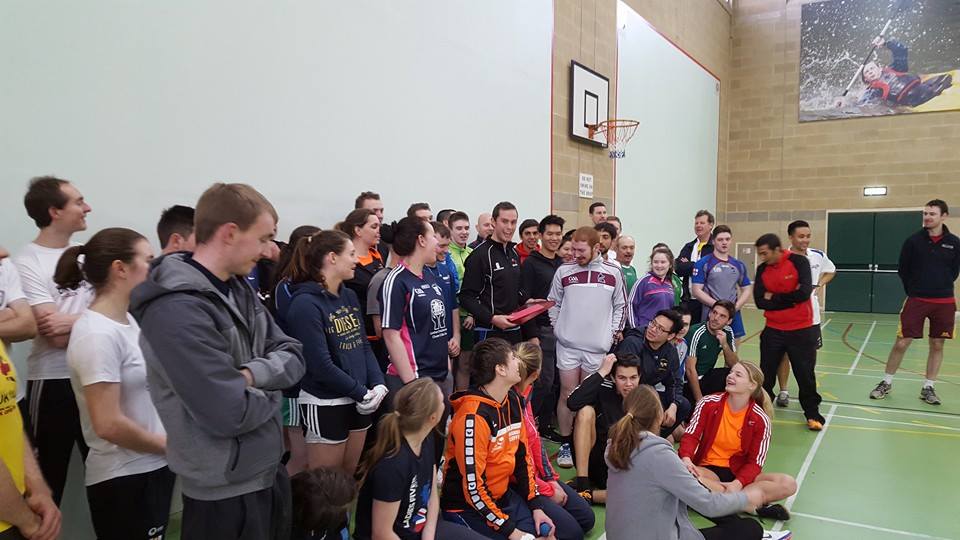