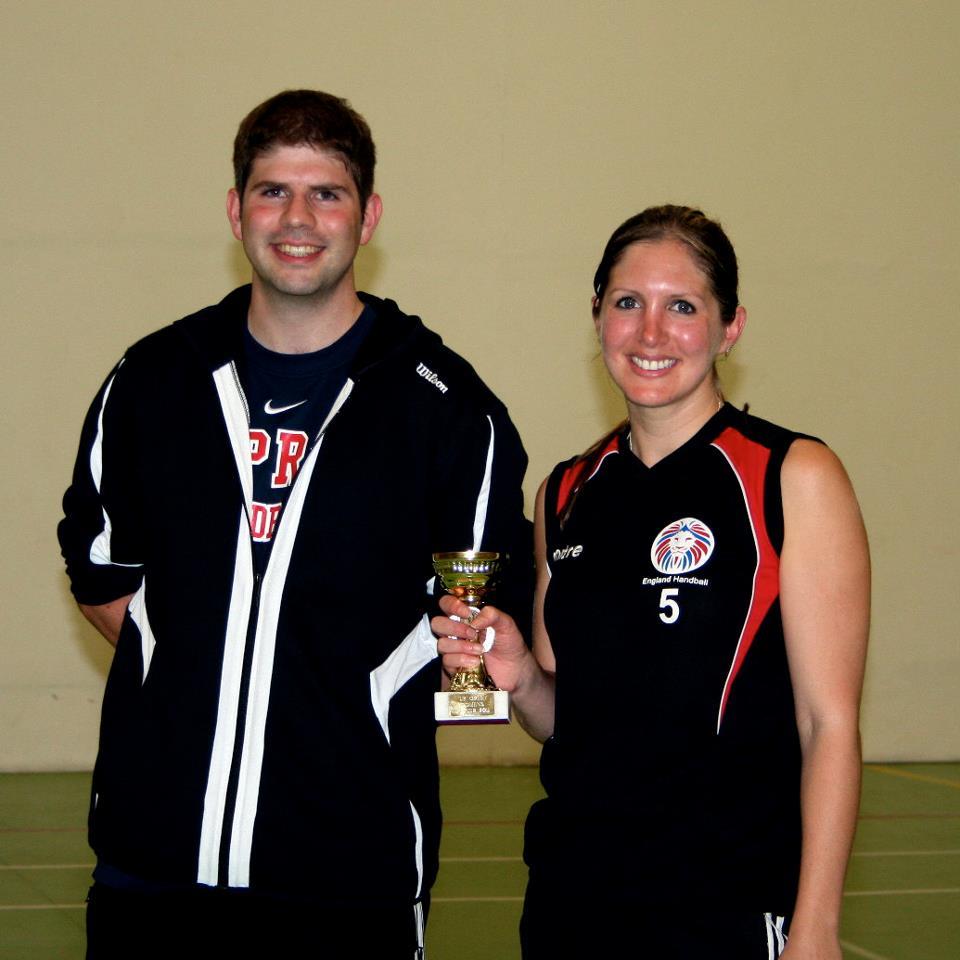 The largest entry into a UK Open to date guaranteed a rich day of handball full of skill, fun and burgeoning talent.  Over forty contenders descended on Merchant Taylors’ School in Northwood – some from as far afield as Belgium and Ireland –  for the prestigious event and donned their gloves for some serious action.

There were four grades this year: Challengers, Women’s Open and for the first time U18 and Pro divisions.  After a player’s dinner on the Saturday night play commenced for the Challengers at 9am.

The Challenger division was a strong and varied field this year with seasoned players taking on novices in surprisingly tight matches. Slick scheduling was dealt its first blow with the first match between the Rugby Fives (the UK domestic 4-wall game) President, Dick Warner and novice Bhaswar Baral who slogged it out for 40 minutes before Dick came through 21-17.  He then had an exceptionally tough match against handball veteran Richard Price who eventually beat him 21-18 in another epic. 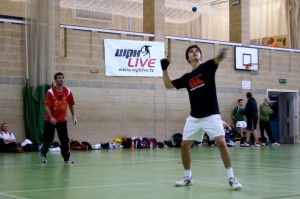 The bottom half of the draw was dominated by GAA stalwart and instigator of handball at St Paul’s Academy in Greenwich, Niall McCann.  He exhibited great technique to win through to the final with relative ease.  Here he faced the no.3 seed Dean Corrigan who had amazed Richard Price with his power and precision in the semi. Dean, fresh from Ireland, went on to use his superb skill, rooted in 4-wall experience, to dispatch McCann in the final with relative ease. With finals being played best of three, he won in straight sets 15-2, 15-2.  He also won the prize for hardest hitting of day, frequently producing a cracking sound with his Irish whip which caused the crowds to gather round in awe. 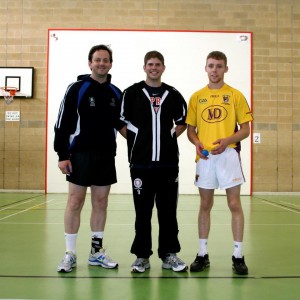 Notable challenger mentions go to Abs Bhatacharya who made it to the quarters in his first handball event and John Walter who won the plate.

The U-18 division was played as a doubles competition this year and despite a few last minute drop outs, the field was big enough to ensure play continued the whole day. Three pairs really shined in this inaugural grade: Home pair Shah & Kotetcha from Merchant Taylors’ School went on a winning streak until unfortunately Kotetcha had to withdraw with injury. Fionn O’Sullivan & Rishil Patel scored the highest points in the round-robin with Tessa Mills and Sophie Tomkinson from Eastbourne School just behind. The latter two pairs then fought it out in an incredibly tight final which was full of great athleticism and dexterity, although the boys eventually closed out the girls 15-8, 15-12.  Sophie Tomkinson did especially well considering her painfully bruised hand and Fionn and Rishil’s hardwork on the handball court over the past few months was repaid with a tasty golden trophy. 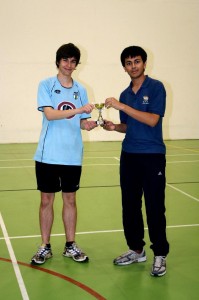 Fionn O’Sullivan & Rishal Patel – proud winners of the U18 grade

With Kerry White away in New York, the Women’s tournament was wide open and indeed there were a few big upsets.  Marianne Rees, England’s no.2 ranked player, finished top of the group winning all her matches.  However an out of practice Ashley Lumbard (no.3) lost to both Tessa Mills – one of the UK’s brightest young talents and Kathleen Briedenhann who was running on a high after winning the ladies’ challenger grade at the Irish Open earlier this year.  Kathleen also went on to beat Tessa and so she and Marianne faced off in an epic final in front of a delighted crowd.

Marianne took the first set comfortably 15-4 but Kathleen came out of the blocks forcefully in the second.  After much back and forthing and some really exceptional rallies, she clawed a set back by winning 15-12.  It was then Marianne’s turn to conquer her mental demons and her experience on the international circuit showed as remained cool and calm and kept to her game to win the third set tie-breaker 11-2. 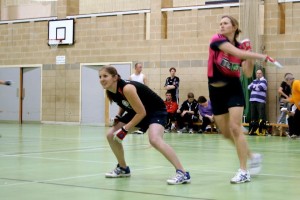 The final grade was the Pro Grade which featured many of England’s top players and also two of Belgium’s finest in the form of the hard-hitter Gregory Van Impe and Wouter Wielandt, the master tactician.

There were two groups of round-robins. Group 1 was won comfortably by top seed and UK no.1 Daniel Grant but 2nd place was not so clean cut.  Dan Tristao, playing in his first Open, did himself proud but was outplayed by both Wouter and England team newcomer Luke Thomson.  These two staged off against one another to determine second place and the game was a true epic with Luke facing match point before his speed and natural skill enabled him to dig deep and win 21-20.

Group 2 was equally hard fought. No.2 seed and England Captain Ady Lee finished top but second place was a great tussle between Van Impe, Andy Pringle and Gareth Price, all of whom won 2 matches before losing to one another in handball results-triangle.  The final placings therefore came down to total points accumulated and it was Van Impe who won through with 67 points, barely ahead of Price and Pringle on 64 and 63 respectively.

The top 2 from each group went through to the semi-finals, while the others fought it out in a plate competition, the final of which was played between Price and Wielandt with the Belgian coming through to his first Open accolade and rapturous applause.

The main draw semis were both close affairs.  Grant beat Van Impe in straight sets but the hard hitting Belgian had him worried with excellent serve positioning and smart kill shots, however Grant maintained a cool head and staged a comeback in both sets to come out on top.  The second semi was a real nail-biter with veteran international, Lee, playing rookie England international, Thomson.  Lee showed his presence of mind in the first set to take it 15-8, but Luke fought back in the second, increasing his pace and playing more high risk shots.  The England Captain was taken by surprise and after what seemed like an eternity of to and fros, Thomson won the second to 12.  It was therefore all down to the third set tie breaker and it was nip and tuck all the way.  It was only at the end when Luke began to get a little tired and the Ady dug deep into his smart and natural game that the veteran began to take charge. He dealt Luke the final blow with a trademark down-the-line killer to win 11-8.

The final was filmed for WPH Live broadcast and both Lee and Grant (who are England’s no.1 doubles pair) began to prepare themselves for a hard-hitting ordeal.  Both knew each other’s game and both came out hard and fast – each looking for their first UK Singles Open title.  Lee, perhaps a little tired from his semi, was just a half-step behind as the game began. Grant, who had recently spent a month in the US playing 3-Wall, took an early lead which quickly became unassailable.  His powerful serving on the fast courts, combined with well placed volleys frustrated Lee and despite some moments of brilliance, Grant came through comfortably winning 15-2, 15-4. 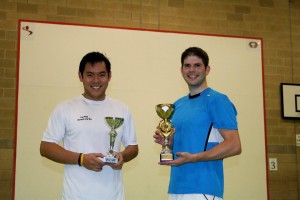 Players then withdrew for a well earned pint and some super spicy BP Salad!

This year’s tournament was a great success and many thanks go to the organisers who worked hard to bring it all together over the past few months, Merchant Taylors’ for hosting the tournament and the official dinner and to the OMT society who backed the event and are fully behind the growth of handball in the UK.  Thanks also to our international tournament sponsors WPH Live and our England player sponsors, Ektelon.  We look forward to the UK Doubles Open and a bigger and better Singles Open next year.