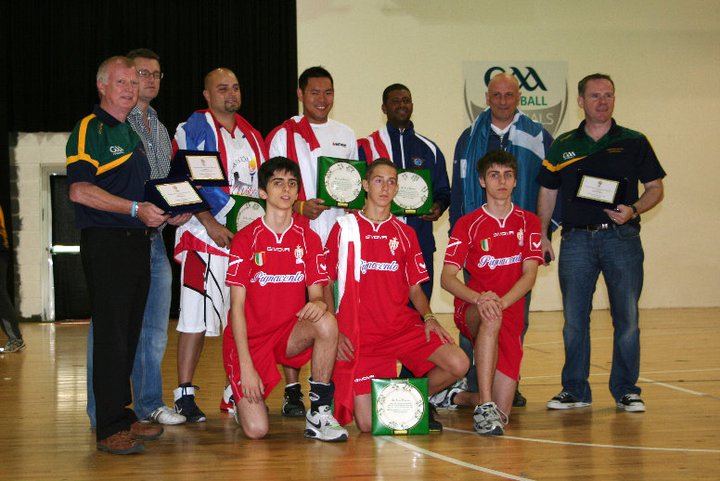 Team England has returned home after another successful trip to the Irish National 1-Wall Handball Championships. Two players made their international debuts, while a third ensured that the team continued its record of always returning home with some silverware.

This is the fourth successive year that English players have travelled across the Irish Sea to compete, but there was a change to previous years’ programme this year. On the day before the championships started, the GAA hosted an international challenge between teams from Ireland, England, Puerto Rico and the USA.

England’s top pair was made up of regulars Ady Lee and Emmalina Thompsell, while the second pair saw Andy Pringle and National Rugby Fives Schoolgirl champion Tessa Mills represent England for the first time. Neither pair won their opening matches, but considering the quality of opposition they faced – every one of their opponents was a current or former National or World champion – they put up a fine performance, and were far from out of their depth in such illustrious company.

Come the championships themselves, England’s players decided to test themselves by playing in tough groups – but all did well. Both Tessa and Dan Murray reached Plate finals, but without doubt the weekend’s best performance came from Ladies National Winchester Fives champion Kathleen Briedenhann.

Playing in her first ever handball competition, she entered the Ladies Challenger grade, which is designed to encourage relative beginners. Her performance improved from game to game, as she comfortably beat her opponents in the early rounds; and, while she was tested further in the later rounds, she went on to win the title, making this the third year on the trot that an English girl has appeared in the final of this event – and the second time that an English girl has won, after Jess Lumbard won the title in 2009.

Two programmes of highlights from the event will be shown on Irish TV channel TG4 in September, and we’ll have full details of those as soon as they are available.

You can get a taste of the action as it happened by looking over our Twitter feed: