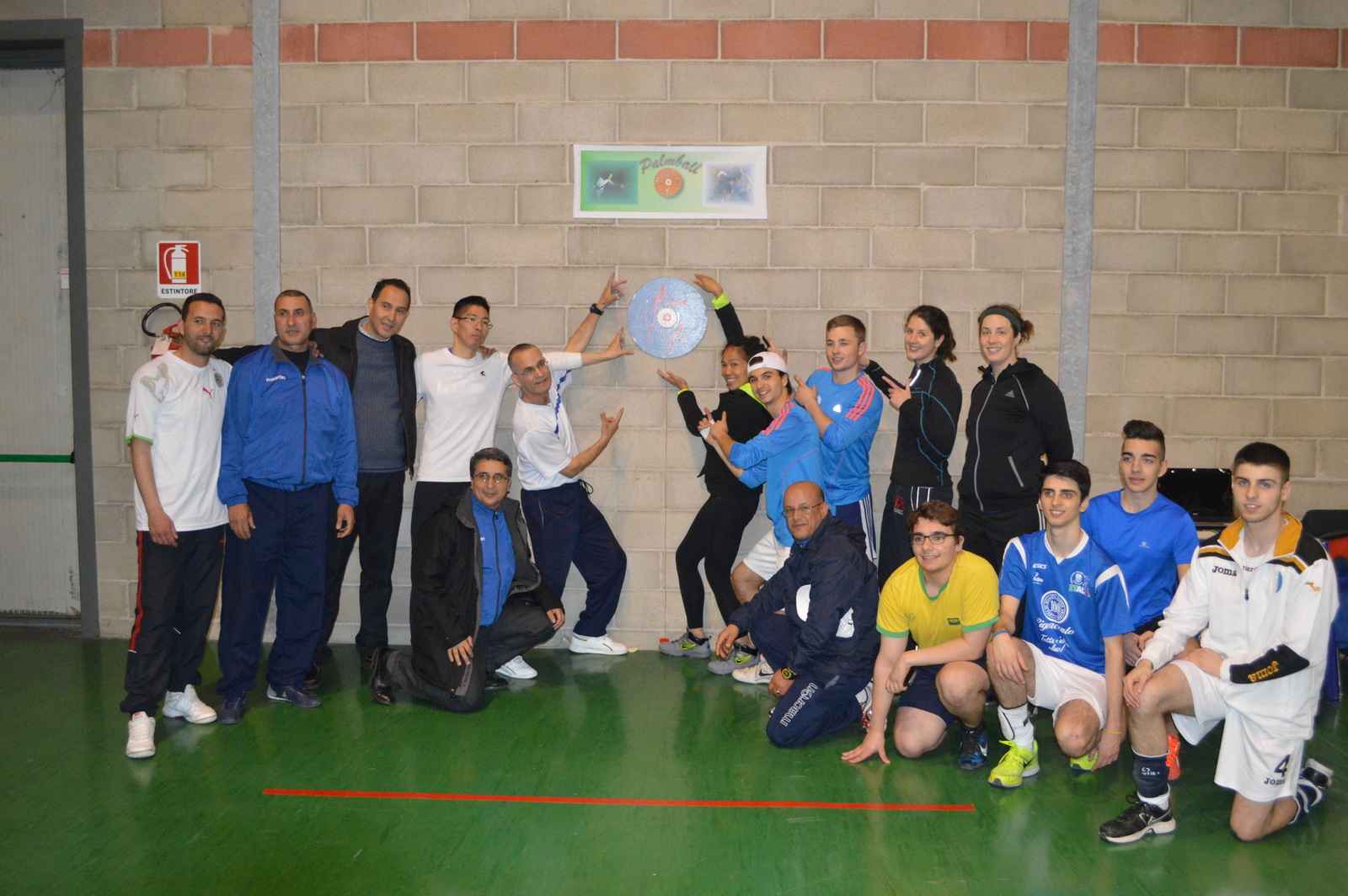 Medals all round for Team GB

A group of 6 Team GB players descended on the quaint little town of Nizza Monferratto over the Easter Bank holiday weekend to compete in the first Italian Open tournament. 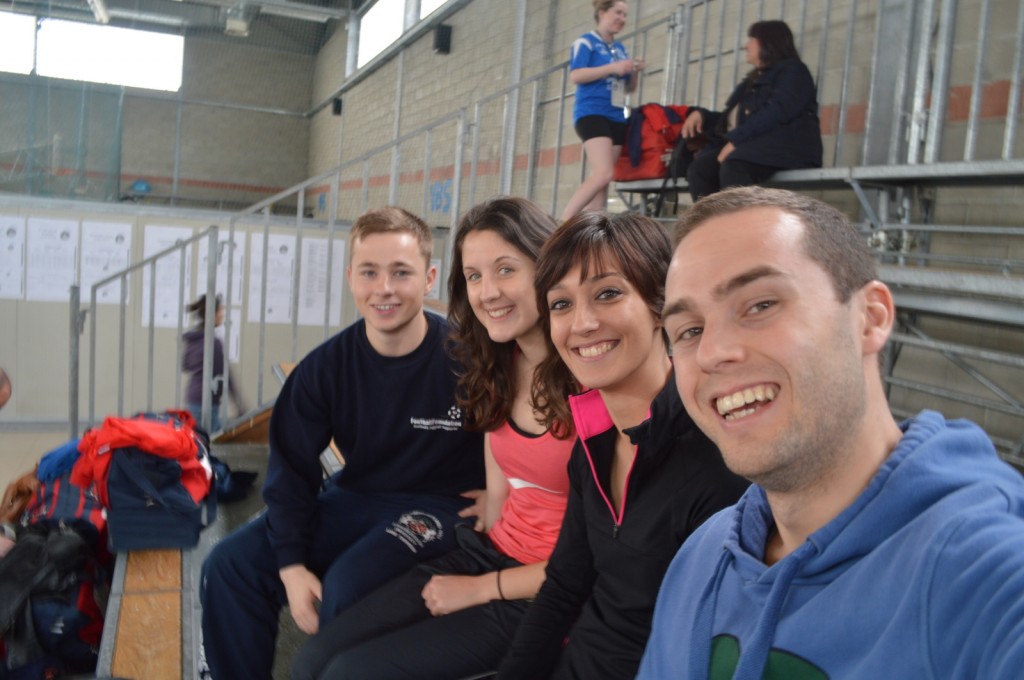 The weekend got off to a usual Team GB tournament start, with Luke “Tekkers” Thomson realising he had booked the wrong flight, then tried to smuggle liquid through security and finally having to run for the gates.

However the team finally arrived in Milan in one piece, and picked up the hire car as Alex Steel steered us through the country roads of Asti like a pro rally driver.

We settled into our hotel, met our fellow competitors from the US, Canada and Holland, had a little practice on the courts and retired to bed after a pizza and (quite a bit of) wine, ready for the tournament

The first day saw the majority of the singles matches on show. In the men’s draw there were 3 groups of 3 with the top two from each group forming 2 groups of 3 and the winners of these going through to the final. The ladies open, represented by Sarah Greasley and Alexandra Steele consisted of two groups with the top 2 players from each going through to a semi-finals.

All 3 GB men were in placed in separate groups with one American and one Italian player. Luke Stradwick had many moments this weekend which lived up to his nickname “Le Tissier” and the first came against the young Italian, Simone Corsi. After losing to Vlad Klim of the USA 15-3 in the first match, the next match was the decider to who was going to progress to the second round. The Italian started strongly, taking a 6-12 lead but then Le Tissier came out in full force and turned the game around to 15-13.

Dan Tristao, off the back of a long trip to join us on the day of the tournament, shook off his tiredness and got off to a decent start, losing to Tony Alberto of the USA but comfortably beating the Italian opponent, Simone Maschio 15-1 to also come 2nd in his group.

Luke Thomson also suffered a similar fate in the first round, losing to the number 1 seed from the US, Han Lin 6-15 but comfortably seeing off Yuri Trentin 15-7.

In the second round Luke Stradwick had a tough group with Han Lin and Tony Alberto from the USA and Luke and Dan were placed in a group with Vlad Klym.

Not expecting to get a result against the two Americans, Luke Stradwick was surprised when he found himself 12-0 in the lead against Tony in his first game, but in true Le Tissier style he collapsed to a 13-15 defeat. Tired and deflated, Han Lin powered past 4-15 against the Brit in the other game and then beat Tony Alberto 15-7 to make the final. 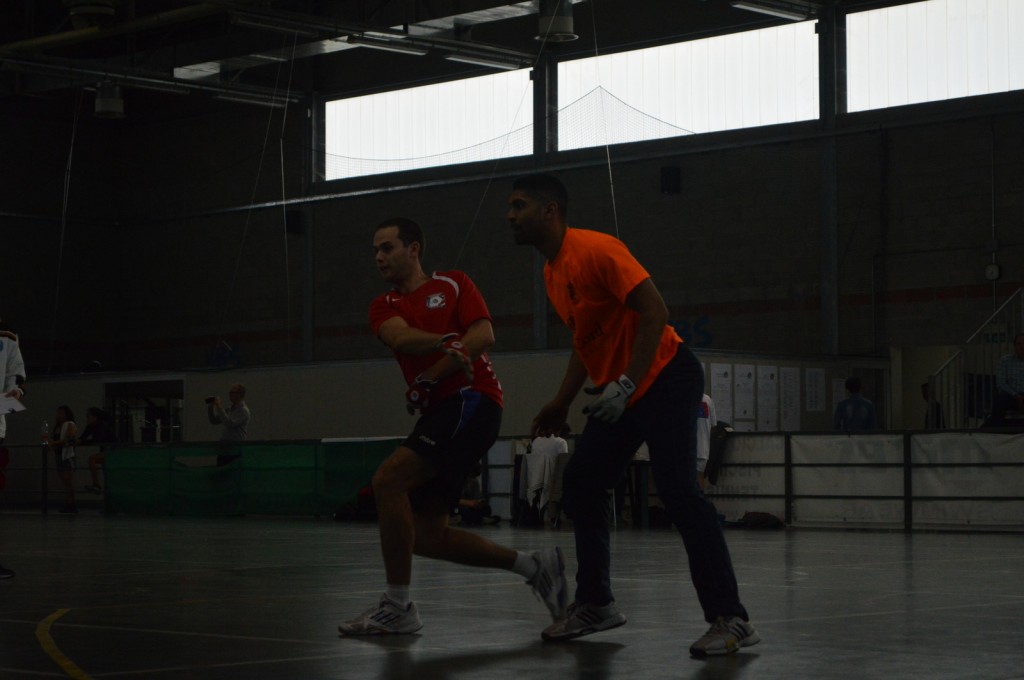 Luke “Le Tissier” Stradwick on fire for almost the whole match. So close, Luke. So close.

In the other group, Luke Thomson lost to an in-form Vlad Klym 3-15 before Team GB produced one of the shocks of the tournament.  Dan Tristao took to the court against Vlad and produced some incredible shots to win the game comfortably at 15-9. Dan only needed 10 points against Luke Thomson in the second game to go through to the final but completed the clean sweep in the pool, winning 15-11 against his fellow countryman.

3rd/4th place was fought between Vlad and Tony from the USA, with Vlad taking the game 21-12. After this game, Dan Tristao stepped on court, roared on by the support of Team GB to take on Han Lin. Everyone knew that this was going to be a tough game and Han was on top form in the final, with his serve and volley getting the scoreboard quickly ticking over. After a valiant effort by Dan Tristao, Han took the final 21-1. 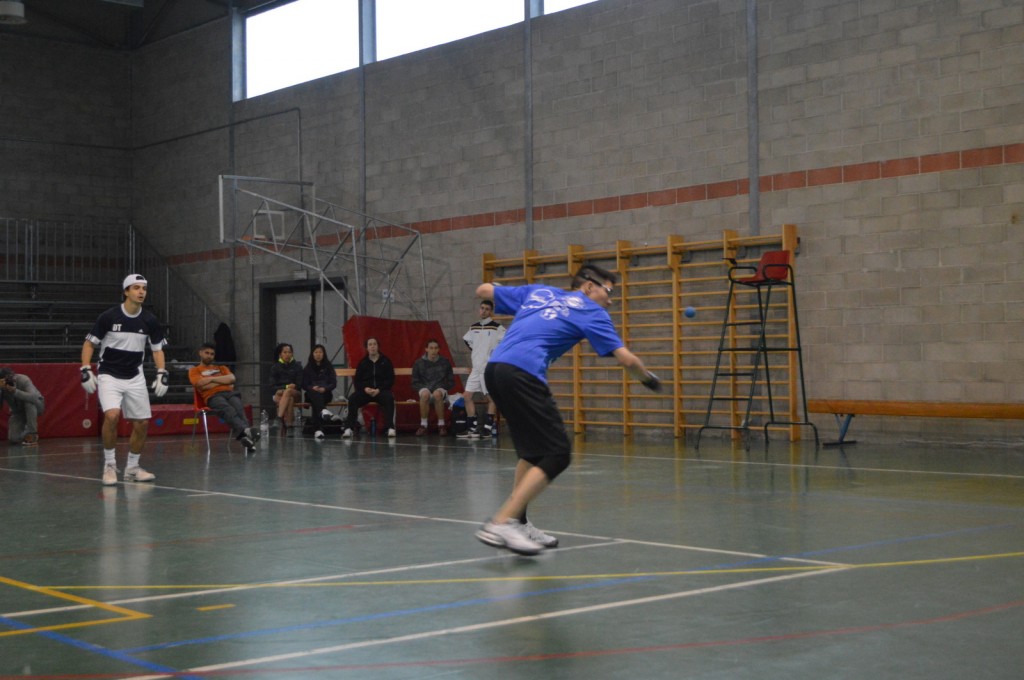 Tristao getting a lesson from World Beater Han

The women’s Open was a highly competitive, with top players from USA, Canada, Holland and Italy competing alongside Team GB. The two GB ladies were given a tough draw as they were put into the same group with two American players, Amy Lin and Jenny Ng.  Knowing that the top two players from the group progressed to the semi-final stages the ladies put on a good show against the American’s but were out powered by the more experienced players. Alexandra Steel lost 4-15, 2-15 in her games and Sarah lost 2-15, 9-15 but both played really good Wallball and improved with each game played. In the round robin group stages the girls also faced each other, with Sarah pulling off a comprehensive 15-2 victory over her fellow teammate. 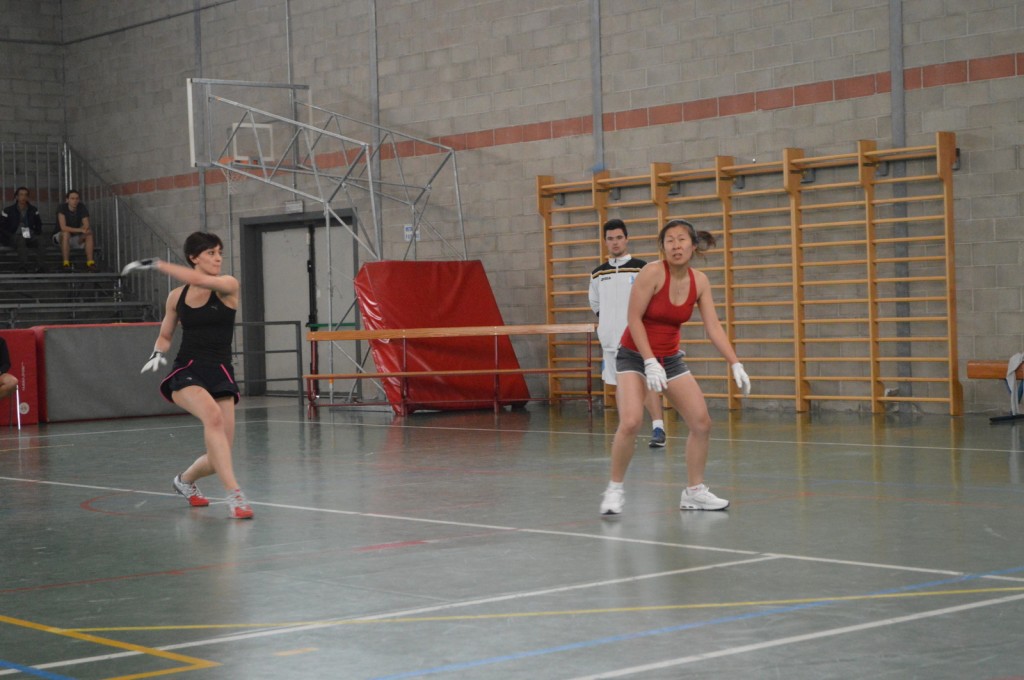 The two American players went through to the semi-finals along with Miranda Scheffer (Holland) and Samantha England (Canada). Miranda eased through her semi-final 15-6 but the other side of the draw provided a nail-biting game, with Anna Lin (USA) edging out the Canadian Samantha England 15-14. Miranda continued her dominance in the European competitions defeating Amy Lin in the final 21-7 and taking the Women’s Open crown.

Saturday was dedicated to the doubles competition. Dan Tristao teamed up with Luke Thomson which left Luke Stradwick teaming up with American Vlad Klym. Luke and Vlad had two Italian pairs in their group, the first was despatched with relative ease (15-1) but the second match against Corsi/Maschio was somewhat more difficult. The Italians were roared on by the home support with every point they won and despite Luke and Vlad taking a 12-6 lead, the Italians rallied to take a shock victory 12-15, leaving Luke and Vlad 2nd in their group knowing they would have to play the winners from the other group in the semi-finals.

Luke and Dan had played together in Columbia in 2013 and the experience they gained there was evident in this tournament. Their group consisted of an Italian pair and the American. They shrugged off the Italians 15-2 but produced a good game with the American’s and lost 8-15 despite some breath-taking rallies. Despite coming 2nd in their group, they arguably had an easier fixture in the semi-finals due to the Italian pair topping the other group.

In the semi-finals, Dan and Luke swept past the Italians with relative ease 15-3. Luke and Vlad had it all to do against the American’s if they wanted to make the final, but the Americans proved too strong and took the game 15-4. They would face Luke and Dan for the 2nd time in the competition in the final.

3rd/4th place was a re-match from the group stages and Luke/Vlad made no mistake this time, beating the Italians 15-12 and taking 3rd place.

Using the experience gathered from the group stages, Dan and Luke played a smart game against the American’s in the final, targeting Tony Alberto and producing some remarkable kill shots at the same time. Epic rallies ensued, with the Team GB pair having a good understanding of one another’s play. The game was neck and neck throughout with Team GB taking the lead at around 16-15. However the experience of the American’s came through in the end and they won the final 21-18. Despite the loss, the two guys were upbeat and can hold their heads high – they demonstrated that they can hold their own against some of the top players in the game and this is a partnership that will continue to flourish in the future with each competition. 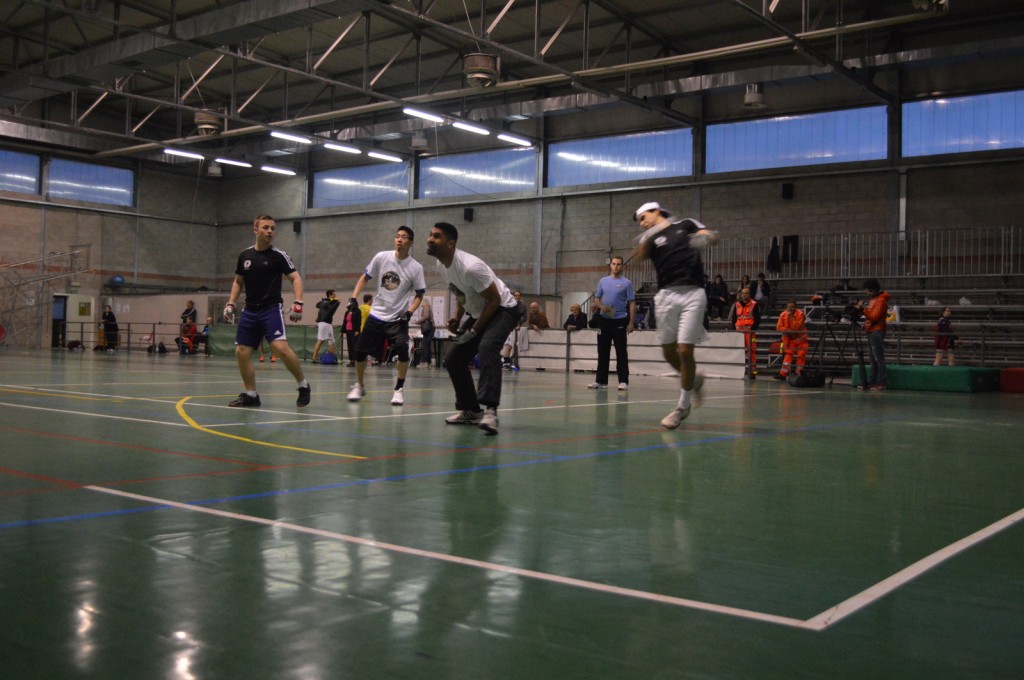 Superb play from Tekkers and Tristao to almost steal the title.

Sarah and Alex teamed up to be the only Team GB pair in the Women’s doubles competition. The preliminary round saw them beat an Italian pair 15-9 but then lost to the USA/Italian pair of Garbarino/Lin 5-15. They ended up 2nd in the preliminary group which meant they qualified for the final phase of the competition alongside an American pair and a Dutch/Canadian partnership. The girls fought valiantly in the final phase, but the other pairs were just too strong and they succumbed to defeats of 3-15, 2-15 and 3-15. The ladies grew into the competition with each game and came 4th overall. They both gained a great amount of experience from the competition which will serve them well for future tournaments. 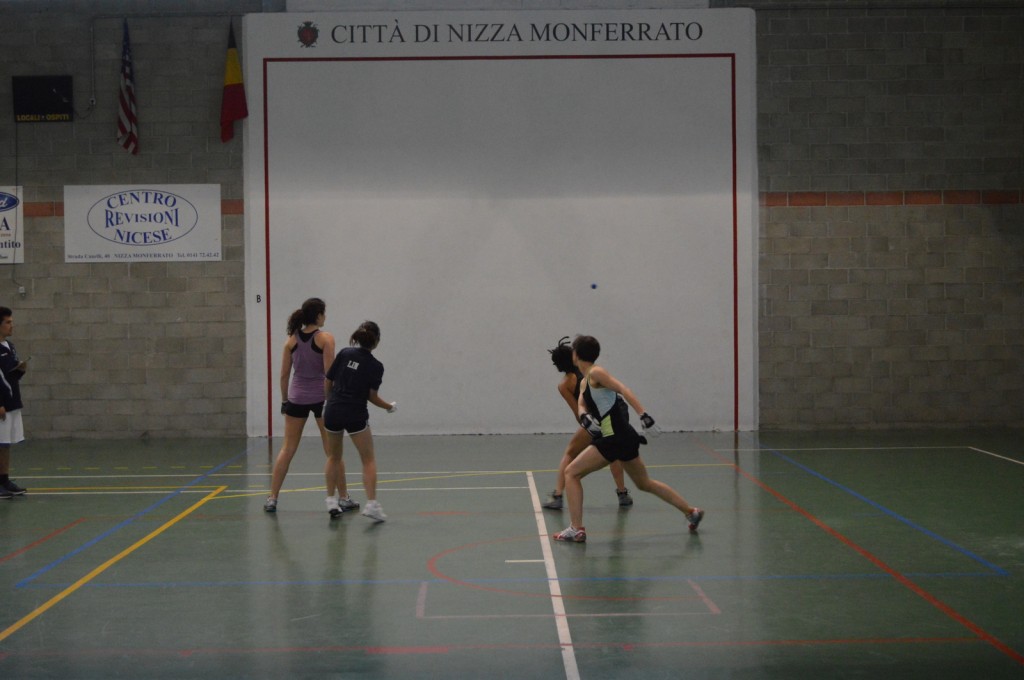 An exciting final was played between Kong/Ng (USA) and Scheffer/England (Holland/Canada) which was a great spectacle for the women’s game.  Despite being close throughout, the USA pair were too strong in the end and took the title with a 21-18 win.

The Algerian game of Palmball was demonstrated at the Italian Open. The game consists of hitting a soft tennis ball  against a target the size of a dartboard with alternate hands from 2 meters as many times as possible in a minute.  A men’s and women’s competition was formed and Team GB took dominance from the outset. Sarah Greasley claimed the women’s title with a score of 23 and Dan Tristao, double finalist in the Wallball, added a 3rd final to his name and was pipped to the title by the man who created the game nearly 40 years ago – not bad for someone who had only played the game for the first time! Thank you to the Algerian team for coming and demonstrating their game and UK Wallball wishes them the best of luck in the future.

After a packed weekend of Wallball in Nizza Monferrato, Team GB took home the following medals:

UK Wallball would like to thank Maurizio Trentin and the rest of the organisational team for the hospitality shown over the weekend. The hosts put on a well organised tournament and went above and beyond what was expected on them – the whole GB Team were made to feel very welcomed. We are looking forward to seeing the Italian team in future tournaments and coming back to Nizza Monferrato in 2015! 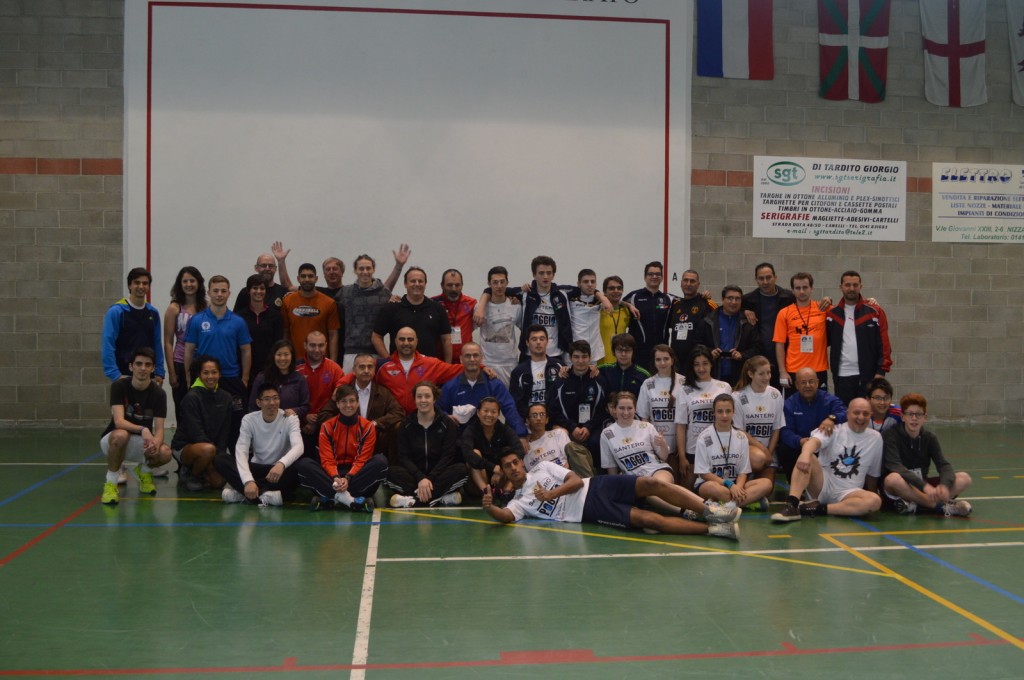 A great weekend. Thank you Italy!