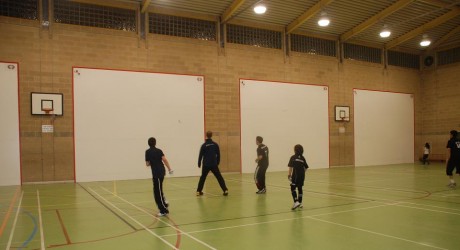 Th UK Wallball centre of excellence was officially opened at Merchant Taylors School (MTS), Northwood, to a large audience of sports professionals, teachers and media from the Hertfordshire region.

Over 100 kids played wallball through the day, coached by MTS Alumni and UK Wallball squad members Dan Grant and Gareth Price, on the 4 indoor, championship spec courts. Many of these kids were so enthused they stayed late after school for the official opening with a speech from the Headmaster, and to pick up some more tips from a top-class doubles game featuring Grant and Price, joined by and Pete Cohen and England Captain Adrian Lee.

The Centre of Excellence will be a training venue for the highly successful national squads, and will be home to teams from MTS as well as provide a training base for schools from the local area. It will also host this year’s UK Open Doubles, and will possibly welcome junior athletes from across the continent for the Euro 2013 Junior Handball championships.