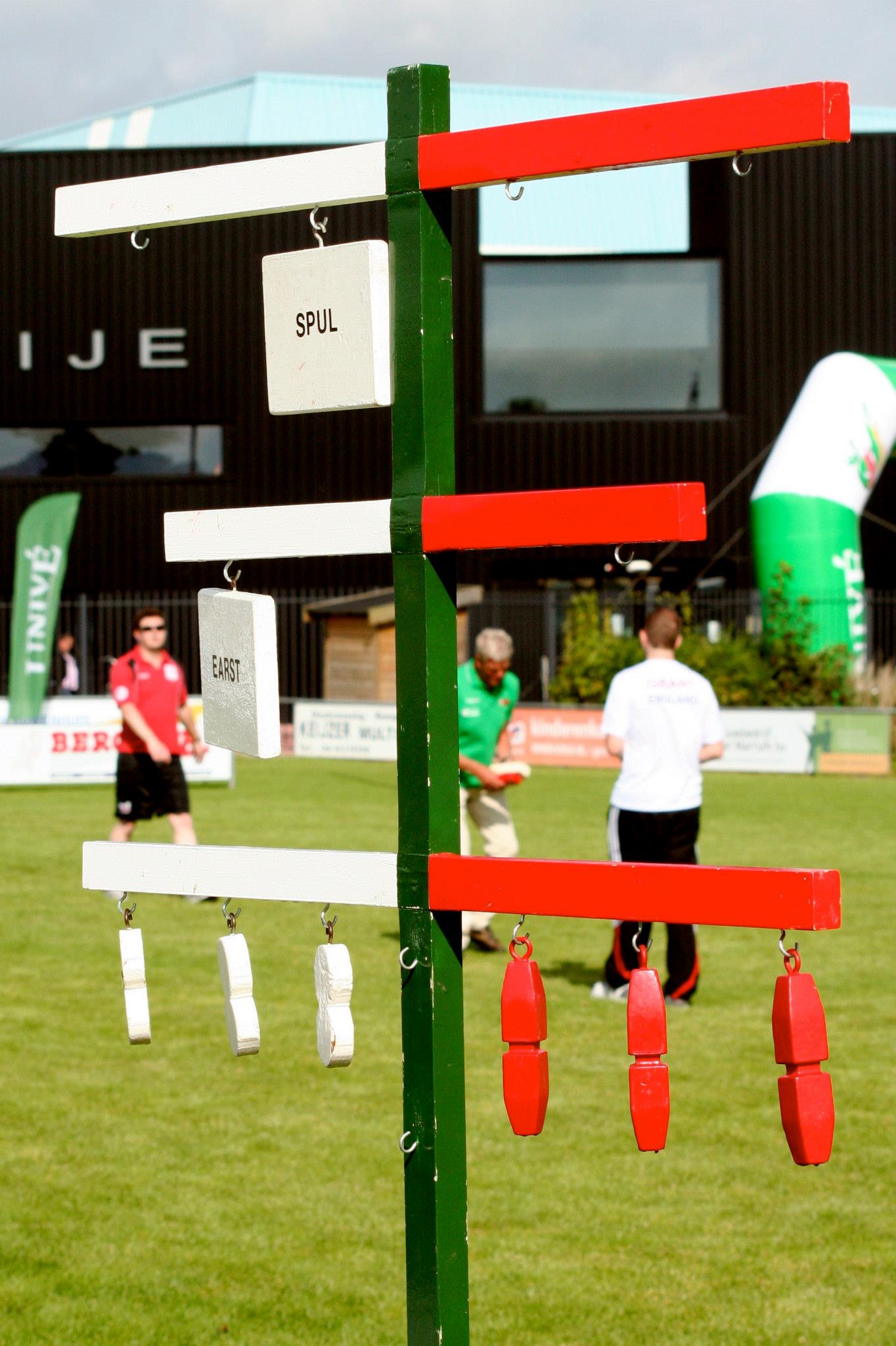 Team England returned from the CIJB World Handball Championships in Franeker, Holland, with a host of new friends and a growing reputation in the international arena – if not a great deal of success in the competition itself.

The championships featured four games, but England were concentrating on 1-Wall handball, as they aimed to defend the title they had won two years ago in Valencia, Spain; though realistically with Puerto Rico in the mix and on our side of the draw, were targeting a bronze medal. 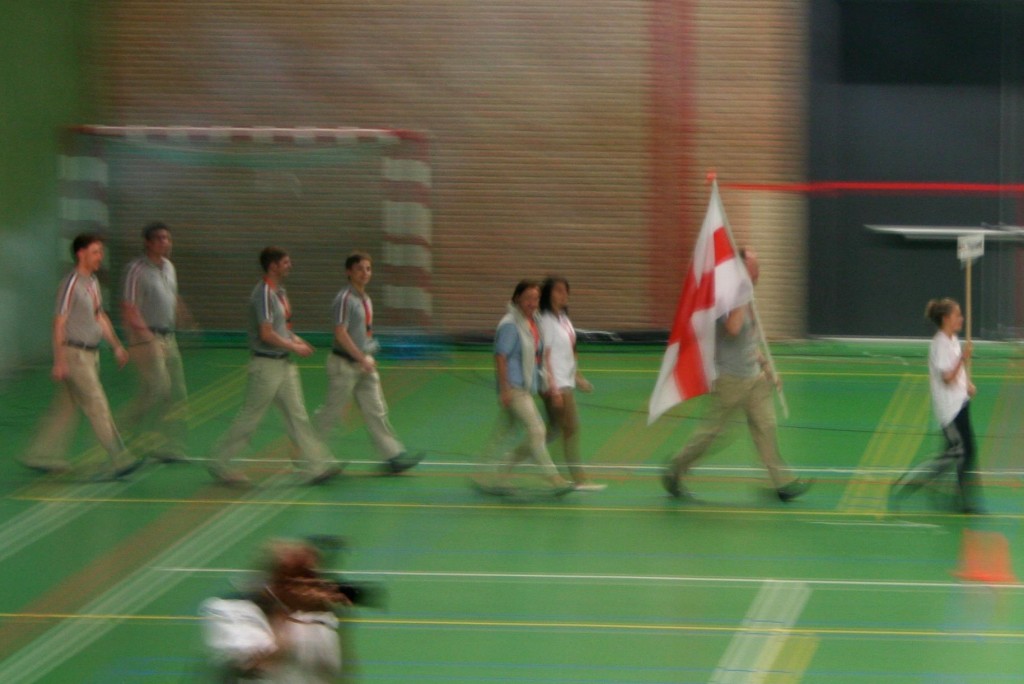 The England Team march out at the Opening Ceremony. Price and White at the back. Thomson and Grant in the middle. Mills and Carling at the front. And Andy Pringle carrying the flag.

First, though, they had to tackle the International Game and Kaatsen, a game only played in the northern Dutch province of Friesland. Both are field games, played on large pitches and reward the ability to hit the ball – a shaven tennis ball in the International game and something like a smaller Rugby Fives ball in Kaatsen – a very long way.

Sadly, this is a skill the English court-game specialists struggle to master, and matters were not helped by having to face very strong teams in their opening encounters: defending champions Spain in the International Game and Holland in Kaatsen.

The International Game is perhaps best described as five-a-side tennis, with each team defending a half of the pitch and trying to either prevent the ball being returned or hit the ball straight out of the back of the court – an instant winning shot. The game is scored similarly to tennis, with much of the emphasis on serving and returning serve.

Against Spain, considering none of the team (Dan Grant, Gareth Price, Peter White, Luke Thomson and Andy Pringle) had played the sport competitively for two years, England put in a decent performance; and, although they lost 6-2, each individual game was close.

The second game in the round-robin format was against Mexico, with England again going down 6-2, but the team saved the best till last – a match with Ecuador. With England’s confidence growing and tactics improving all the time, it was a tremendously close match that went to a deciding game, with the teams tied at 5-5. Sadly, England were receiving and Ecuador’s best server stepped up – despite England’s protests that he was taking his turn out of order. Unable to deal with his good shots, England lost the game, but went away feeling sure that, with more experience, they could become a force in this game.

The team’s Kaatsen campaign ran a similar course, opening with a heavy loss to Holland, the only country that regularly plays this game – a three-a-side game that features elements of tennis and cricket, with each team trying to set marks that they defend against their opponents.

This game took place against an embarrassing background, as the English team tried to clear up any possible offence caused by one player’s comments that he thought Kaatsen was ‘boring’. Sadly, he realised too late that the friendly young man he had been chatting to while watching a demonstration match the previous day was a newspaper journalist, who unsympathetically published these comments on the day the competition started! 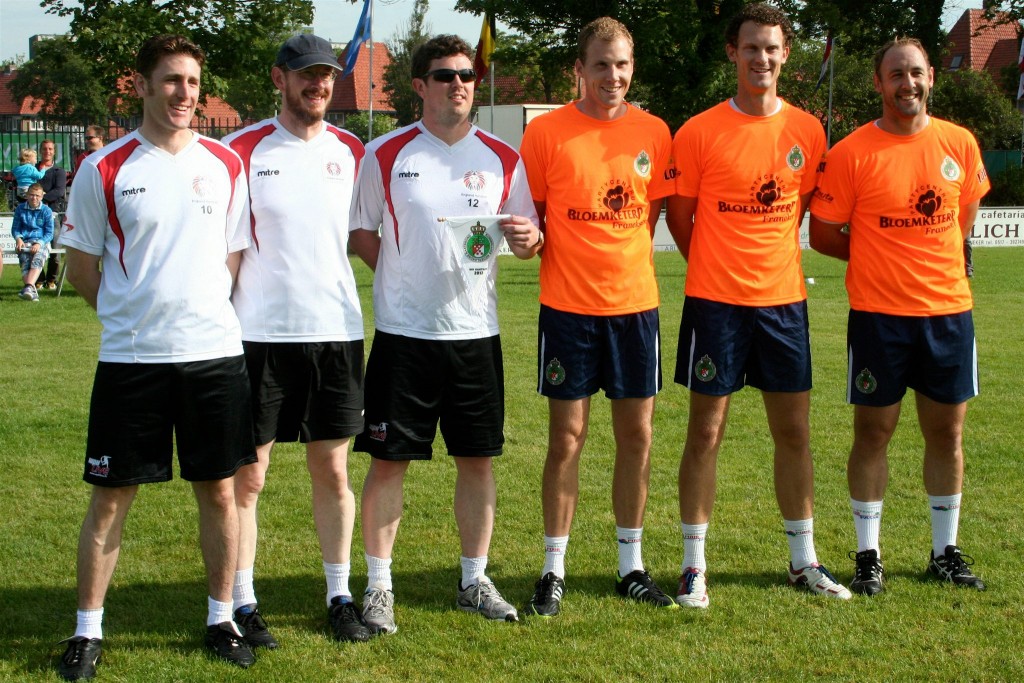 Pringle, Price & White take on the Dutch in Kaatsen. Price was the only man in the whole tournament to ace them!

Happily, England’s team (Price, White and Pringle) responded in the best way in their second game, recording a win against Venezuala, but they couldn’t repeat the feat in their final match against Argentina. Although England went 4-0 up, the Argentinians picked up their game at the same time as England’s serving fell to pieces, and England eventually lost 6-4. Mind you, at least the team were happy to be quoted that the game wasn’t as boring as they had first thought.

At the same time, England’s ladies – Tessa Mills and Wendy Carling – were also trying their hand at Kaatsen; and, although they played their hearts out in an unfamiliar game, they weren’t able to score a win. 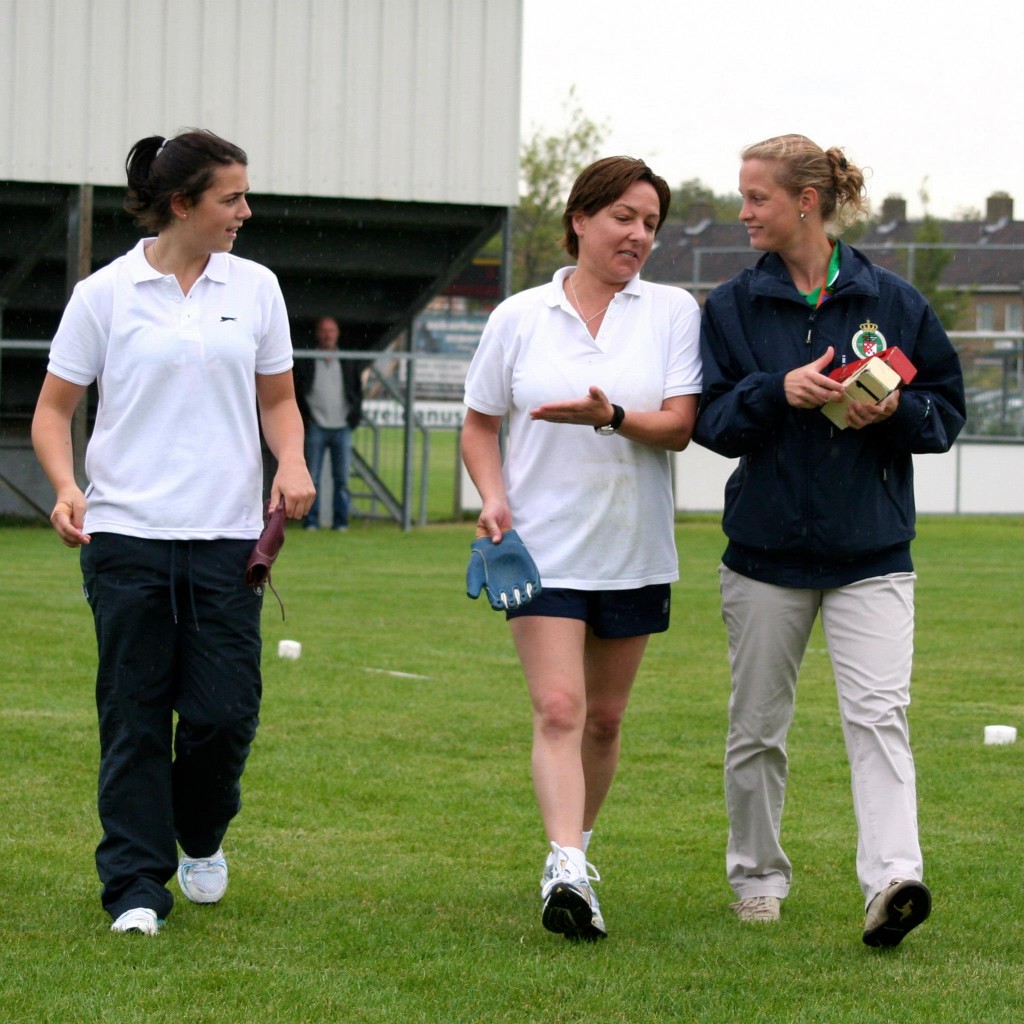 Instead, both the men’s and ladies’ teams were concentrating on the 1-Wall, and the men (Grant, Thomson and White) opened up with a 100% record in the group stages, beating Argentina, Belgium and Peru. The format was doubles-only, best-of-three games, and it was close stuff all the way: the wins against Argentina and Belgium only came in the tie-breaker third game.

Worse, though, as the team found out in these opening games – and a huge, hand-shaped bruise on the back of Pete’s thigh showed – neither the players nor the referees seemed familiar with some important details of the rules, in particular those dealing with screening and blocking.  The UKWBA has since spoken to the CIJB about such matters.

This was to haunt the team in their next match – a quarter-final against Spain, the team they had beaten in the 2010 final. With England struggling to contain their indignation at what they saw as unpunished infringements by their opponents, it soon turned into a bad-tempered encounter. Arguably, England were the better handball players, with a wider variety of shots and better tactics, but the situation got the better of them and they ended up losing in two games. 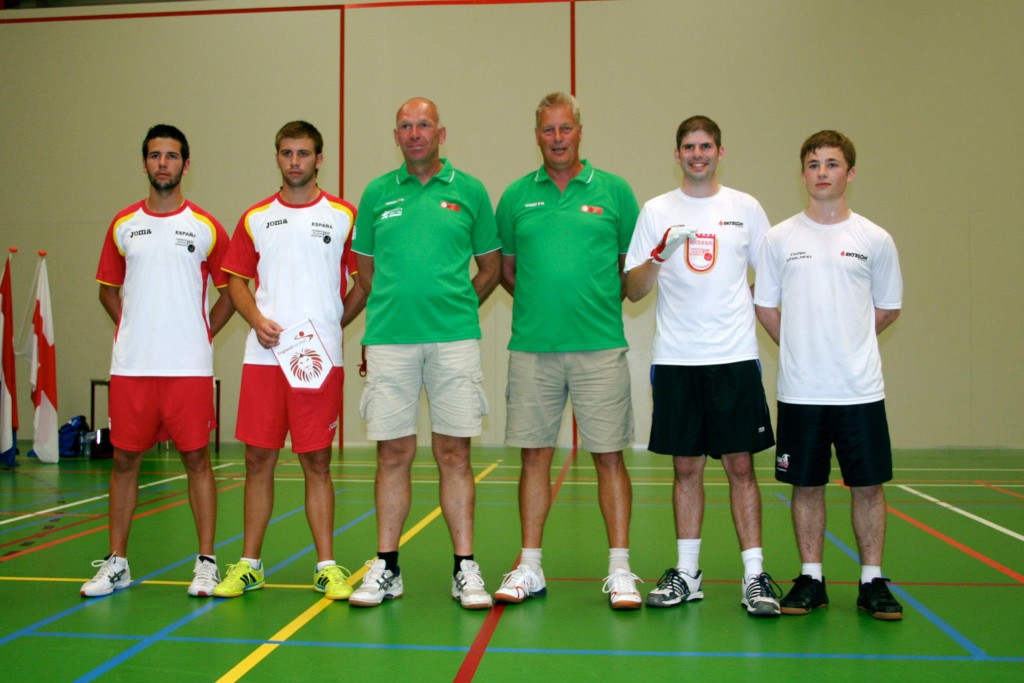 Grant & Thomson take on Spain. Thomson earning his first cap this tournament! Sadly, this was one of the last pleasant moments in a very unsporting match.

It was a disappointing end to a campaign that had promised much, and to rub salt into the team’s wounds, the Belgians (who lost to England in the group stages) went on to claim third place with a win against Spain in the bronze medal play-off match.

By contrast to their male colleagues, England’s ladies were rather less experienced in international competition and that showed. However, while they lost all their matches, there were many crumbs of comfort: Wendy and Tessa improved throughout and have learned much from their time in Holland. They were unfortunate to lose to Italy in a tie-breaker, while the eventual winners – Puerto Rico – took the time to give them a ‘masterclass’. 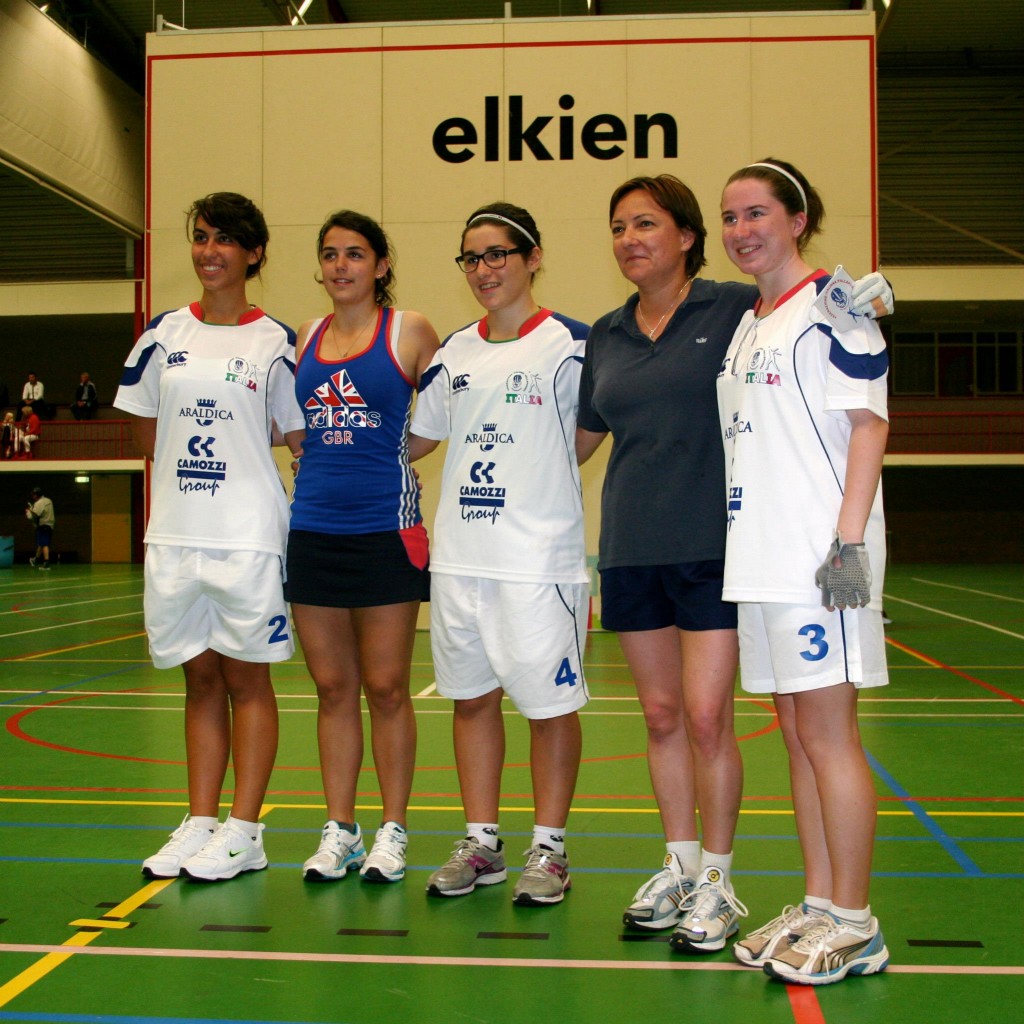 Both Mills and Carling earned their first caps this tour and did remarkably well considering the standard of some of the players they faced.

England’s last on-field action of the week was Llargues, a similar game to Kaatsen, but in which two good servers can win the day for their team: a serve straight over the back of the court is an instant, unanswerable, point for the serving side. Sadly, England came up against two strong-serving teams – Belgium and Colombia – and they could only watch as serve after wind-assisted serve sailed over their heads. 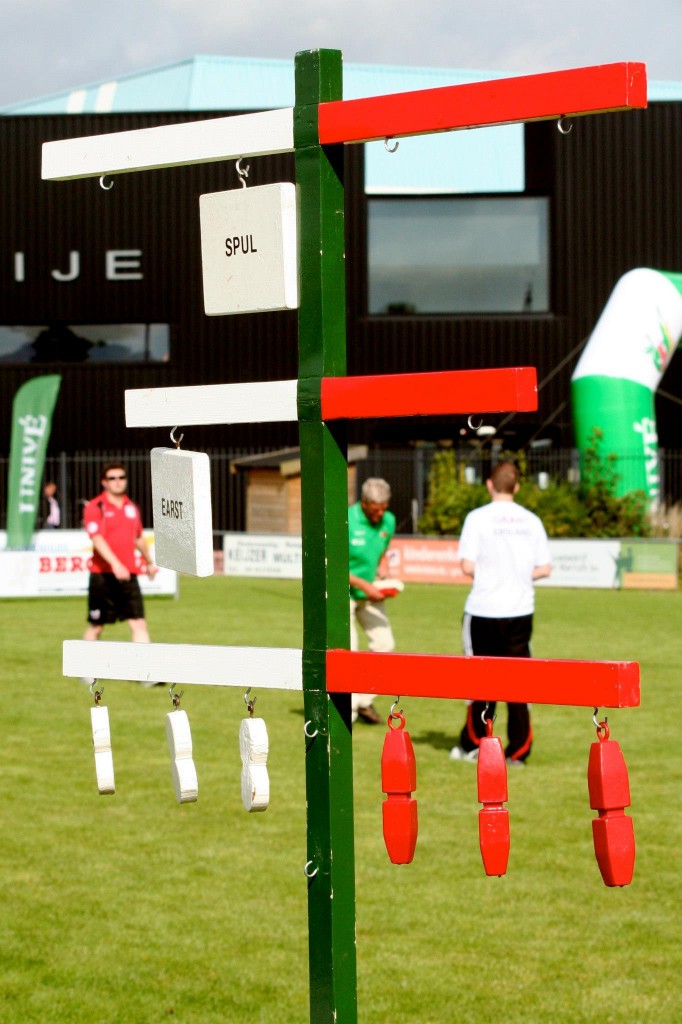 It all looked so good…

Overall, then, it was an occasionally frustrating week for the team, but one which will teach them much about future international competition.

It has also taught the international competition much about the English sense of humour as the team created a new rallying cry. True to form, this new call was the result of a mistake: mis-hearing the French/Belgian teams’ cry of ‘Allez les gars’, which translates roughly as ‘Come on, lads.’

Believing they had heard them say ‘Allez à la gare’, the English now start all their matches – much to the confusion of their opponents – with a group cry of ‘To the Station!’.