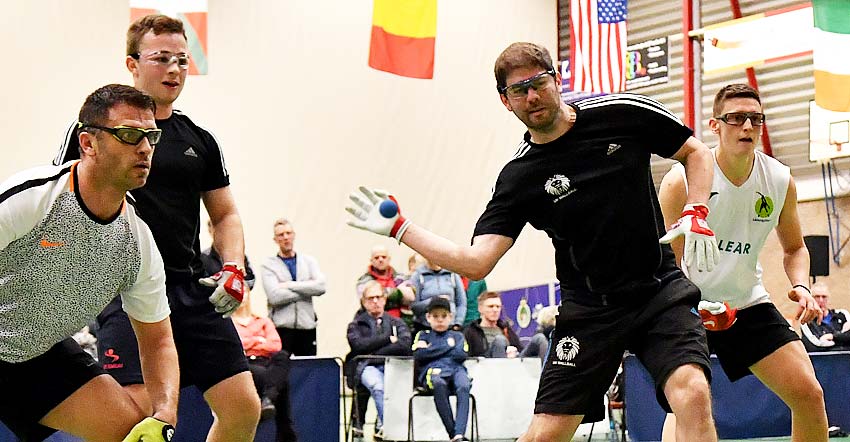 The 2019 Tiedema Dutch Open was a massive success for UK Wallballers, who claimed four gold medals, whilst sweeping the Men’s Doubles Events last weekend. A tough international field was brushed aside, as Dan Grant and Luke Thomson won their second Open title of the season. In the B doubles, Luke Stradwick and Colm Grace went unbeaten throughout the day, taking down six local Dutch pairings.

Grant and Thomson were handed a tough group and had to start the day against the reknowned Puerto Rican pair Wally Amaro and Herman Mendez. A 25-19 defeat ensued. However the London pair swiftly got their day back on track. Group victories followed against Basque and two Dutch pairs, as they started to show their true form. In the semi-final, they lay down a marker against Mikel Balderrain and Vincent Pozzebon, with a clinical 25-16 victory.

The final opponents were Sebastien Potiez (BEL) and Sacha Kruithof (SPA), the current tour number one doubles and singles ranked players, respectively- a daunting task for the Brits. However, once they found their rhythm, it was clear they oozed confidence, helped by their victory at the Spanish Open last September. The tie started off nip and tuck, with points being traded, as both teams vied for a foothold in the game. Rallies were short and at 5-5, there was no separating them. Kruithof started to influence the game more and more at this point, using his power and athleticism to force Grant and Thomson around the court. As the first game entered the closing stages, something clicked for the Brits. Moving in to serve, Thomson held his position in the front-court, blocking out Potiez and turned a 14-18 deficit into a 22-19 lead. The remaining rallies were close and tense, with the standard reaching impressive levels. Grant finished off the game with a clever shot, which left Kruithof sprawled across the floor. After a long delay, with the final shot being challenged, the ball was called ‘up’ and UK were one game to the good.

The second game was more convincing. An early lead of 12-6 was developed, with Grant staying high up the court and starting to dominate proceedings. His experience showed in the way he blocked out Kruithof and started picking his shots. The Spanish/Belgian opposition were unable to eat into the British lead and as the pressure began to show and tired bodies were stretched, mistakes crept in. The Brits showed a consistent defensive game, with no weaknesses and closed out the match with a 25-19 second game victory.

Luke Stradwick and Colm Grace entered the B grade as favourites, due to some near misses at the Spanish Open and Belgian Open recently, and they didn’t disappoint, in arriving at the final without dropping a game. There, they came up against talented Dutch duo Cornelis Tuinenga and Weird Baarda. It was a close start to the game, with both teams figuring out the other’s weaknesses. Eventually the London combo came good, with Stradwick’s accurate kills and Grace’s serve putting pressure on Baarda. The first game was won 21-15. In the second game, Grace and Stradwick exhibited their consistent power game and forced mistakes out of the Dutch pair. At 16-6, the game seemed wrapped up. A few nervy moments developed as they chased the final point, but in the end there was no doubt – a 21-17 victory and qualification for the Open grade at next month’s UK Open.

In Saturday’s singles events, Terry McElvaney and Ollie O’Sullivan were standout performers. McElvaney, recovering from a shoulder injury, was unfortunate to lose out to eventual B champion Mikel Balderrain in the semi-finals 21-16. Congratulations to Wally Amaro and Marrit Zeinstra, singles mens and womens champions respectively and also Anne Monfils who teamed up with Zeinstra to take the Womens doubles title. And of course, it was another memorable tournament for UK Wallball at the Franeker venue. Next up is the UK Open at Westway Sports Centre, London on February 23rd to 24th.