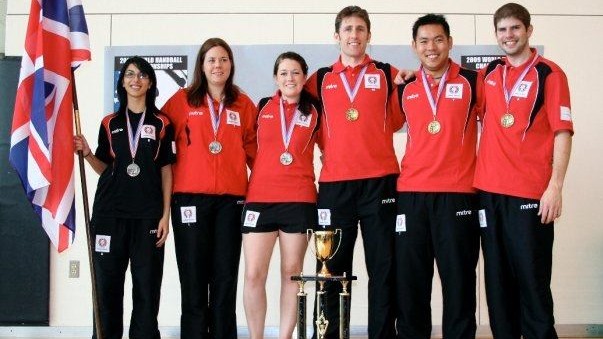 The largest number of English players ever to compete in the World Handball Championships have ensured that the 2009 event has been the most successful event ever for the country.

A total of 12 players competed – nine men and three women – and Team England had some truly impressive results: in the men’s C grade, for instance, Richard Price was a semi-finalist in both the One Wall Big Ball singles and (with partner Andy Pringle) doubles, while Luke Stradwick and Gareth Price reached the quarter-finals of the four-wall event. This latter effort was a particularly notable achievement, given that none of the English players had even set foot on a four-wall handball court, let alone played the game, before reaching Portland.

The most success, however, came in the Men’s B category: not only did Dan Grant reach the semi-final of the One Wall Big Ball singles, the doubles final was an all-English affair, with the Rugby Fives pairing of Ady Lee and Dan Grant defeating the Eton Fives pair of Pete White and (a sadly flu-ridden) Pete Cohen. This ensured England’s first ever piece of crystalware from a World Handball Championship.

However, this wasn’t the last win for England in Portland, as the Federation Cup (a Davis Cup-style event) ran alongside the World Championships. Although neither the men’s nor ladies’ teams qualified for the Federation Cup finals, they both reached the final of the ELA Cup (an event that performs a role like the Europa League does compared to the Champions League in football). The women (Kerry White, Anita Ganguly and Emmalina Thompsell) lost out to the Dutch, but the men (Ady, Dan and the two Petes) went one better, claiming their ELA Cup with a 2-0 win over Mexico. As a result, the men are now ranked fifth in the world, while the women are even higher, in fourth.

Last, but very definitely not least, the entire English team also played an Ashes series  – singles and doubles – against their friends and rivals from Australia, and the good news is that, just as in cricket, so in handball, the Ashes are now back in England! Which, at the time of writing, is more than squad-member Gareth Price is, after he mistakenly booked his return flight for a day later than the rest of the team…