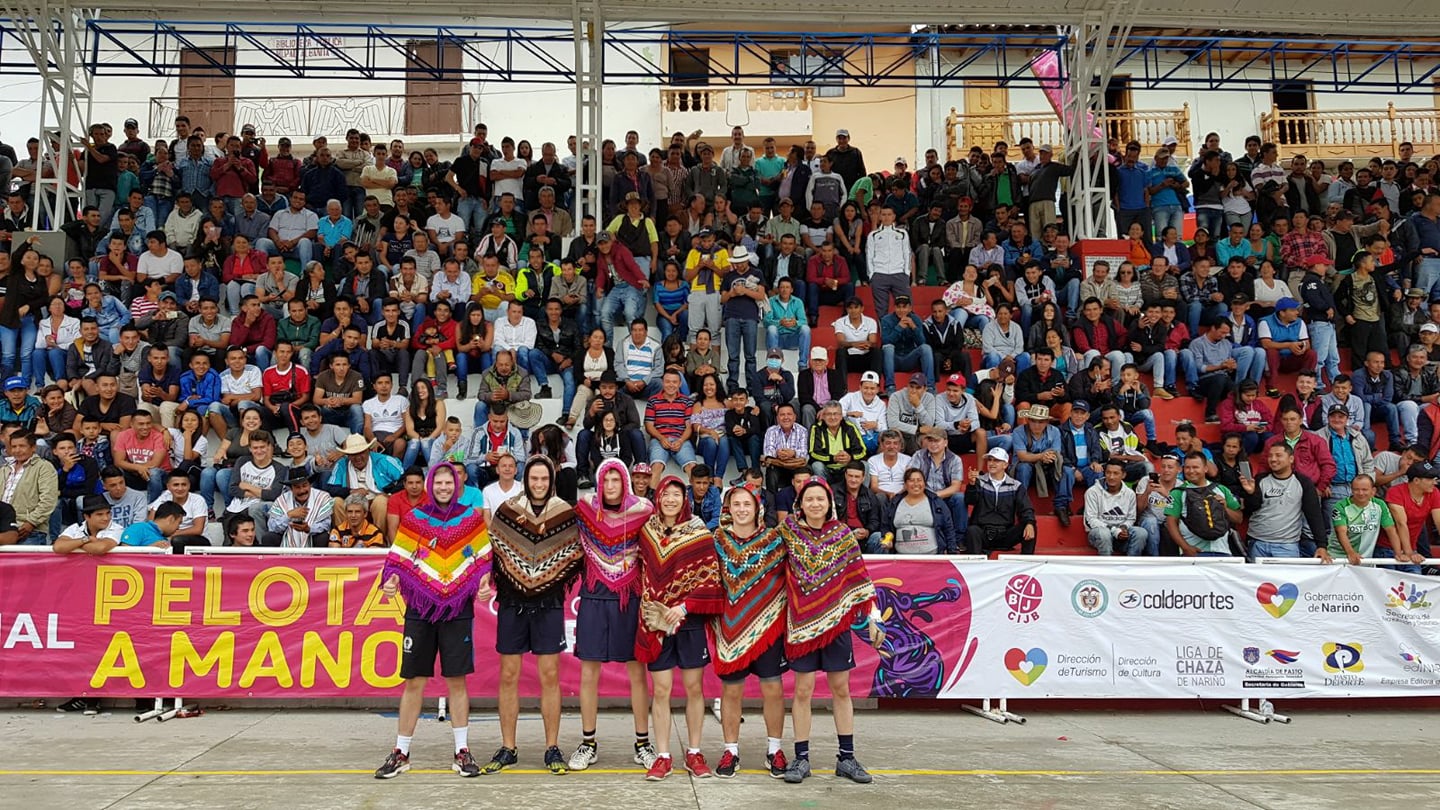 Team GBR are back from a wonderful and inspiring week in Pasto, Colombia, where we competed in the CIJB  World Team Championships. We may not have won a trophy this time, but we’ve plenty to be proud of, had some phenomenal experiences and left with memories and friends for life.

Like all CIJB tournaments there are 4 events to play in (not just wallball). This year we fielded a team of seasoned pros and new development players and we hope the next generation has been inspired to continue. Our party included Luke Thomson (taking on the mantle of Captain), Daniel Grant, Luke Stradwick, Penn Chai, Ian Chai and Monty Evans. We’re only expected to perform in the wallball, in the other sports we set out not to just make up the numbers, but compete and do ourselves proud.

Before getting into things we must say a huge thank you to the CIJB, the government of Narino, our amazing guides Andreas, Mafe, Brian and Jessi and all the people of Pasto for being so welcoming, so friendly and so well organized for such a huge event. This was a hugely special event and an unforgettable experience in no small way down to the people we met. 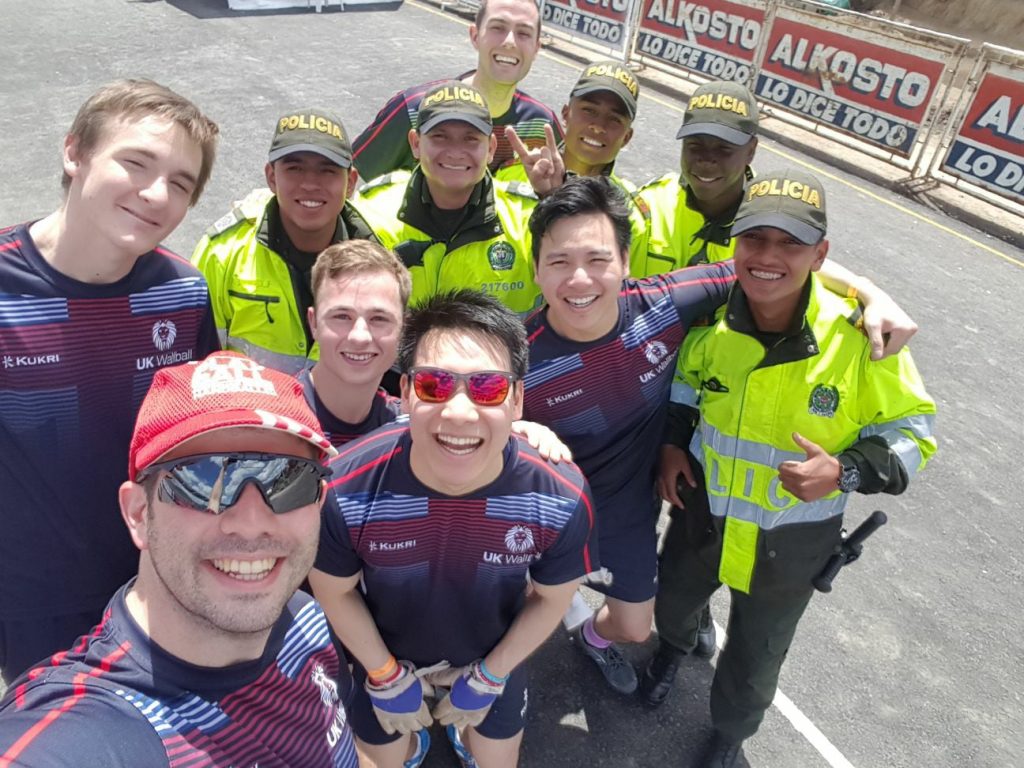 This was our main event and we were hoping to make a major impact. We know based on the last few European  Tour events that Dan & Luke as a doubles pair are comfortable taking on the best from the European countries – but the South American countries were a mystery. There was a lot of hype about Mexico who were fielding the famed “El Matador”, who had beaten Timbo Gonzalez, the best in the world, only a few weeks before. And sure enough Mexico blasted through their group stages and were clearly the team to beat.

Our first match was against Spain, who have tended to be our major rival since we beat them in the European Championship final in 2010. We would be playing Kruithoff (fresh from training in New York) and Bueno. This was a must win as we all realized that, although two go through the 4 team group stage, the second place would play Mexico in the quarters.  We knew it would be a close game and unfortunately it did not go our way. A frustrating match featuring line judges not paying attention, a referee who didn’t know all the rules and some gamesmanship on the court all added up to us losing 11-10 in the second game, with one of our points erroneously reversed at a crucial moment.  This unfortunate experience led Team GB to step into the refereeing mantle for the rest of the event and both Lukes, Penn, Dan and Monty (making his debut) refereed the lions share of the tournament along with Venezuela. Thank you to the CIJB for having confidence in  our team.

We came through our other two games comfortably and faced off against Mexico in the quarters. It was a spectacular show from the Mexicans with El Matador’s power and accuracy unmatched by almost every player in the world and, backed up with Isaac, his speedy and stable partner, the duo were invincible. Our boys performed well and sneeked 6 points off them with some aggressive “do or die” play – Grant hitting his finest shot of the tournament, but it wasn’t enough. Mexico then went on to win the tournament comfortably thrashing Argentina in the finals. 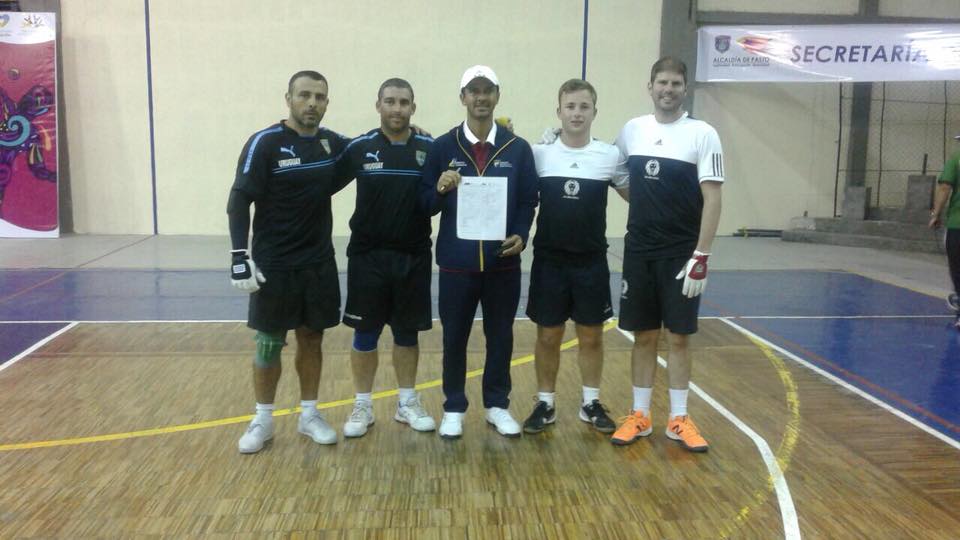 We were in the group of death here and a man down as Monty, our youngest player, had to come late due to an important interview (which he succeeded in, so it was worth being late!! Well done, Monty!). Two of the three best teams in the world were in our group – Spain and Holland. Rather unfortunately Cuba, who we’d have liked to play, were a no-show at the tournament. So we only had two incredibly tough games.

Against Holland we got off to a great start. Grant served with venom and the Dutch had no answer. It was 1-1 and all to play for. Then we lost all our other games (the server rotates around). 6-1. D’oh.

After a day of rain the pitch was then pretty mangled, so if the ball bounced, which it often did, the bounce was down to complete chance. Spain were mightier than Holland and we lost this came to love. However, special props to Ian Chai who hit a remarkable daisy cutter, finding its way into the oppositions half through at least 3 pairs of legs. A fine shot! 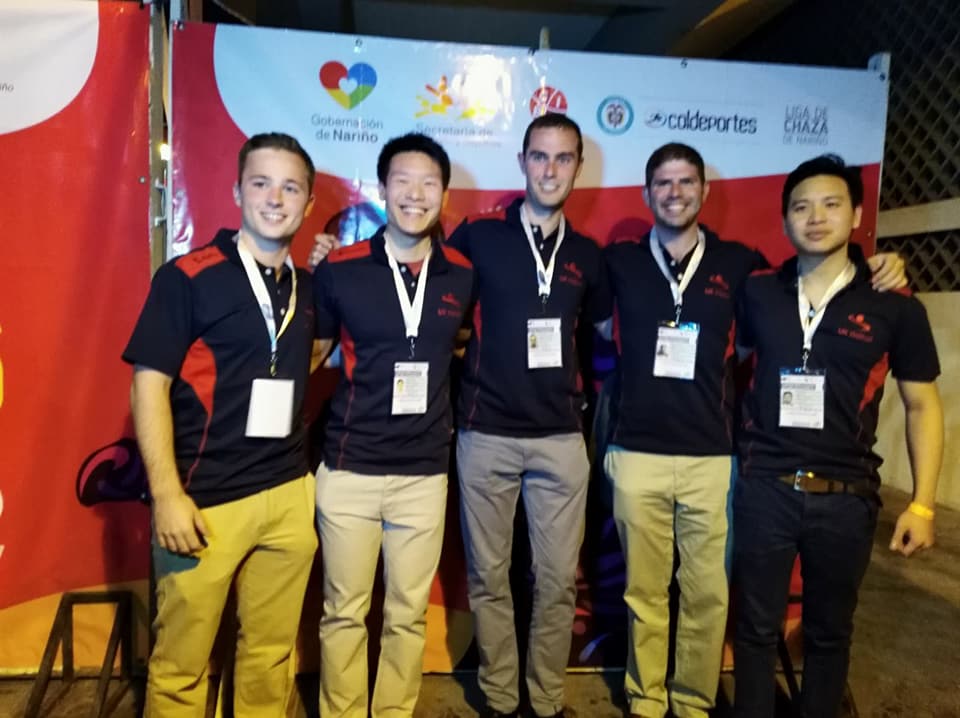 Again with the tough group and no Cuba (we were having a bad draw this year!). Holland and Ecuador. Holland are top 3 in the world and we were no match for their power. The highlight of the match was when finally, Monty arrived just in time to be subbed on the for the final point. He didn’t get to touch the ball but the crowd loved it!

We had a closer game against Ecuador with more than a few rallies but again, sadly, did not come through on top. 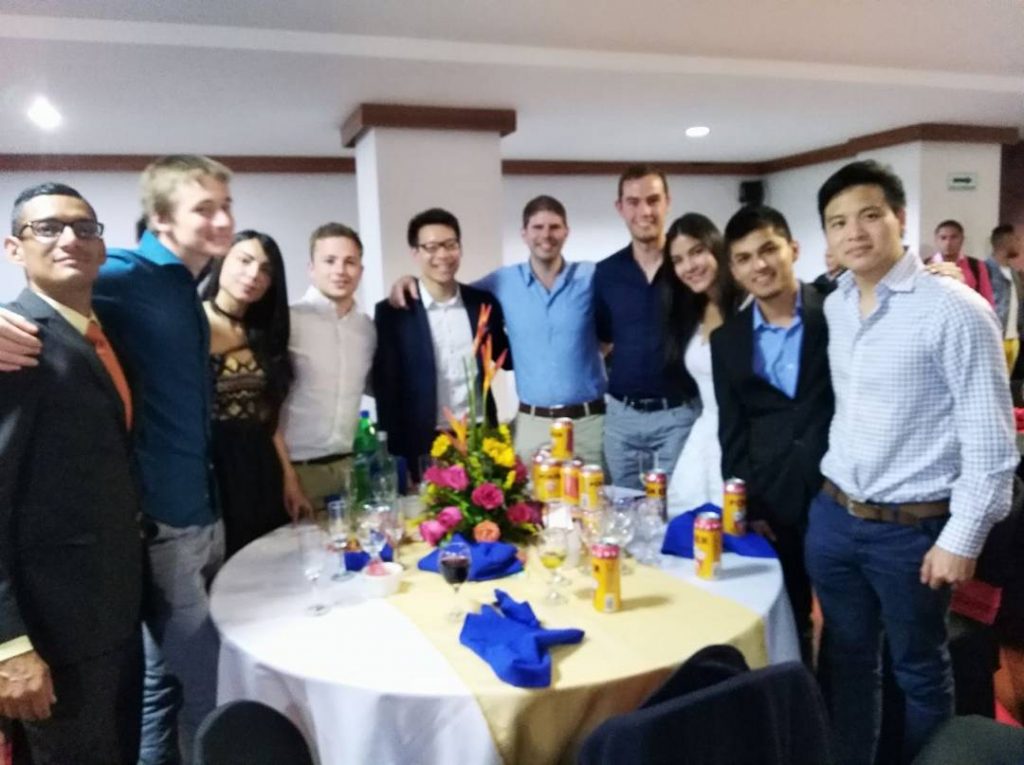 That left Chaza – the domestic game of Colombia and one of the most brilliant experiences for all of our players. We drove from Pasto to San Jose two hours away through the winding, lush green Andes. In San Jose we were astonished to be met by over 5000 people, lining the streets and the stands to see Chaza in action.

Again, as was routine by now, we had a group of death, including Spain and Colombia! The final team was the Basque Country.

The opening ceremony was brilliant with music, anthems and cheering a plenty. Then the games commenced. We were first up against Colombia. We had no hope of winning, but it was a privilege to be on court with these guys. We were asked to serve first which meant Grant had the honour of hitting the first Chaza ball of the tournament in front of the crowd. The court is about 70m long and the ball is heavy and about the size of a tennis ball. Little did we know that in order to serve legitimately you had to make the ball go between 55m and 70m. That’s a long way to hit a ball.  And we didn’t know that particular rule until we lost the first point.

Then Grant had to crack out the much famed “Tornado” serve in order to serve the distance. Eventually he managed it and even cracked out an ace much to the roaring delight of the crowd. 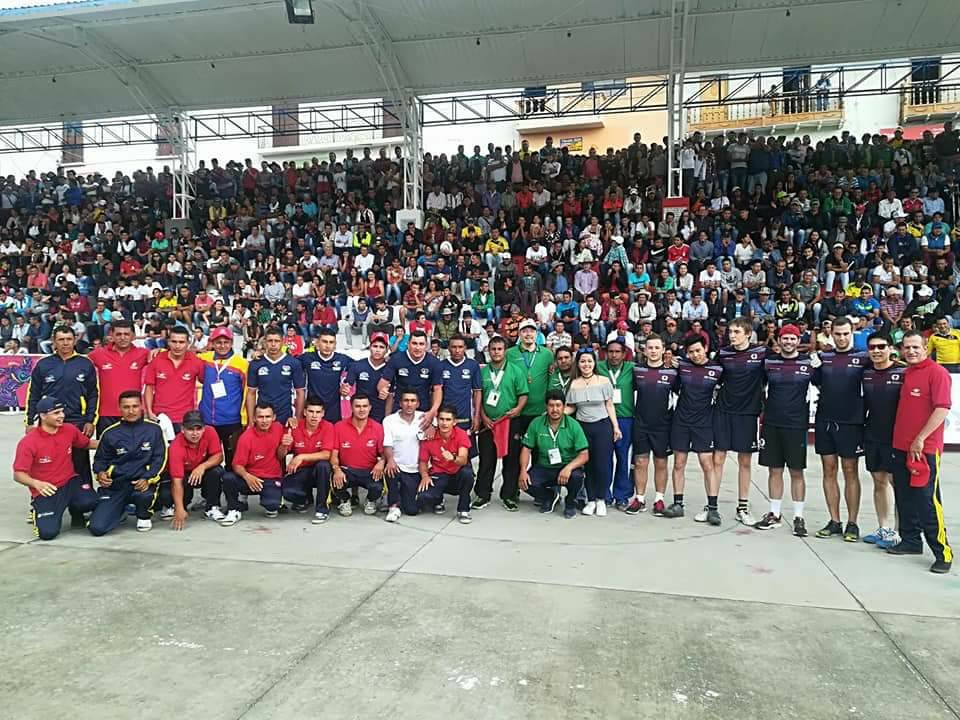 Needless to say we lost to Colombia and Spain but we had a closer game against the Basques. The highlight of all our memories has to be winning over the hearts and minds of the crowd by donning ponchos and walking out to a huge rapture of cheering and applause.

We’ll look forward to the European Championships in August in Holland.