In the early morning of November 9th, a 9 strong group of Great Britain representatives boarded the St Pancras Eurostar, ready to embark on a Belgium adventure. The team headed for the little town of Huissingnie, an hour outside Brussels, for the first tournament of the new season, the Belgium Open. After 6 hours travelling, perfect sporting preparation, the waffles and Wallball courts were in sight. With entrants from Argentina to Ukraine, the tournament boasted a wealth of international stars and was a great opportunity for the team to test themselves again some of the World’s best.

Kathleen Briedenhann and Tessa Mills were first up in the Women’s Open. Straight from a weekend representing GB in France, Kathleen felt right at home, as three steady performances ensured she qualified from her group to make the quarter finals. In the other half of the draw, Tessa fought valiantly but a tough group put paid to her Open chances as she failed to make the top 2.

In the quarter finals, Kathleen was drawn against Canada’s Samantha England. With a powerful right hand, England posed a huge threat, but with her ever reliable defence and a brilliant array of passing shots, Kathleen produced a devastating display and forced her way into the semi finals. There she was to meet Miranda of the Netherlands. Unfortunately, the current European Champion proved too much for Kathleen and edged her into the 3rd/4th Place Play-Offs. However Kathleen rose again, taking on Holland’s Nelie, she spotted the left hand weakness, a clear elephant in the room, and took 3rd place to crown a fantastic season’s opener! 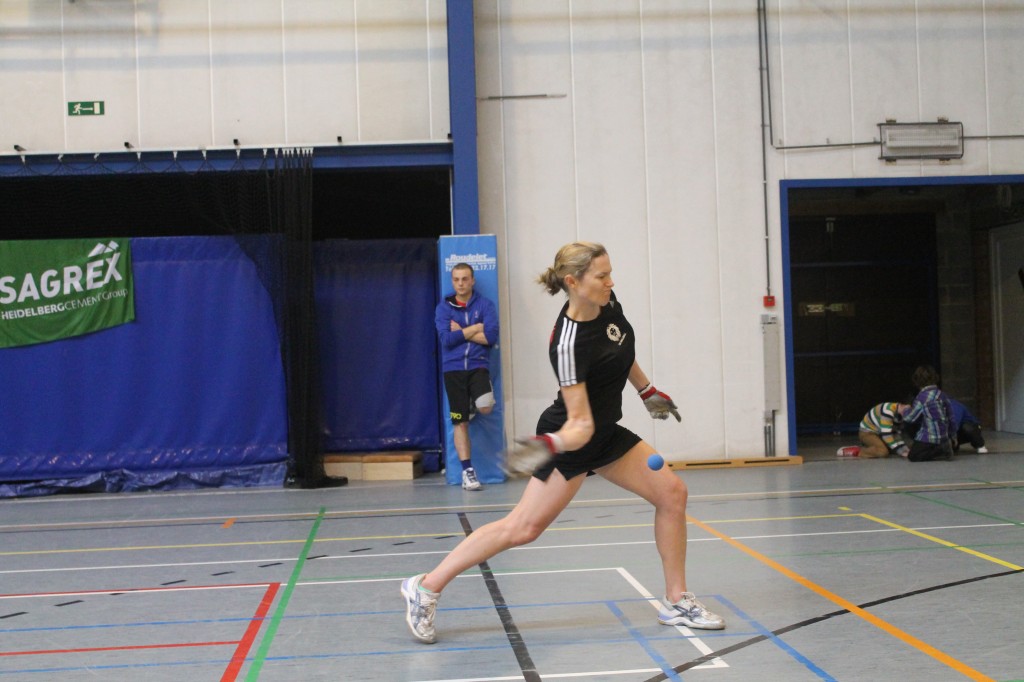 In the Mens B category, GB were well represented by Dick Warner, Oliver O’Sullivan, Anthony Goodwin, Will Ellison and Gareth Price. In his first international venture Oliver took a while to adapt and the one game to 21 nature of the open proved to be his downfall, as he exited at the group stage. Dick met a similar fate, as the big left hander was tasked with a strong and youthful group, however his ever improving game and flamboyant presence is a source of great joy for the Wallball community.

Anthony was also on his first ever international tournament. His natural speed and powerful left-hand will hold him in good stead for the future but his tendency to aim for the ‘no longer there side walls’ proved to be his downfall. After finishing at the base of his group, Ant did win his first game in the plate, a big landmark for a potential star of the future. 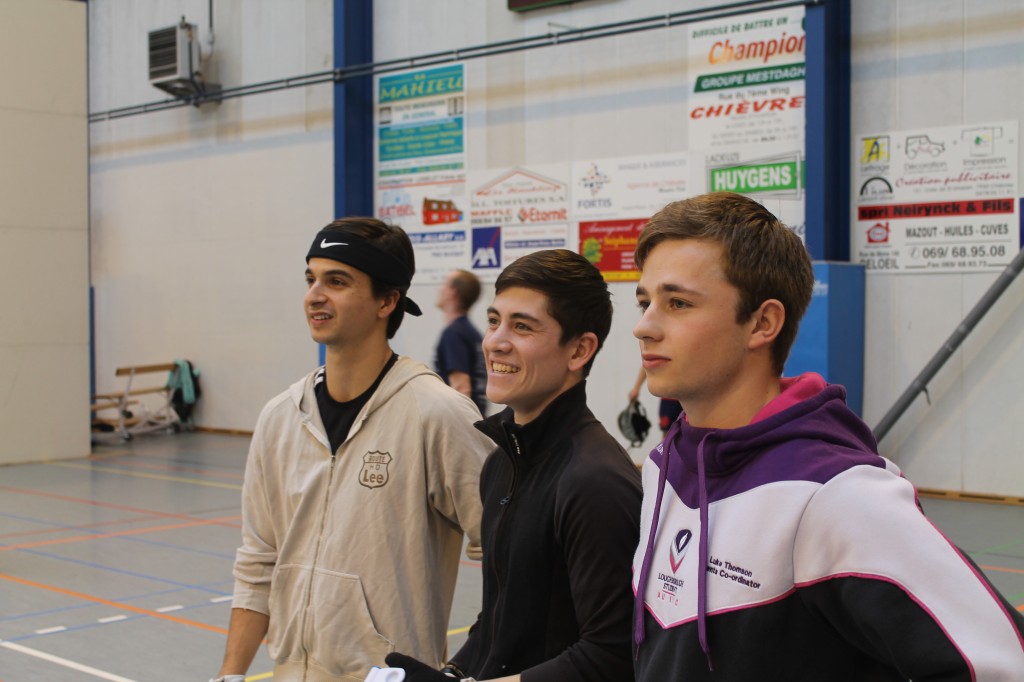 Goodwin, centre, with Thomson & Tristao. The boy has serious potential!

Gareth Price entered the B grade as an early favourite. The powerful right, backed up by his ever present tactical nouse proved too much for the rest of his group, as he left them in his wake with three comfortable wins. To that extent, he was followed by fellow Rugby Fives guru Will Ellison. After claiming his first UK B grade win in February, Will was back for more, and his superior speed and power were clearly evident as he strolled through his group.

As both Gareth and Will continued their fine from to win their respective quarter finals, there were dreams of an all GB final with both competing against youngsters in semi-finals on opposite sides of the draw.  Unfortunately it couldn’t have been further from the truth, a hung over Will started slowly early on Sunday morning and lost out to a strong Belgian, while Gareth took on a 15 year old Frenchman. Already touted as a potential star of the future, the youngster showed a range of textbook shots, and raced into an early lead. Although Gareth began to pull it back, his time ran out as the Frenchman claimed victory to leave both GB players as beaten semi-finalists. 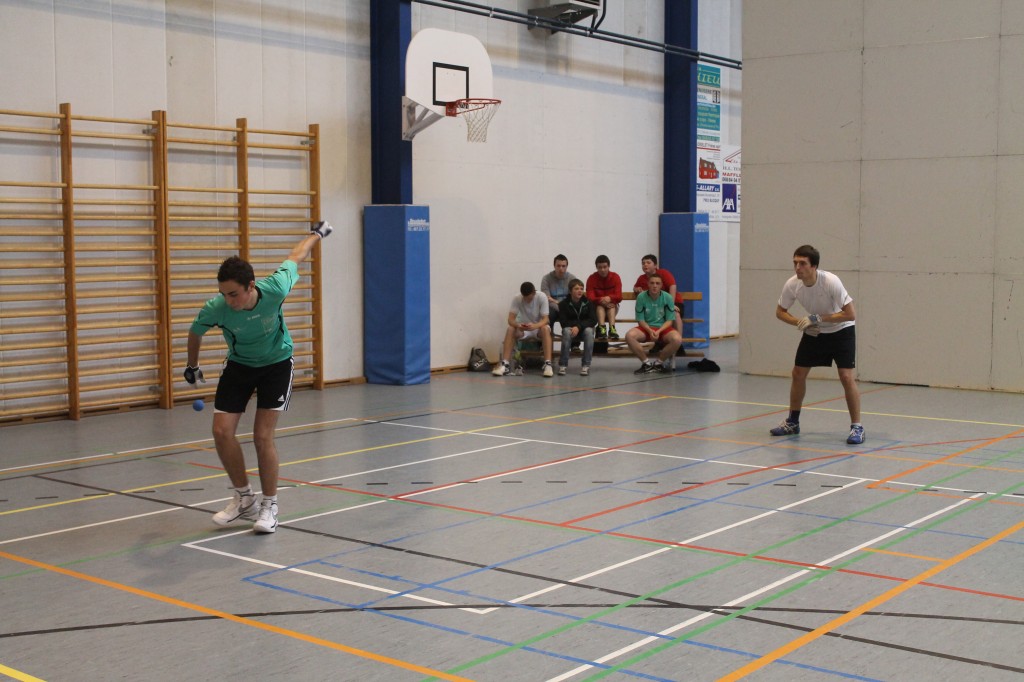 Ellison performed valiantly this weekend. He’ll be back next year as an A Grade player.

In the Men’s Open, Daniel Grant, Daniel Tristao and Luke Thomson pitted their skills against some of the World’s best. Thomson opened up against an unknown entity, Leandro Rodriguez of Argentina. On slow courts, after a pre-sunrise start and with a jelly soft ball, Luke couldn’t force the Argentine back, and as Rodriguez dominated the front court, his power proved too much for Thomson who succumbed by 21-9. In his second group match, Thomson took on Walter Wielandt of Belgium. Wielandt was on fire, killing from all areas of the court, and as the “allez”s flowed, Tekkers began to implode, and in a shock result, lost to the Belgium 21-15, meaning he missed out on a top 2 finish and fell into the consolation plate.

Daniel Grant also had a torrid start to the Open. After some costly errors Dan faced match point at 20-16 to the impressive talent of Dimitri Dupont, but with pressure kicking in Dan upped his game and showed his real quality to turn the game on its head and take it 21-20. After a much easier second game, Dan affirmed his position as group favourite to move into the last 16.

In almost identical circumstances Daniel Tristao had a tight start. The Brazilian speed merchant held his nerve to overcome the always dangerous Gérard Picard of France, 21-19. Tristao followed up his win with another to top his group, however a rather unlucky draw pitted him again second seed Vlad Klym of the USA in the last 16. Dan put up a great fight but Klym was unstoppable. Rolling out the kills with both hands, Klym had ‘one of those days’ and Tristao had no way to match the talented American losing 21-7. 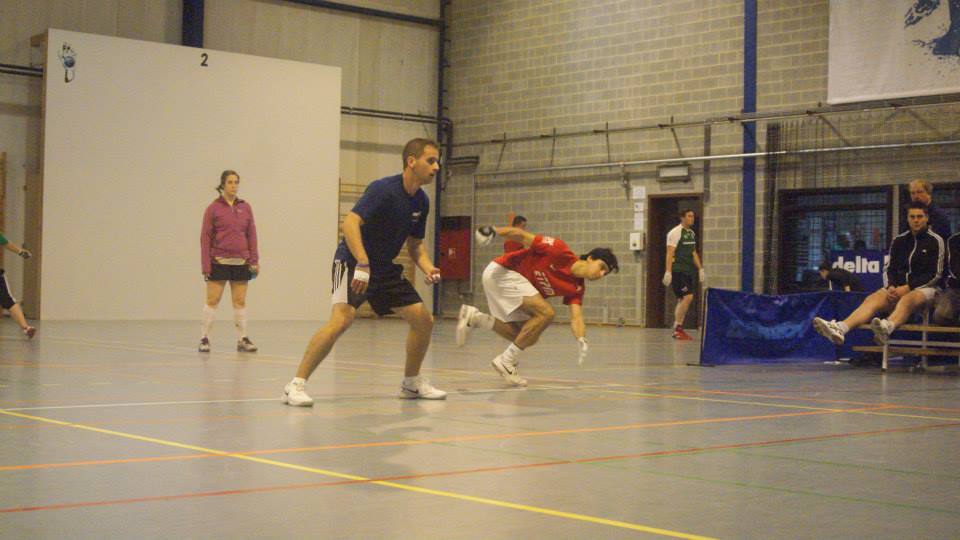 Tristao scampers to retrieve another cracker from Vlad

In the Plate consolation event, Luke began to find some form after a very poor morning. Knocking out the powerful Dylan Drent in the first round, he then produced the season’s first bagel, with a 21-0 win in the second. A comfortable semi-final win put Thomson through to the plate final to face the Belgian Pozzebon Vincent. In some form of redemption for his earlier knock out, Thomson strolled to a 21-7 victory, claiming his first international title. 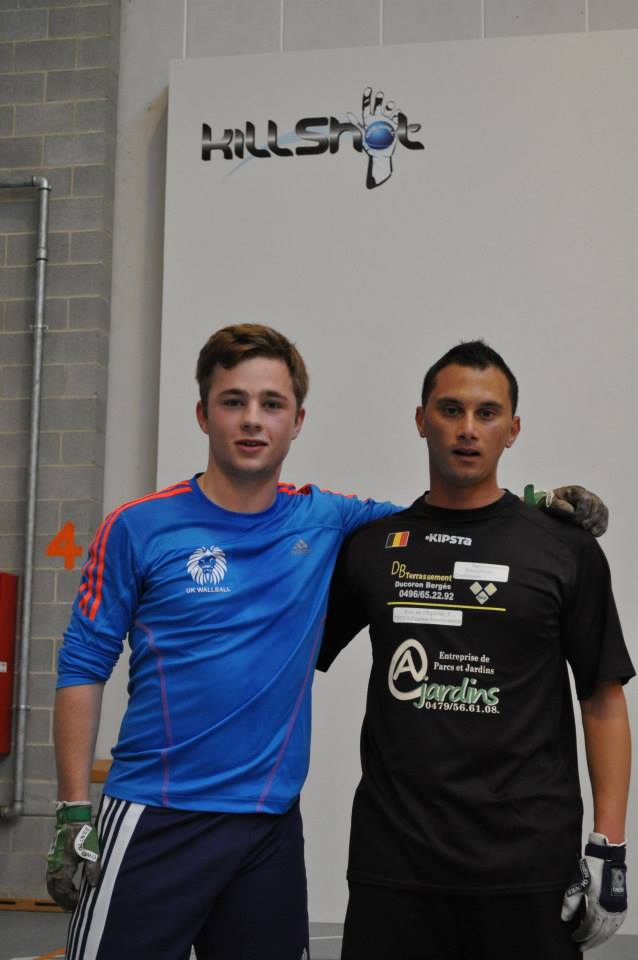 Dan Grant was still fighting hard in the main draw and at 12-12 with Santiago Maimone of Argentina, he looked in danger, but after a quick fire 9 points, Grant stole the game and moved into the quarter finals. Here he faced number 4 seed, Victor Lopierre, USA. Lopierre raced into an early lead as Dan struggled to keep up with the dominant left-hander, however as Dan began to work his opponent out he gradually clawed back his early deficit. Had the game between to 25 it may have been a very different result, but Dan just ran out of points and lost 21-18 in an enthralling encounter.

After a lovely meal in a local restaurant, arranged on by the fantastic organizers Guillaum Doumolin and Sébastian Potiez, and a little too much Belgian beer, the GB squad completed a fine Saturday, ready for the Sunday doubles event.

In the Women’s Open Tessa and Kathleen teamed up, and were drawn in a group containing a hotly favoured Candian/ Belgian pair. The GB girls pulled off arguably there best ever showing as a doubles pair to grab a fantastic win as they went on to top their group. In the semi-finals the girls came up against a strong Dutch pair and could not repeat their previous heroics. This scenario was replicated in the 3rd/4th play-offs as the girls took on the Dutch 2nd string pair and were just pipped to 3rd place. A 4th spot finish for Tessa and Kathleen did mark a fantastic tournament for the girls and there are many signs of a promising future as they look to become one of the strongest doubles pairs in Europe. 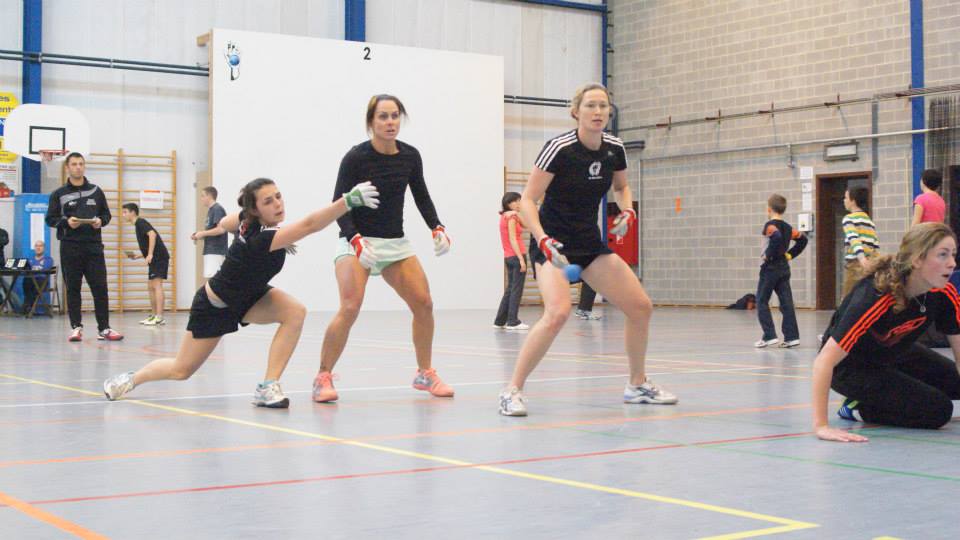 In the Men’s draw both Anthony Goodwin, with his Dutch partner, and the GB pair of Dick Warner and Oliver O’Sullivan, struggled in a tough B grade and failed to pick up a win in the Doubles competition. In stark contrast, Gareth Price and Will Ellison looked like serious contenders, winning their group and storming through to the semis with a powerful win over some boisterous French. The ever reliable Gareth was playing well and Will was growing into the competition with some strong performances. However with daylight running out, game lengths were reduced from 21 points to 15 and in the semi-finals this proved to be their undoing. After a slow start the pair grappled to get back on terms against strong opponents but the 15 mark came to soon, and they crashed out at the penultimate stage.

In the Men’s Open, Luke Thomson paired up with Frenchman Gerome Gamez, but their first time partnership was clearly evident as they started slowly and fell to a 12 point deficit in their first game. Although they began to form an understanding in the second half of the game, the gap was too great and they lost the first match of their group. However things began to look up in the second as they took on a promising pair of Belgian Youth Internationals. Luke started to dominate the middle of the court as Gerome hit some fabulous shots from left and they took the game comfortably, 21-8.

Progressing through to the last 16, the draw pulled up a GB special as they met the pair of Daniel Grant and Daniel Tristao who had comfortably won their group. With Thomson gunning for the win and Gamez performing admirably against Grant on the left the Anglo-French pair started well and looked as if they may pull off a big shock as they held a 17-14 lead. A few tired errors from the Frenchmen however gifted Dan squared back into the game and they were able to hold off another late challenge to take the game 21-17 with a Tristao flourish of 7 points in a row. 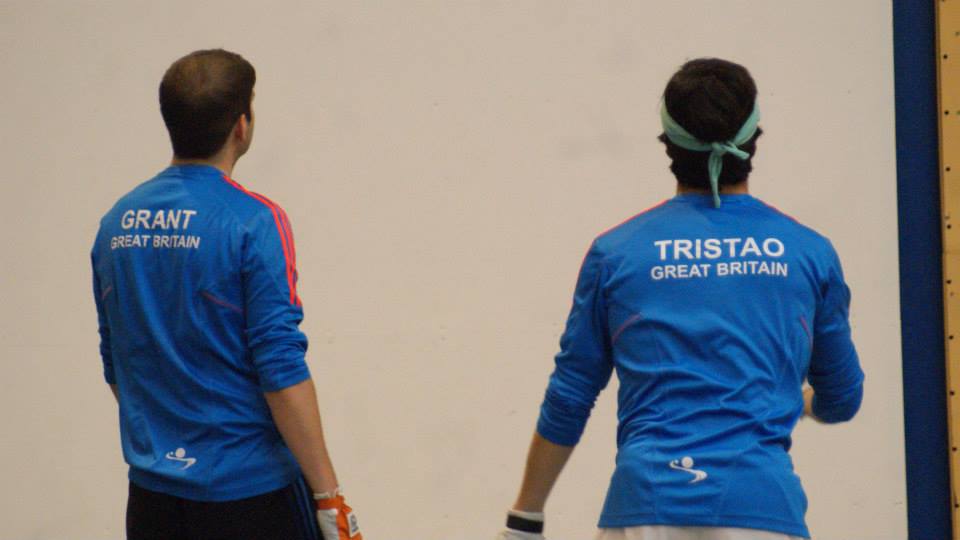 Tristao and Grant then took on the top Dutch pair in the quarter-finals of Wassenaar & Steenstra. With an unprecedented display of power and an all-out attacking approach from the Dutch, the GB pair were immediately on the back foot, and by the time they had found a working game plan they were already in trouble, as the exciting Dutch Pair triumphed 15-9.

The game marked the end of GB’s involvement in the tournament and just left time to reflect on the many highlights: A brilliant weekend for GB Women, with Kathleen taking home 3rd in the singles and 4th in the doubles with partner Tessa Mills, Luke’s redemption to comfortably win the Open Plate and Dan Grant almost taking out American Victor Lopierre.

Both Men’s competitions ended up as all American affairs as Polanco beat an injured Klym in the singles, before the duo paired up but lost to Roberts & Lopierre in the doubles final. The women’s competition was won by De Boer in a great win against the European Champion, Scheffer. The doubles by De Boer again, with her partner Nelie Steenstra.

After the waffles had been eaten, the Belgian Beer drunk and the competition rounded to a close on Sunday night, there are many lessons that the British players will be able to take into the Dutch Open just a week away. The opportunity to watch and learn from the Americans will prove invaluable and the development of Will Ellison and Anthony Goodwin may prove to be a huge factor in the future of UK Wallball.

Killshot Club 2013 completed… onwards and upwards for UK Wallball, Dutch open up next!