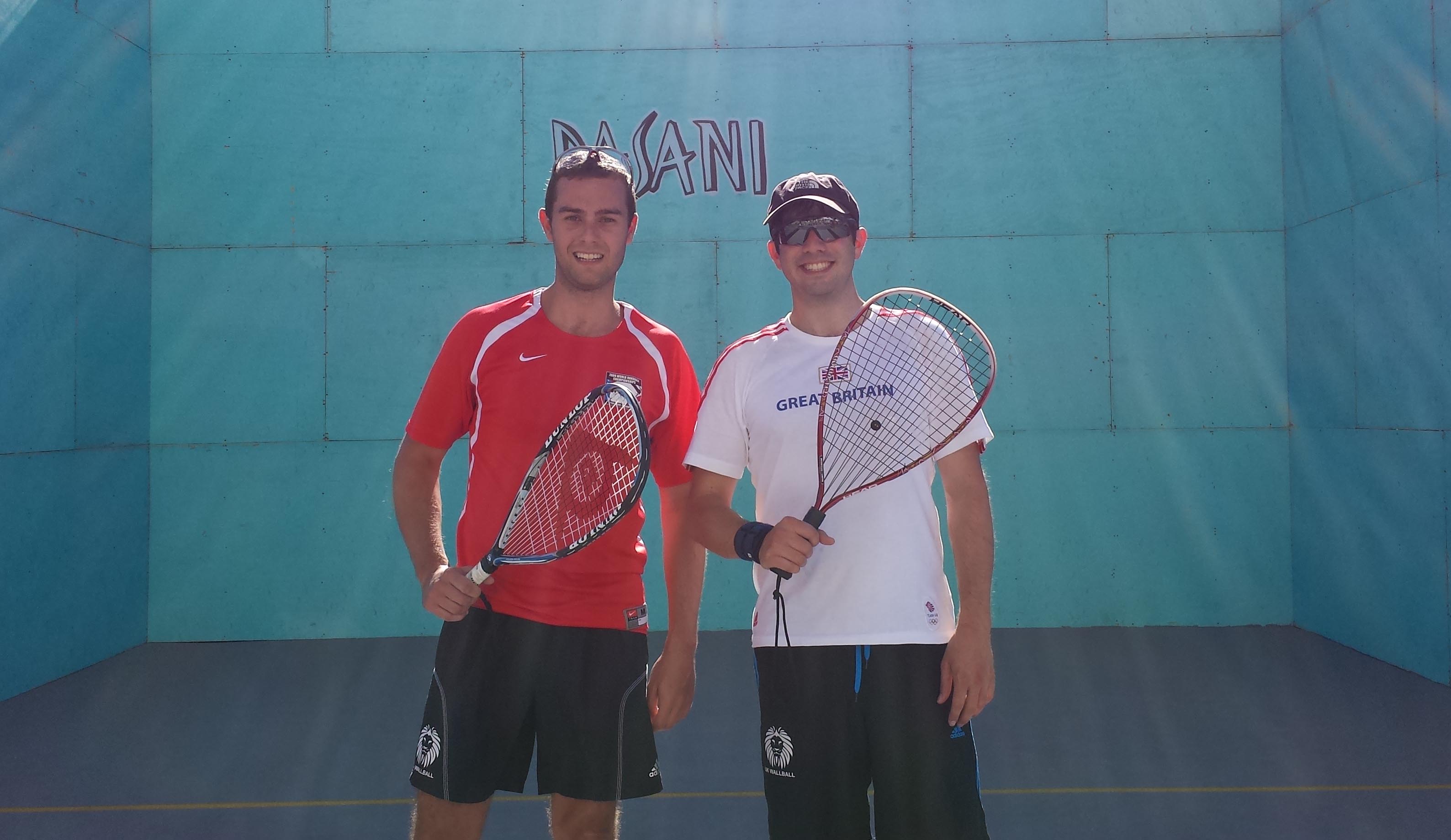 September 18-21st 2013, Las Vegas: Daniel Grant and Luke Stradwick hit the Strip for the World 3 Wall Championships. You could argue that the duo entered too many grades this year – 6 each, which when temperatures hit 40 degrees is tough, but tougher still when you keep winning and keep having to play in 40 degree heat! To make matters worse both players were not only playing wallball at this year’s event, they were also playing racquetball!

The World 3 Wall Championships is the annual pride of the 3-wall calendar. It is chocked full of many grades, formats and disciplines. The tournament is a union of several sports: Wallball, Outdoor Racquetball and Paddleball all attracting the best players in the world to fight it out on the vibrant blue courts. 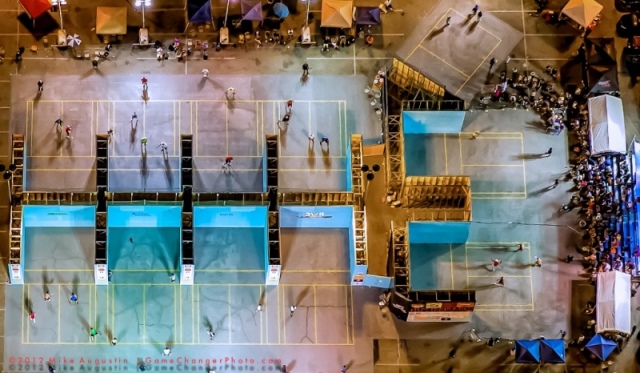 An arial view of the courts. Wallball on the north side, racquetball on the south.

Here’s a quick summary of what our guys did:

Let’s start with the 3-Wall.  Dan played this tournament 2 years ago, so was familiar with the intrigue that 2 extra playing walls adds, but Luke was in for a baptism of fire. His first match in the B Grade was against the no.4 seed, Benjamin Torres.  Luke fought is heart out and learned on the fly but sadly lost 15-13, 15-11. Not to worry, he still had 5 more chances at glory.

Dan entered the Open Division and had an incredibly tough match against Braullio Ruiz – one of the best 3-wall players in the World from Los Angeles. Needless to say Dan lost, but did get 12 points off his foe in the second set.

Dan also played in the small ball division. He played in this division 2 years ago when he won the C Grade. Naturally this time he entered the A grade and he proved that small ball is a sport he can excel at, using the Rugby Fives whip technique he has honed over the years. He reached the final only losing 1 set. The final was against Joe Delsardo, a man who used to be a professional NFL Quarterback before retiring from that sport and focussing on wallball. Needless to say the man is extremely competitive and determined and the final was a real nailbiter.

It started at 1pm and finished at 2:34pm. This was a hot time to play and the match lasted about an hour longer than any others the competitors had played. Dan got the better start and after some mammoth rallies he took the first set 15-10. But Delsardo fought back and although it was neck and neck for some time, a brief period of aggressive kills saw the American win 15-9. The final went to a tiebreak and Delsardo managed to carry on his dominant form and took a 9-2 head start. But then Grant upped his game and snatched back at the lead. Sadly the Brit made a tired looking unforced error at the closing stages and the American capitalised. The final score was 10-15, 15-9, 11-5 to Delsardo. Although he lost, Grant was extremely pleased with his performance and is keen to enter the Open division next year.

The British duo then teamed up for the B Grade 3-Wall doubles. The pair gelled and ended up winning their fair share of games before losing in the quarter finals in a close 3-set tie-breaker to the friendly pairing of Ruiz & Valle. 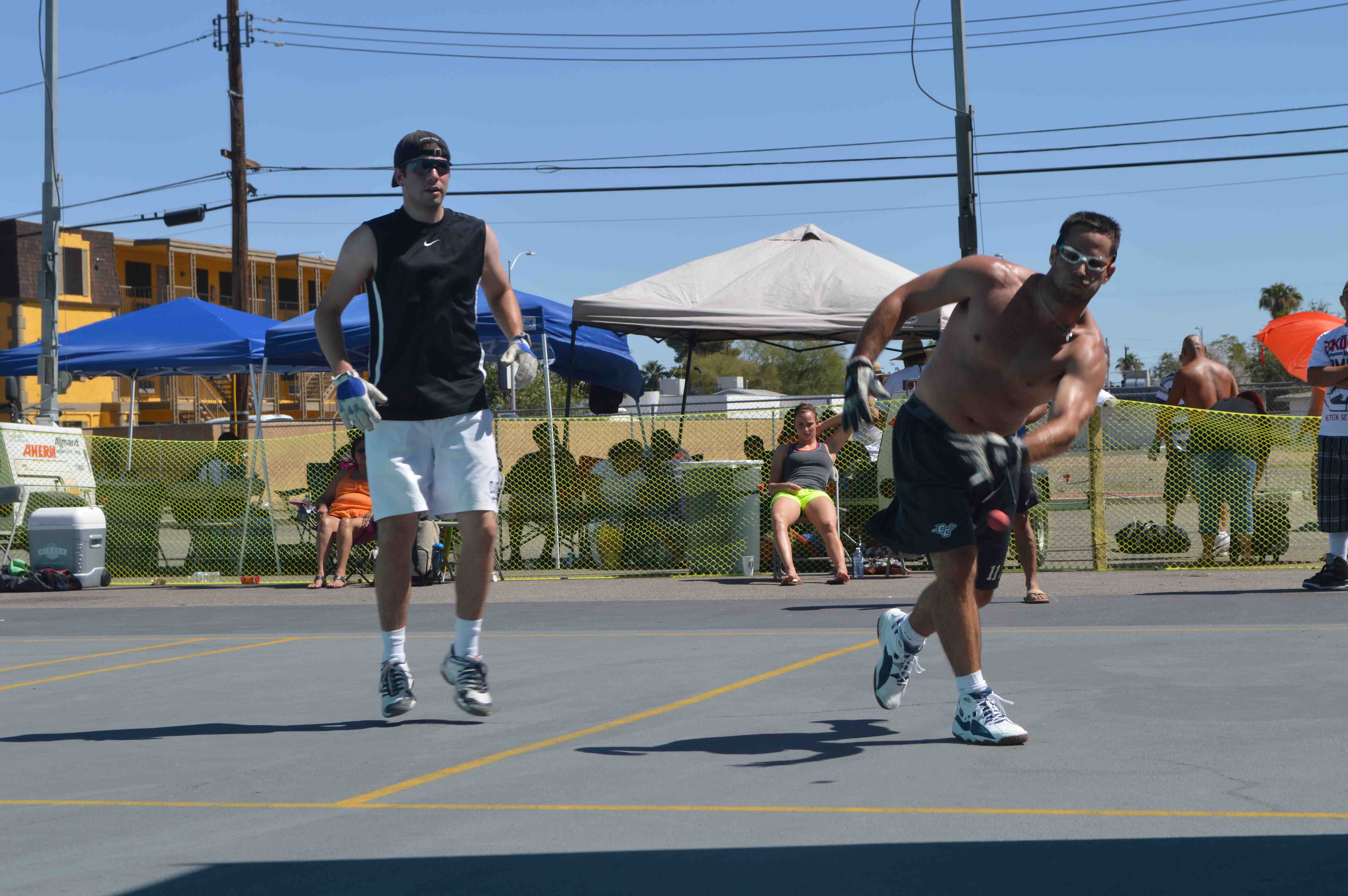 Both Dan & Luke entered 1-wall grades – the favoured events for us Brits. Luke entered the B grades of both the small ball and the big ball events. In the big ball Luke won his first round match comfortably 25-13 but then sadly an administrative error caused him to be disqualified from the tournament. In the small ball event – a ball which Luke has hardly ever played with, our plucky Brit did extremely well and although it was only a small bracket, he managed the reach the final, where he lost to James Fazal from New York. A tremendous achievement.

Grant only entered one grade – the Men’s Open. His first match was against the favoured hot and cold player Lowveens Jacques of New York. A few line calls caused American tempers to flare and Grant took advantage, clawing the score back level before winning 25-20.

This saw Dan progressing the Last-16 where, in a repeat of the of last year’s World Championships, he played Peewee Castro. Here Grant lost again, but was still pleased to make it to the Last-16 of a major world event. 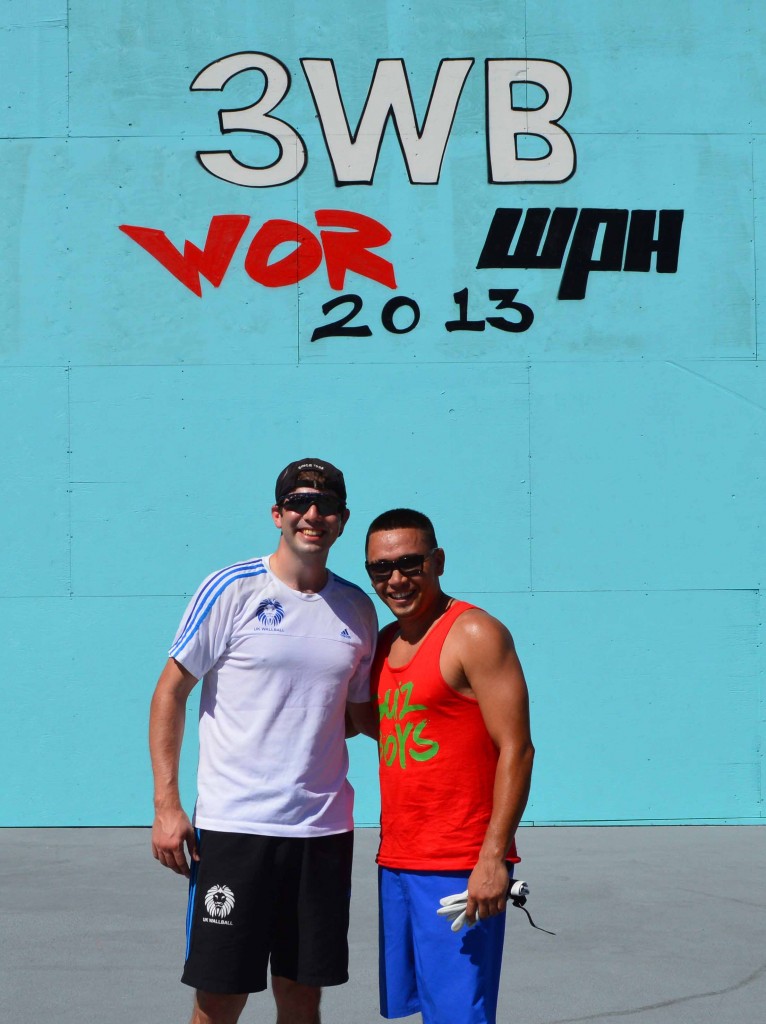 Luke and Dan figured that if they travelled all the way to Vegas, they may as well play in the racquetball tournament too. Sure, they’d never played it before, but the singles had a ‘First-timer’ bracket and doubles had its ‘C-Grade’.

Racquetball is a sport played with what looks like a stunted squash racquet with a wider head. Balls (same as wallball balls) can be thumped at incredible speed and the top pros in the world showed that rolling balls out at 100mph was both hugely impressive and deadly scary!

Dan & Luke paired up in the doubles and both used their wallball awareness and previous tennis/squash experience to learn and quickly excel at the game. Thoroughly enjoying themselves they actually progressed to the semi-finals, winning a fantastic quarter along the way (11-9 in the tie-break).  In the semis they played Escarsega and Webb, who seemed quite strong for the C-Grade. Our boys lost 15-6 15-13 but were oh so close to taking it to a decider.

In the singles it was Grant who took to the game more strongly, not only beating Luke, he also beat the tricky Biehl of California and the impressive JJ Guerro – a USA army veteran with a remarkable story. With this last win he also won the grade becoming the World 3-Wall Racquetball Novice Champion! 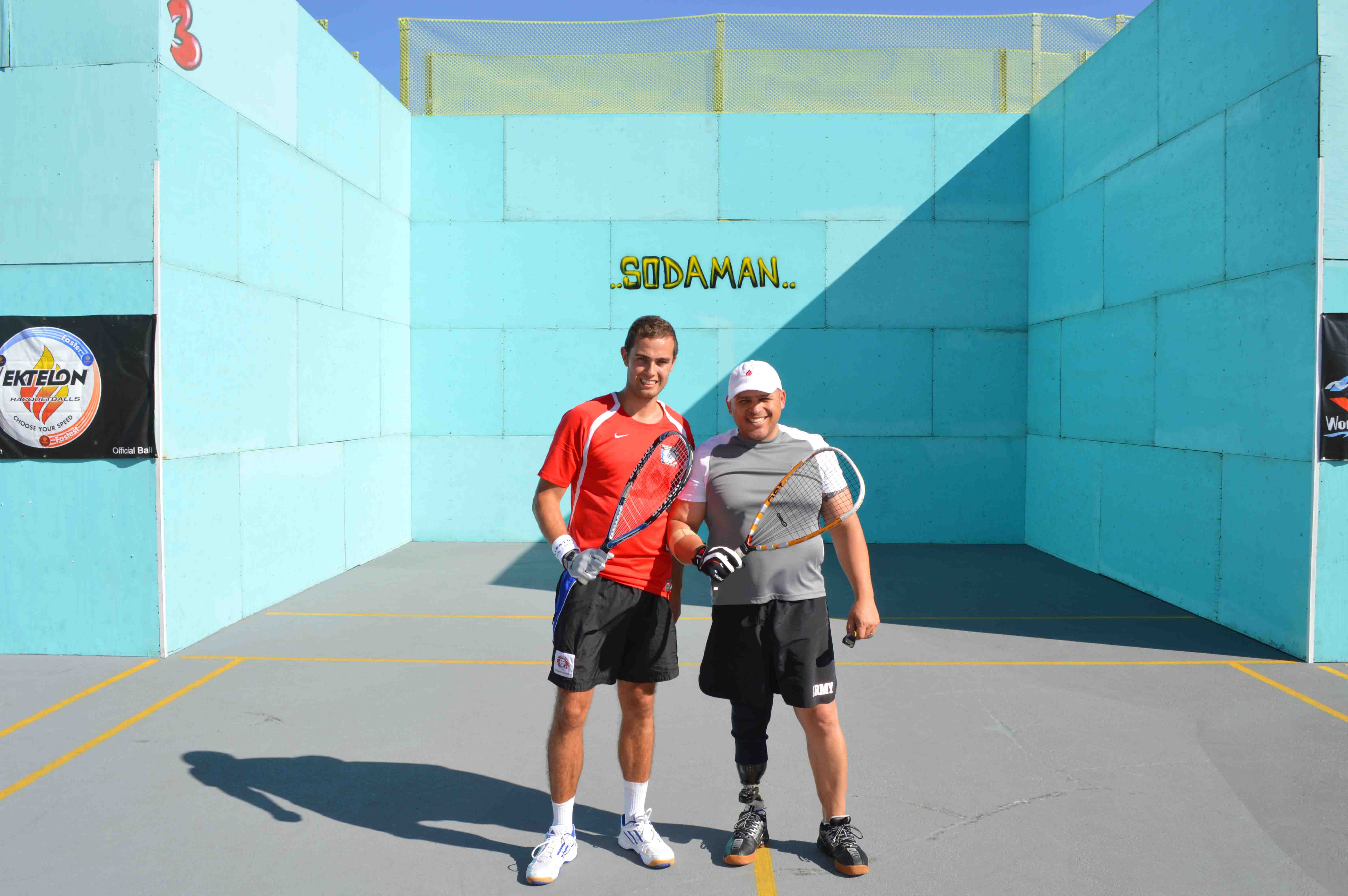 Our boys loved racquetball and started up a dialogue with WOR (World Outdoor Racquetball) about looking to introduce outdoor racquetball to the UK – after all, the same courts that we use for wallball are used for racquetball and the game opens up options to players with different tastes. We look forward to a demo at the UK Open in 2014.

And that’s it from Vegas. Thanks to WPH Live and WOR for organising the event, and all the sponsors, players and spectators. Luke and Dan arrived back in the UK with 2 runner’s up plaques, 1 champion plaque, melted shoes, burnt shoulders and tremendous memories. Roll on 2014! 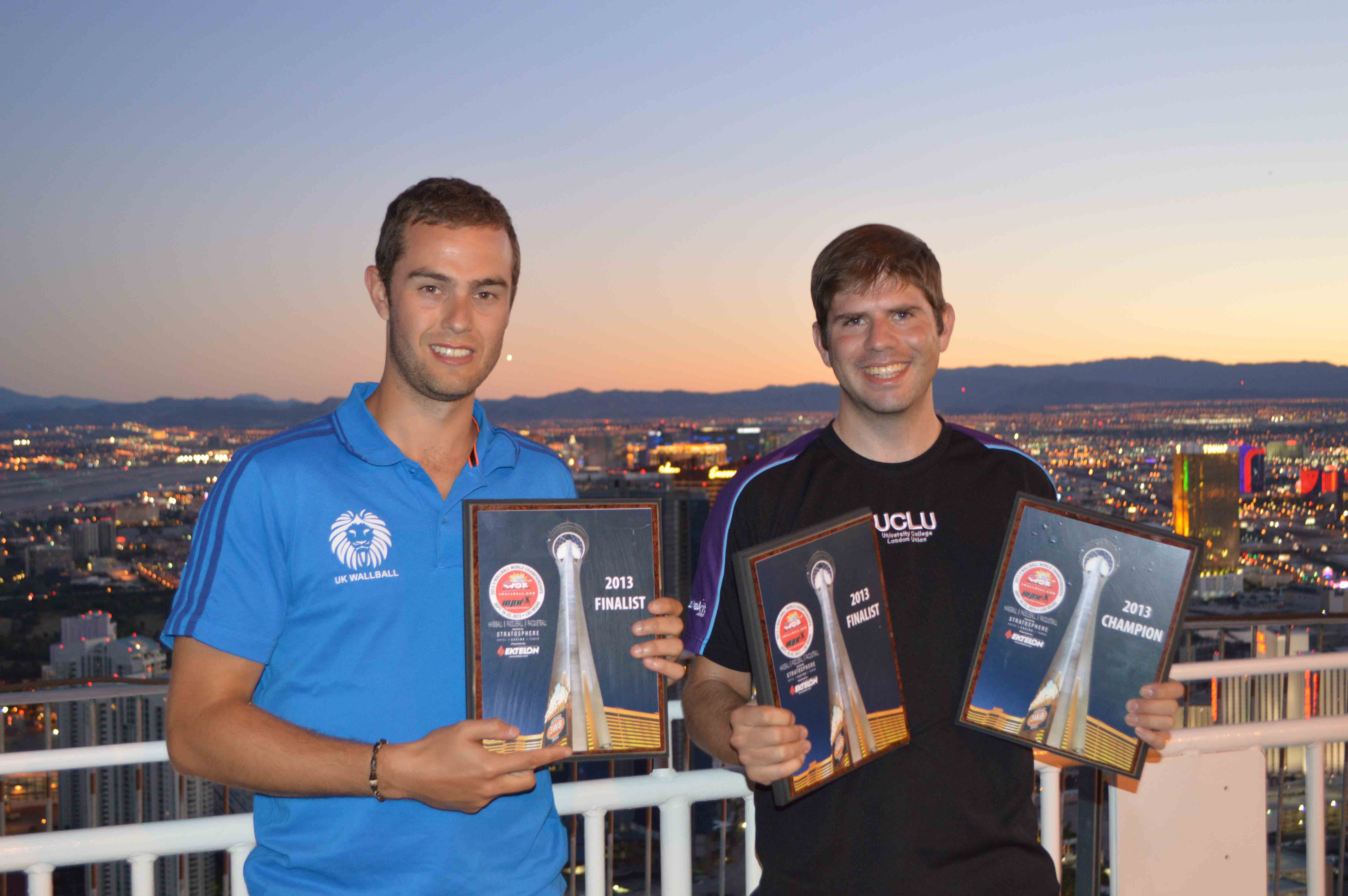