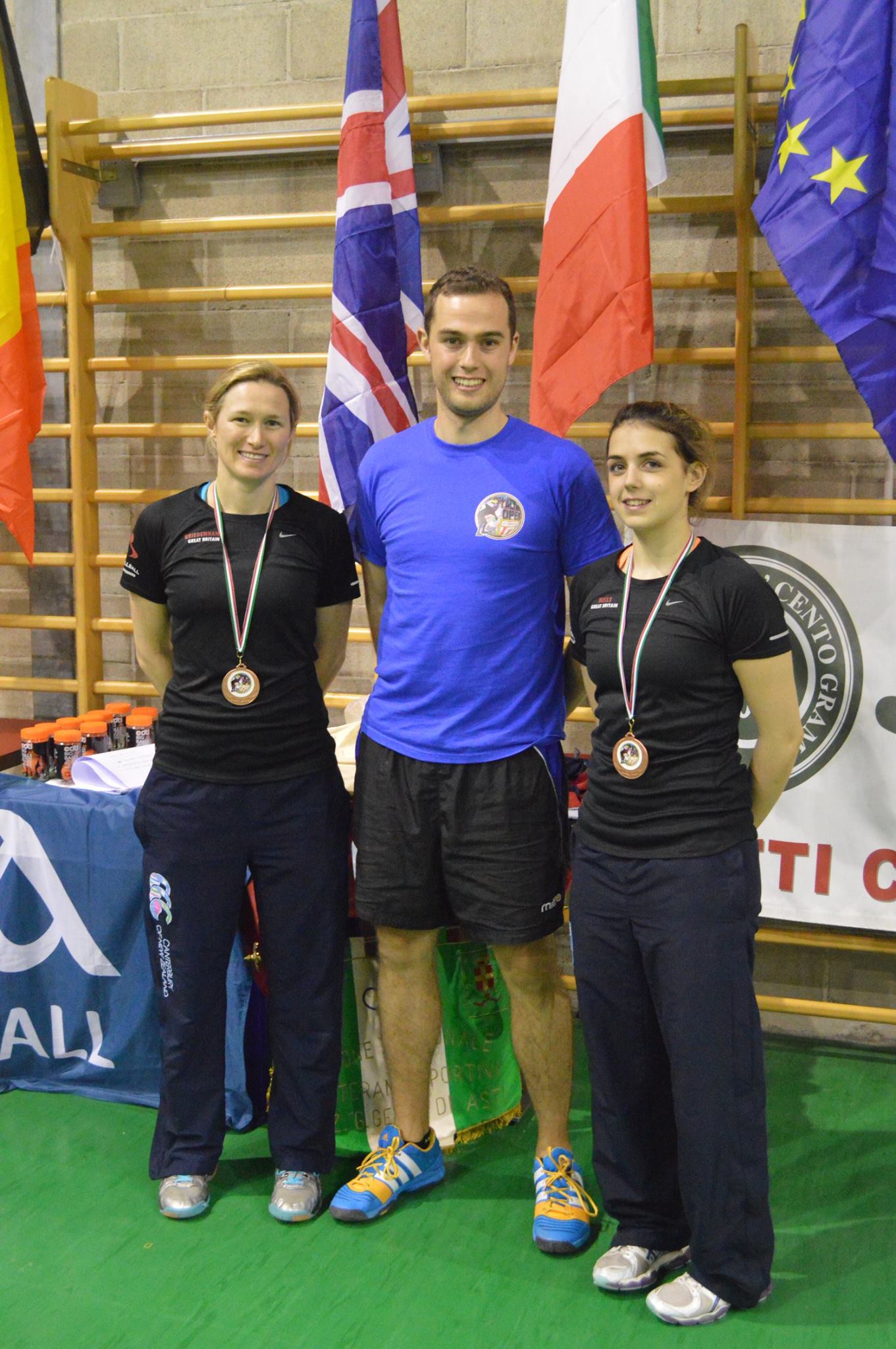 Nizza Monferrato, a small, picturesque, wine producing town in North-Eastern Italy was once again host for the Italian Open. Three members of the UK Wallball squad managed to avoid strikes by Italian airport staff to make their way to Italy for the tournament. Sadly other competitors were not so lucky; with 12 Irish players having their flight cancelled at the last minute resulting in having to pull out of the competition. The Belgium competitors also had their flight cancelled but such was the determination of these players that they made the 2200km, 24 hour round trip by car to Italy, much to the delight of the other competitors.

Despite the last minute withdrawal due to the airport strikes, the competition was healthy with around 45 players competing from 7 countries. Six American players had travelled across the Atlantic for the tournament and these players would be the toughest tests for the European entrants. There was also the return of Lorraine Havern (IRE) to the women game after a year out which would add to the strength of the Women’s competition.

Flying the flag for UK Wallball was Luke Stradwick in the Men’s Division and Tessa Mills and Kathleen Briedenhann for the Ladies.

With no other UK male representative in the competition, Luke stepped up to unfamiliar territory of the Open category where the games were faster and less forgiving on mistakes. Being in an initial group of 3, he knew that just one win would be enough to guarantee a place in the quarter finals. He faced European #3 Sebastien Potiez (BEL) who’s serve proved too much to handle and succumbed to a 15-4 defeat before meeting Richard McNally (IRE) in a must win game. Luke led for most of what was a poor game by both players, both pushing a number of serves wide at crucial moments, but McNally held on to snatch the game 15-12 at the end. Despite a last place finish in the group, the format of the competition meant that Luke could still progress through if he was to beat highly rated 20-year old Belgian Steve Soquette, currently ranked #6 in Europe. Playing a more relaxed game knowing his chances of progression were low, Luke saw himself with a surprise lead halfway through the game. Once again Luke was unable to kill off the competition when it mattered and lost 15-13 to Soquette who would eventually go on to reach the Final.

The format of the competition meant that Luke joined the latter stages of the B competition. After beating an Italian opponent in the quarter finals, Luke met Tony Roberts (USA) where his run would end (3-15) and Luke finished in 4th place overall in the B competition.

In the latter stages of the Open grade, Soquette beat Irishman McCavitt 15-8 in the first semi-final and Torres (USA) easily saw of Spanish youngster Kruithof 15-3 to also make the final. The American went into “Beast” mode in the final, giving the young Belgian no chance and going 16-0 up in a short space of time. Soquette started to claw his way back into points but by then it was too late and the American took his first European title with a 21-6 victory.

The Women’s Open had 14 entrants across 4 groups and Kathleen Briedenhann made easy work of her group of 3. She dispatched Italian newcomer Cocino 15-1 before moving onto a tough game against Sophia Murphy (USA). Kathleen knew that she had the shots to beat the American and once she reached her stride her shot placement and power was simply too much for the American and Kathleen won by a comfortable 15-8.

Tessa had a tough group of 4 players which included European #6 Maria Jose Giner (ESP) and top Irish player Lorraine Havern (IRE). Her first game was against Havern who provide too strong and she succumbed to a 6-15 defeat. Tessa then picked herself up to blow away Italian Pippo 15-3 before facing a deciding match against Giner from Spain. Despite being 10 places below her in the rankings, the match was even throughout with Tessa serving extremely well, pushing the Spaniard out wide with the serve to open up the court for the second shot. In a closely fought game Giner capitalised on a few unforced errors and took the game at the end, winning 12-15. 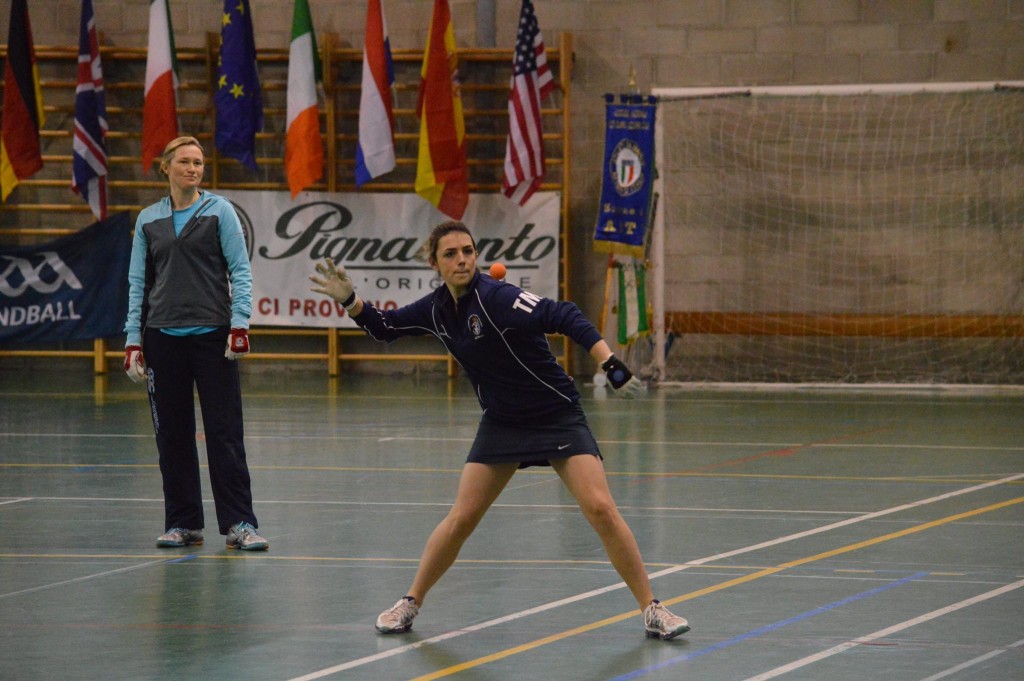 In a similar situation to the Men’s competition, Mills still had the chance to progress to the later stages of the competition but had to face Murphy (USA) who Briedenhann had beaten in the group stages. Mills dominated her opponent during the match, winning a high percentage of the rallies she got into. However in this game her serve, which provided so useful against the Spaniard in the group stages, let her down as she hit serve after serve wide of the court – 9 wide serves in total! This allowed Murphy to get back into the game and close it out with a 13-15 victory.

Briedenhann went onto the quarter finals where she faced Maria Jose Giner (ESP). The game was close all the way to the end but the Spaniard just took control when it mattered and ended up winning 12-15.

At the end of the competition, current European #1 Schaeffer (NED) lost to Monroe (USA) in a tense semi-final game 14-15 despite winning by a comfortable 8 point margin in the group stages. In the other semi-final Havern (IRE) beat Giner (ESP) 15-1 before beating Monroe in the final 21-13 to take the championship. Schaffer (NED) finally got onto the right side of a closely fought match for 3rd place, beating Giner (ESP) 15-14.

Without another UK men’s player in the competition, Stradwick was partnered with Federico Corsi from Italy in the Doubles Open who had reached the quarter finals of the Men’s B singles grade. Always knowing that the Open doubles grade would be tough for the pair, they enjoyed their games against tough opposition but sadly did not turn their hard effort into many points, firstly losing to the US pairing of Roberts & Torres 2-15 before Corsi took on his brother who was also in a mixed nationality team partnering the impressive Kruithof from Spain. The Spanish/Italian pairing came flying out of the blocks and were simply too strong for the UK/Italian pair winning comfortably 3-15.

Torres and Roberts went on to beat the rest of competition and win the final against the Belgian pairing of Soquette & Potiez in a cracking match (21-13) that pushed the USA pair to play at the very best of their game to win.

A big congratulations goes to Mike Torres who took back to the USA both the Open Singles and Doubles titles.

The Women’s Open grade consisted of 7 pairings with Mills & Briedenhann representing the UK in a group of 4 pairings. The UK pair played intelligently to breeze past their first two opponents; the Irish family duo of Havern & Havern 15-4 and then the young Italian pair of Cocino & Banaj 15-0. This left them with the chance to top their group if they won their hardest match against the Dutch/American pairing of Scheffer (NED) & Murphy (USA). Knowing that the American was the weakest link in this pairing the ladies did well to push Scheffer out of position to leave the American isolated. In a tense 25 minute game where both sides cancelled out each other for long periods the UK pairing held their nerves to complete a great victory against arguably the second strongest team in the competition, winning 15-13.

The format of the competition meant that the UK ladies progressed to the semi-finals to face the winners of a play-off between the Spanish pairing of Caballero/Giner who came second in their group or Scheffer/Murphy, who both came third in the group after losing their game against the Havern/Havern (IRE). The Dutch/American pair proved too strong for the Spanish and took the game 15-5 to progress to the semi-finals and set up a repeat of the group game. This time the Dutch/American girls attacked hard from the start and established a healthy lead. The UK ladies never reached their stride in the game and despite putting up a good fight, lost the game 1-15.

Scheffer/Murphy met the all American pairing of Figueroa/Monroe in the final that proved too strong for them and the USA duo took the game 21-11. The UK ladies met the Irish pair of Havern/Havern in the 3/4th place play-off in a repeat of their group game and won the game with a dominate 15-3 performance to take 3rd place and bring the Bronze Medal back to the UK.

A successful event for the UK team with a bronze medal in the Women’s Open doubles and all 3 players played well in their singles grades against tough competition. To single out a few players for outstanding performances across the weekend we must start with congratulations to Mike Torres (USA) who won both the Singles and Doubles Open grades in his first European outing and for Kevin Monroe, who came over from the USA to firstly win the over 45’s competition – a competition which we would like to see grow across Europe in the future years – and then paired up with Dutch player K V.D.Shoot to make the semi-finals of the Men’s Open double. P V.D.Shoot also played superbly over the weekend, winning the Men’s B competition and coming third in the Men’s Open doubles with his Italian partner Y.Trentin (ITA). For the women, congratulations go to Lorraine Havern for her successful return to the 1-Wall court with the Open Women’s Singles title.

A big thank you must go to Massimo Corsi and his team who put on a superb tournament despite the last minute problems with transportation to Italy. As always all players received a warm welcome and great hospitality and the UK team are looking forward to competing in Italy in the years to come.

The European Pro Tour is now on a summer break and the next stop will be the Spanish Open – their first ever competition in the Pro Tour – in October 2015. This August sees Canada host the 1-Wall and 4-Wall World Championships and the UK will be sending over some men and women to compete – keep in touch via twitter and facebook to receive all the updates!