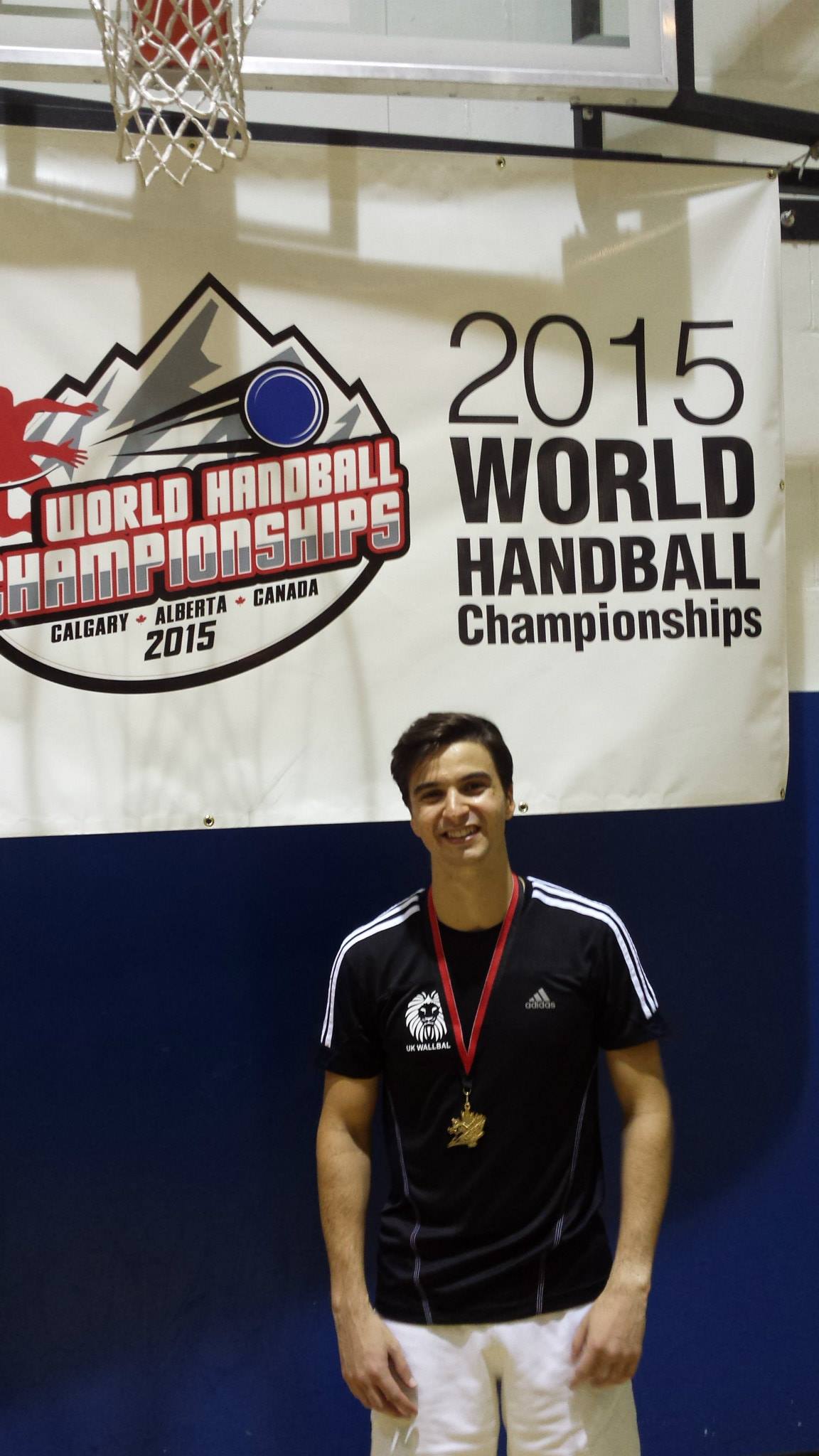 The team travelled far across land and sea to reach their destination and joined over 700 other competitors, from 12 different countries to battle it out for the biggest title in Wallball.

Let’s start with the main result; first up from the men was Dan Tristao in the Men’s B category with an early game against Niall Flynn of Ireland. The game was close for most of the duration until right at the end when Tristao sneaked a couple of points ahead to take the game. It was an incredibly tight affair and both players really proved their worth on court. Although early on, hearts were in mouths from Day 1!

Eventually Dan came unscathed into the semis. Here he played Eloy Vela – a guy on the cusp of the Open standard in New York and someone hotly tipped for the title. We were worried, but we needn’t have been; the game was truly spectacular! Dan ran from side to side and retrieved outstandingly. He put Eloy away again and again and won 25-14.

This victory secured him a place in the B grade finals where he played Anthony Delgado. This tall American plays weighted shots and has a tremendous left-handed spike. This game went the distance, with both players having their opportunities to walk away with the crown. The three set thriller went on for over an hour. Dan played with his usual athleticism and chased down ball after ball. Anthony raised his game in the 2nd set and dominated in the beginning of the 3rd. But then he went for a spike and missed it by a millimetre. These things make all the difference in a game like Wallball, and Anthony seemed to become slightly tentative, taking half a step back. That was all the was needed to turn the tide and Dan drew a lead together and closed it out. The final score was 21-9 13-21 11-6. Huge congratulations to Dan who was crowned the B Singles World Champion!

GB captain Dan Grant was up against Cesar Sala in the Men’s Open. Sala is a true champion of New York and plays with measured perfection. The game was exciting and the conclusion to the 2nd set was a real event. Cesar had won the first and looked like he was on track to win the 2nd. But Grant made a healthy comeback and went up on the big man 20-19. Game ball! An epic rally ensued and just when it looked like Grant had won it, Cesar dived to one side and flicked the ball with the tips of his fingers. It flew through the air and touched the crack at the bottom of the wall and rolled out. Incredible! Cesar was back in and this time he went he got his match point. Grant lobbed him but not high enough – Cesar went for a left handed spike into the bottom left hand corner. The audience gasped as this ball missed the nick by a millimetre the wrong way! Grant was back in and closed it out!

It went to a tie-break where Dan got off to a lousy start which he couldn’t claw back. Cesar took the game.

Luke Stradwick stormed through his first C-singles game 25-11.  He looked like a man on form, but sadly made some uncharacteristic errors against Shane Murphy of Ireland and lost in the quarter finals.

To kick start the tournament GB’s Kerry White played her first game in the Singles open against Monica Moya from Spain. She was not phased by the 2 hour jet lag as she got off to a good start winning 21-15 and 21-5. This put her into the quarter finals where she was knocked out by USA star Karen McConney. Kerry, GBR’s ex Captain, now living in New York, also entered the over 30s and made it convincingly to the final where she played boisterous Theresa McCourt. Although she had 2 game balls in the first set, she couldn’t convert them. Frustratingly, the second game ran away a little bit as Theresa mixed up her serve and some errors slipped into Kerry’s game. Final score 21-20 21-13. Tantalisingly close.

Tessa Mills’ first game was against Mari Rivera – a truly class A player whose serves moved Tessa out of the court and out of her comfort zone. Tessa fought hard to retrieve them but found herself too far off court to get back into the game. The power of good serve was telling in this game – it’s such a weapon in Wallball.

Next up Tessa played Ana Giner of Spain in the B Grade. She played really well, retrieved incredibly and attacked like a falcon. Her game went up visible notches but sadly one notch shy of a great victory. She lost 25-15 but can hold her head high.

Kathleen’s first game was against Shirley Chen in the Women’s Singles Open. After narrowly losing the first set 18-21 she came back to win the second set to take the game to a tiebreaker. What a game! The tie breaker was nailbiting and went the full distance. Palpitations were felt by the crowd. In the end it was 11-9 to Shirley and the crowd applauded loudly at a ninety minute game of magnificent class and great camaraderie.

Kathleen then played Sara Gil in the B’s – the clever Spaniard who out maneuverered an off-form Kathleen.

The Finals of the Ladies Singles Open was between doubles pair Danielle Daskalakis and Sandy Ng. The title was finally taken by Daskalakis in the tie breaker. A powerful outpouring of emotion on the court.

The Women’s Open doubles kicked off with Kathleen and Tessa taking on the sisters, Giner and Giner from Spain. The Spanish pair were incredibly strong and the English pair suffered a heavy defeat in game 2. The English pair then went on to take on the USA pair of Lian and Johnson from New York in the Bs. The American pair was just too strong for our girls who fought hard for each point, but sadly couldn’t clinch the winners.

The UK’s “Queen”, Kerry White then paired up with best friend and honorary Brit, Jenny Lee to take on the other Spanish pair – Monica Moya and Sara Gil. The New York style was too much for the Europeans and Kerry and Jenny safely progressed to the next round of the open. Sadly Jenny then suffered an ankle injury at the beginning of their next match against Monica Moya and Sara Gil from Spain. An unfortunate injury from some slippery courts. The pair had to withdraw from the tournament despite their strong outlook of reaching the final. 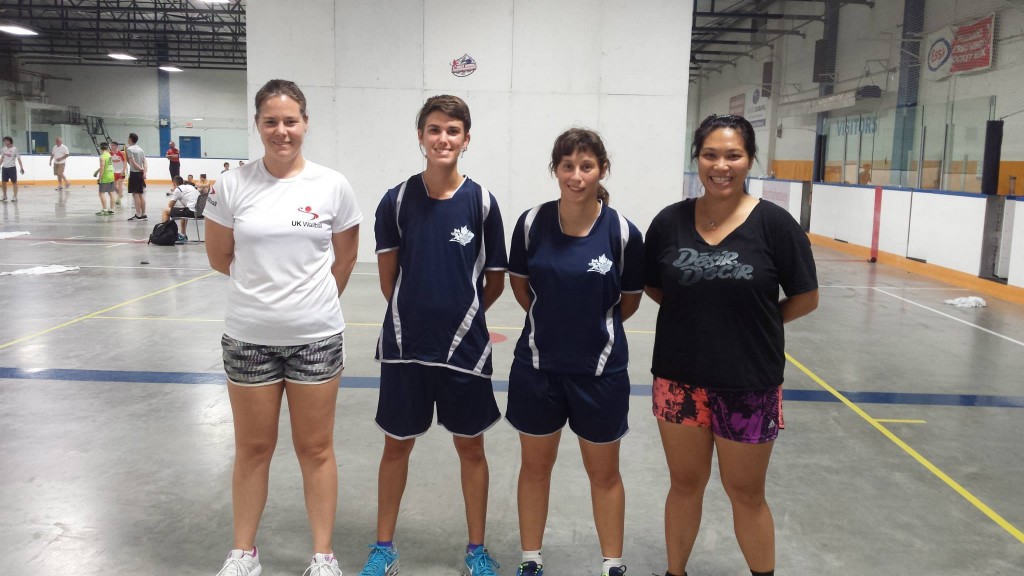 Kerry and Jenny taking on the Spanish. The pair were hot favourites to win it until injury struck

In the C doubles, Luke Stradwick parted up with Aussie counterpart Jean-Paul Baggio – the Australian mean machine. After showing strong form, they played UK Open veteran Fintan Creamer and his handy partner in the semis. JP and Luke dominated from the off and the victory was never in doubt. This put them conformably into the final where they played the Flynn brothers from Ireland. They sadly couldn’t claim the C Doubles title as they lost in two games to the brothers – two of the most sporting players on the circuit.

Dan Squared were bumped up a grade into the Open division of the doubles and found themselves playing Sala and Lopierre in the quarter finals. The game was quite tight but it was clear based on Grant’s expression afterwards that the Brits’ loss was a frustrating one.

After all the excitement of the 1-wall the 4-wall then kicked off. It started with Dan Tristao, who played well in his second game but lost to an Irishman. It’s worth saying here that we don’t play 4-wall in the UK. In fact we can’t – there’s no courts. So this is a triennial foray for us. And without 4-wall superstar, Gareth Price, our prospects were not strong.

Stradders then stepped into the mix. He got a healthy lead in the first game and lost in time for lunch.

Grant was also on court at the time playing a cocky New Yorker called Sheikh. The game was long and drawn out, like a Director’s Cut of an already overlong film. The two 1-wall players attempted to play a hybrid of 1-wall and 4-wall. It took 2.5 hours, there were crucial moments towards the end and it was a Grant who came out on top 21-18, 14-21, 11-8. The Alaskans loved it. 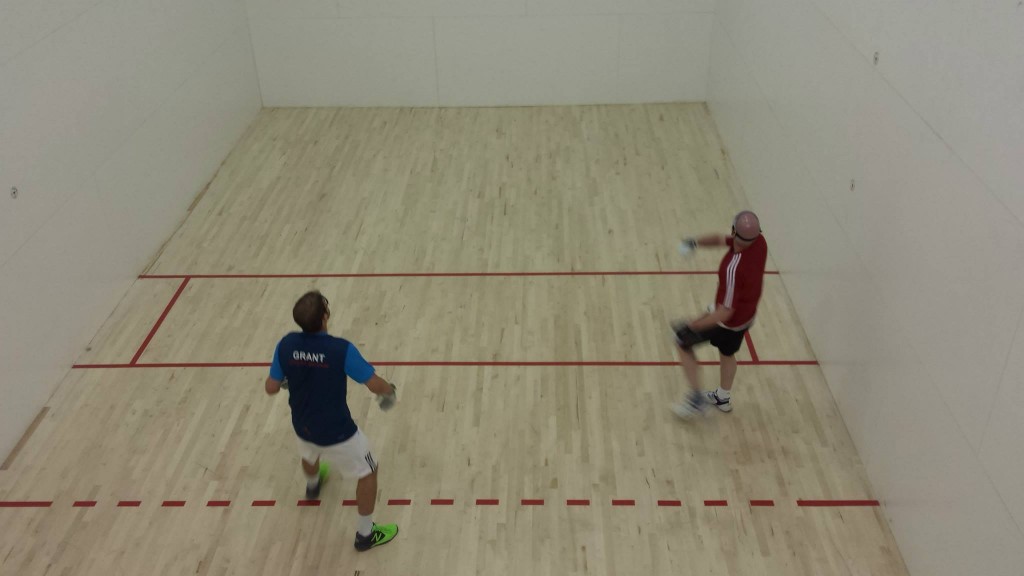 Grant getting his ass kicked in 4-wall

In the last 16 Dan Grant got taught a lesson by someone who actually knows how to play 4-wall. None of his trademark 1-wall flair making any impact whatsoever.

In the C doubles Dan partnered with Dan Tristao and the pair had an entertaining game against Dan Breen and Noel Holohan, who went on to lose in the final.

Luke Stradwick also played and partnered up with Nick Santilli from Australia. Luke, single-handedly keeping anglo-aussie relations on good terms this tournament. The pair gave it their all but were outclassed by the Japanese.

It’s fair to say that playing once every 3 years isn’t the best prep but 4-wall is a tremendously fun game!

We also enjoyed our very own Ashes. Could England destroy Australia as easily as our cricketing counterparts? This year the ashes was contested in both the 1-wall and 4-wall with 3 singles games and 2 doubles games in each code. To start things off Kathleen and Tessa took on Aussie Captain Bob Winter and young nephew protégé, Brodie Winter. The pair were deceptively good and took the English duo off guard with their flat butts. The tables were later turned in our first singles game as Kerry White demolished Damian Winter like knife through warm salted butter. 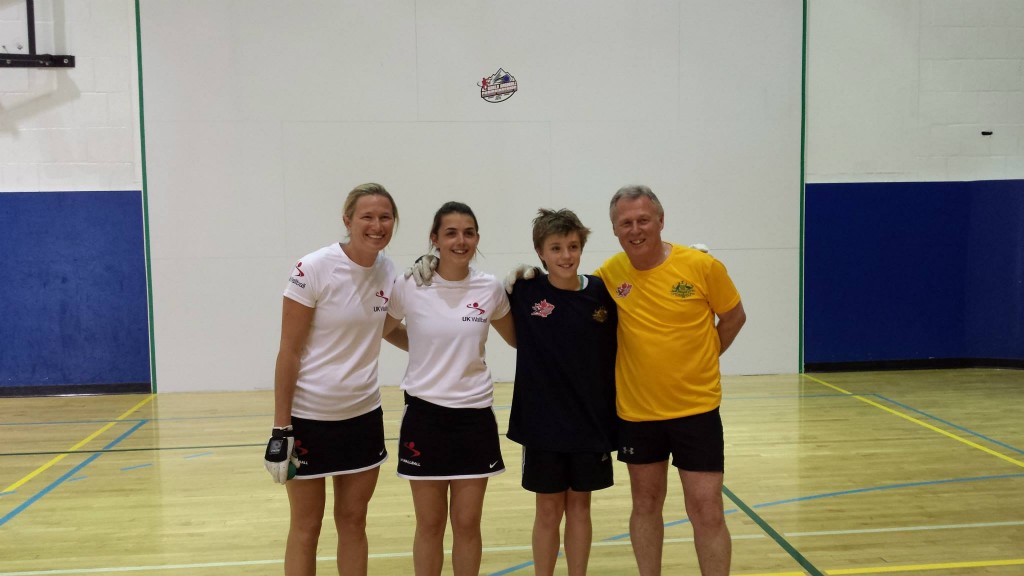 Kathleen – the Kevin Pietersen of the England Team, and Tessa served well and were solid, but were outdone in the power department. This gave the Australians a 1-0 lead over England. The last evening of the 1-wall proved to be a whitewash affair. Dan Tristao played Dom Morabito in the singles. Left handed Dom played well and spiked when he could, but DT was a man on form. Then Dan Grant played JP Baggio – immediately lacking half the support he’d just had in the C doubles.  JP played exceptionally well and pushed Dan hard, but the England Captain put on some gloves and managed to win 15-9.

Finally, the Dans combined to take on Dom and JP in the doubles. This was a match of increasingly spectacular finesse and quality. The Dans were too strong for the sweat drenched Aussies and took the game 21-15. This put England into the 4-wall series 4-1 up at the half way point. Sadly the tournament schedule was jam-packed and we weren’t able to get the court time necessary to complete the series. Therefore this Ashes series rolls over to the next 4-wall event with England 4-1 up. It was great to enjoy friendly competition with our Aussie friends and we look forward to continuing with the Ashes series in years to come. 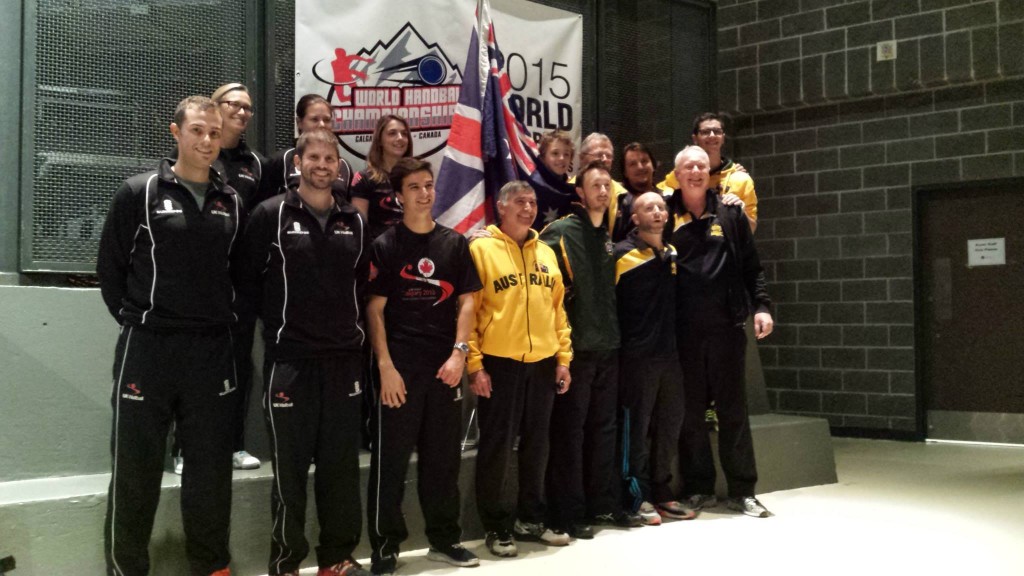 The Brits and the Aussies

Despite some organisational glitches it was a fantastic event where we enjoyed great competition, sportsmanship and camaraderie with friends we have made from all over the World. We would like the organisers of the event – especially the volunteers who gave their time so freely and generously. We’d also like to thank everyone who supported us along the way and followed our feed back in the UK (and around the world). We are now setting our sights on the next Worlds which will take place in Alaska in 2018 but that doesn’t mean any rest for the team as the players gear up to take on the European Wallball ProTour.